With all the talk about finishing my GSC army for Shorehammer, I thought I would show off what is painted. It is not one of those 25,000 point monstrosities that you see on Reddit all the time but it is not bad for being a secondary army that I just started two years ago.

All that I have left are four bikes, two Ridgerunners, a Magus, a Kelermorph, a Santus, and an acolyte to finish painting.  I have a couple of acolytes and a new set of abberants to build as well.  I am not sure there is anything else I want for this army.  I really need to settle in and figure out what direction I want to take them before making any other purchases. 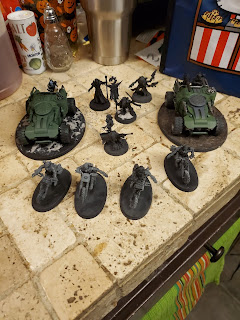 Next on my list is to paint the custom Deff Dread for #Dreadtober.  Once he is done I will finish the units I have built then I think it will be time to focus on my Sisters of Battle.  I have a few of the old metal ones to paint up before the big release. it is almost time for the big release!

Questions? Comments? For the four-armed Emperor!!!