Impressions from the table: Daughters of Khaine 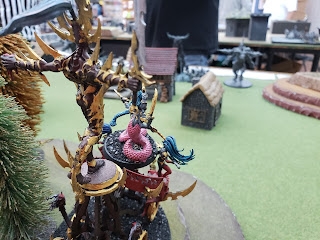 Last week I probably had my last game of the year.  I played a game of Age of Sigmar with a buddy at our local game store.  I brought my daughters along.  I don't have a blow by blow but I do have some thoughts that I thought I would share. 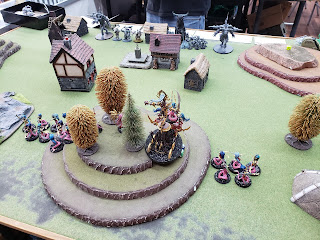 First of all my army was a very elite force.  I am not used to that.  I had three squads of blood sisters, a slaughter queen on cauldron of blood, Morathi, and a unit of heart renders. My opponent played beasts of chaos and had 2 huge monsters, a squad of minotaurs, a huge squad of beastmen with big axes, a big squad of beastmen with 2 axes, some shamans, a herd leader, two squads of little goatmen, and the herdstone. I was scared by the numbers I faced but came out swinging. 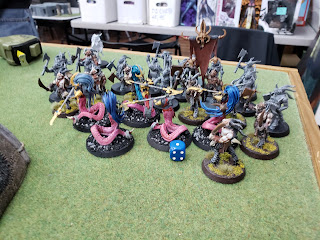 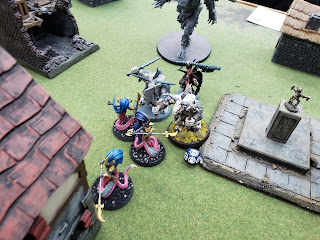 I let him go first thinking he would have to cross the field to get to me.  He had some ambush units try to catch me off guard but failed his charges.  I then responded with charges of my own and was able to keep my units in the bubble of the cauldron and my commander's trait for extra protection.  +1 armor and fanatical faith on a 5+ is super handy. 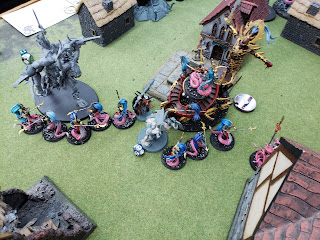 In the end, I had 3 medusa left and all of my leaders.  Morathi is a strong unit.  The ability to only take three wounds a turn allows me to use her more aggressively.  She went toe to toe with the big minotaur monster and then a huge squad of beastmen.   My spells and prayers did not help me much.  I kept rolling low and failing to cast them. 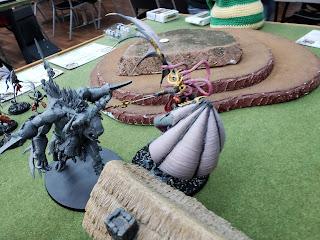 I was disappointed with the heart renders again.  They seam to come down cause a wound then do nothing the rest of the game.  Maybe in a game where objectives randomly show up, they might be of some use but I am not positive.  Maybe a larger squad might help them as well. 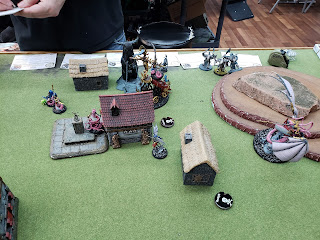 Charging in this game is a lot different than 40k.  When you spread out the units you charge you open your other charges to be attacked before they get to swing.  It was difficult to decide which to attack with first because my other unit would get hit.  When you have two small elite forces facing two different hordes you have to decide which to sacrifice.  It can be a hard choice.  Unless you are those stiky fish people who get to attack first no matter what.  MAybe I need some sharks...