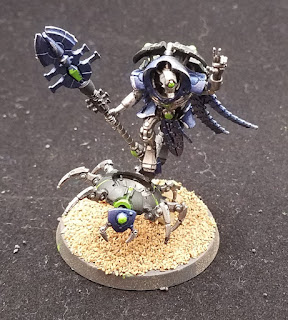 It was hobby night at our house last night.  I finished the slaughter queen as seen in my last post and then finished the new cryptek from the Forgebane box. 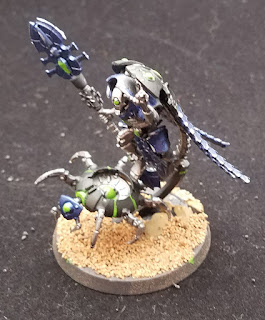 This is the first plastic cryptek from Games Workshop. The old one was a finecast model that had a drooping staff of light. This new model does not have that problem and has a cool new pose. 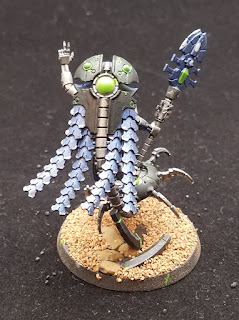 The new pose comes with new wargear. The canoptic cloak allows my cryptek to keep up with the destroyers and wraiths.  Doing this you lose the 5+ invulnerable save given by the chronometron.  In essence he will give a +1 renamiation protocols (RP) to the units he is following around. 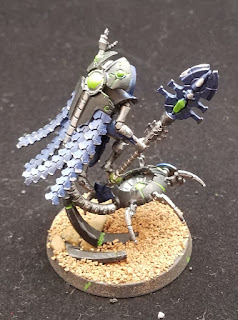 This is good news for the destroyers but the wraiths don't natively have RP and cost two command point to give it to them for a turn.  With that being said wraiths already have a 3+ invulnerable save so they don't care that their escort lost that ability. 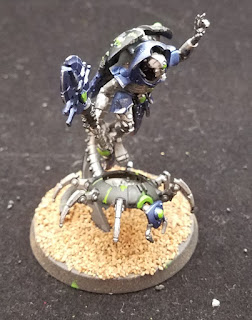 Looking at my two options, if I plan to take a destroyer or wraith heavy list I will probably take the cloak wraith. If not I will fall back to the foot slogger for that added protection.

With the cryptek complete I can move on to my second armiger, the tankbustas, the ghostkeel, back to the fire raptor, or some hive guard. Still a lot to work on.
Questions? Comments? We'll be backs?
Posted by Grenn Dal at 12:12 PM