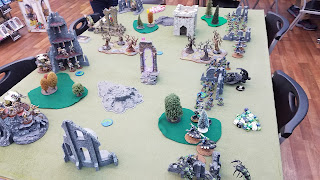 After what felt like forever I finally got a game in.  I got to play against Dan from The Lonely Havocs and his DeathGuard army.  He was nice and didn't bring Morty. 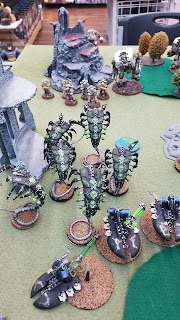 I Started with my wraiths and destroyers moving up on the left flank.  The destroyers did a couple wounds but nothing of consequence. 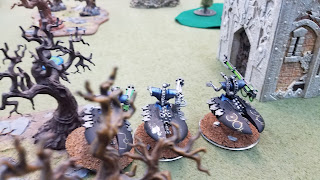 My other destroyers moved up and did a couple wounds to one of the Foetid Bloat-drone. I was hoping to do some decent damage but they were pretty resistant.

On his turn he put most of his shots into my wraiths and took out all but one. 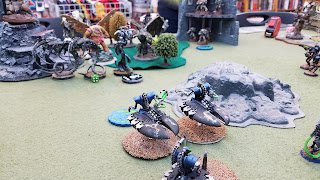 Turn two I spent command points to reanimate my wraiths getting 2 back.  They then assaulted the Leviathan Dread with my C'Tan.  Hey wiffed horribly.  My opponent backed up and took out most of them in shooting.  Luckily my Ctan blewup and put a few mortal wounds on the Demon Princes. 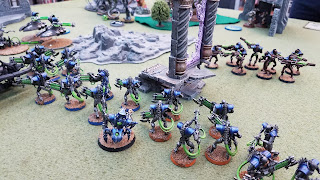 My Immortal moved up but did not have a lot of range to anything yet.  My Deathmarks came down and did not do much killing a couple of Plague Marines. 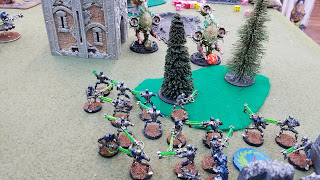 My warrior blob held on and prepared for the goop from the drones. 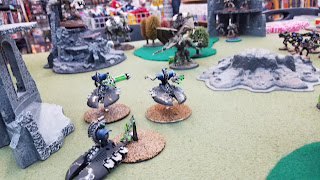 Turn three after my opponent deleted my wraiths I repaid him killing his warlord with my destroyers.
I need to do some work on these guys to get them in playing shape.  They seem to do some good work. 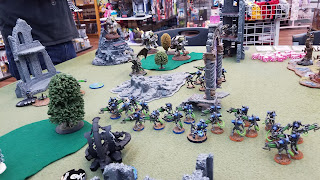 My Deathmarks brought the second daemon prince down to one wound.  I just couldn't finish it off. 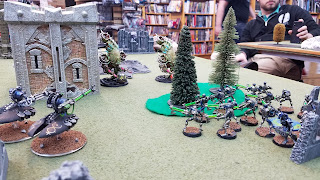 While he took out a bunch of warriors they held and just stood back up. The destroyers poor all they can into the drones but they both still survive. 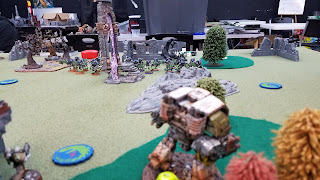 At this time his leviathans started deleting a unit a turn.  First were the destroyers. 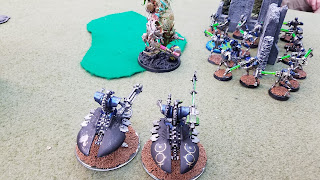 My warriors fell back and destroyers took out one drone and wound the second. 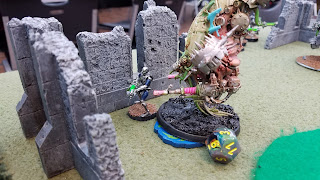 A lone warrior remained standing at the bottom of turn 5. With cryptek support they are pretty durrable. 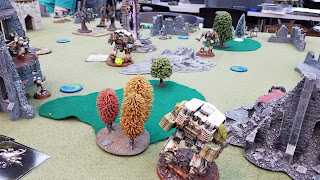 The march of the Dreadnaughts took out all my Immortals and all that was left was Szaras. The butcher cannon variant is just down right mean! 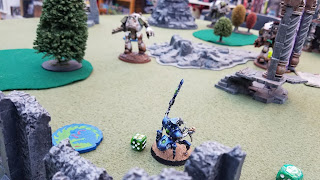 Szaras was shaking in his gears not looking forward to a turn 6.  Lucky for me the game ended. 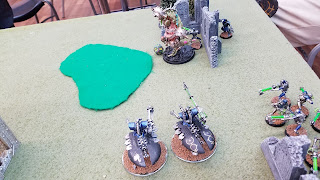 The destroyers were ready to pounce if we did move on. 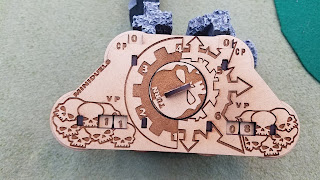 The game ended 11-8 for the necrons.  It was a tight game with a 4 point turn for the Death Guard on turn 5.  If we went on to turn 6 or 7 the outcome could have been completely different.

I had a lot of fun and I hope that this is the first of many games I get to play.  It has been too long.  Next time I am going to play my admech with baby knight support.  I am looking forward to it.

Have a good week.  check out the The  Lonely Havoks on YouTube.  They are a bunch of cool guys and have a great channel.

Questions? Comments?We'll Be Backs?
Posted by Grenn Dal at 10:55 AM