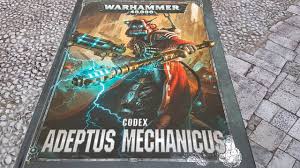 Today I am going to focus on Mars and the only named character for the Ad Mech, Belisarius Cawl.

The Mars Dogma is very strong.  At the start of every turn you roll 2 dice for your canticles instead of one and receive both results. This gives you more chances to get the canticle you want as well as possibly getting two canticles.  This is very powerful and very handy.

The warlord trait grant the warlord +3" to warlord leadership auras.  extending the bubble and extra 3" will make it easier to have your units re-rolling ones from The dominus's aura.  While not game breaking it is a nice perk.

For 2 command points the Mars Stratagem allows you to select one unit in the shooting phase and   wound rolls of 6+ deal mortal wounds in addition to other damage.  I can see this being helpfull with a full squad of vanguard or Robots.  They both have a high rate of fire and increase the chances of those 6's.

The relic for Mars is the red ax.  This is a ax that is +1 strength AP -5 and 2 damage.  It is nice but nothing earth shattering.  Like all the other melee relics I just don't want to be in combat to use the shiny toys.

Mars is a decent forge world.  The two canticle is right up there with the -1 to hit from Stygies VIII.  The warlord trait is nice as well and I can see a use for the Stratagem.  The one hohum from them is the relic. The one thing that makes Mars stand out is that it is the home of Belisarius Cawl. 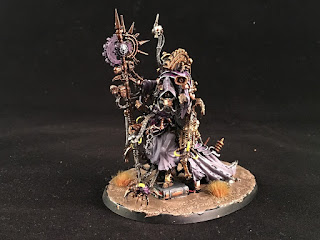 He is still the same guy but now that Mars has rules I think Mars is the top choice for the Ad Mech.  His bonus's are direct multipliers of the Mar's rules.

For the Dogma he is allowed to add one or subtract one from your Canticle rules.  This means if you roll doubles you can still get two different results.  It also make it easier to get the canticle you want.

He also has a better aura than a dominus allowing you to re-roll all misses instead of just 1's.  using the warlord trait just increases his bubble to 9"

I plan on using him in most of my Ad Mech armies.  Maybe he will be the big push I need to help me get a win with the Ad Mech.

Next up I want to go over the rest of the stratagems and relics to wrap up the amry review.  I hope this has been helpful.

Questions? Comments? For the Omnissiah?
Posted by Grenn Dal at 12:30 PM