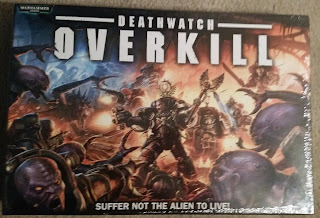 If you have been following my blog you would know I am excited by the new genestealer cult that came out this week. Since I am watching my hobby budget, I thought I would start with an Overkill box set.
I have gone over the bonuses of the Overkill box before. It is a great way to get some bodies on the field.  If you can find someone to split a box with you I highly recommend it.

The one thing that this box doesn't have is some of the special wargear. You get 12 standard Acolytes but you don't get the heavy melee weapons, icon, or leader.  All of these things are things I would want in my squads. 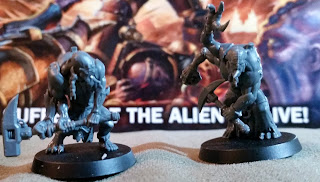 The model go together rather well.  They are highly detailed.  The one drawback I found was the amount of mold lines. The worst are the ones going straight down the forehead of the models.  I  worry about removing details of the head crests while I remove the line. 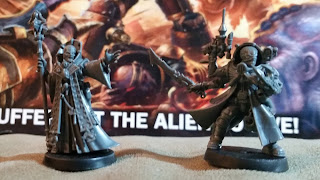 The Patriarch model is a lot like the other brood lord models out there.  For this version they added the brain detail and a large tail. They continue to have them crouching atop a random bit of terrain. 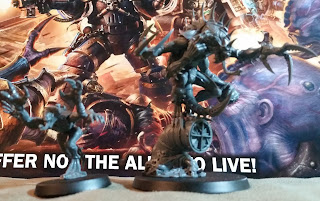 The genestealer is just a plain genestealer.  It does come with a 32mm base so it is different than the rest of my genestealers.  At some point I will probably grab some of those extension rings so I will be up to date and uniform across the army. 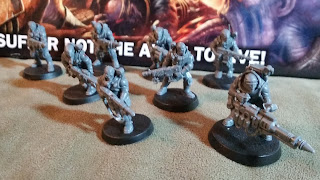 I am wondering how to paint these guys.  They will be part of my hive fleet Sivak so I am going to do a light blue skin.  I am thinking a dark green mining suit with yellow cloth.  I should have a test model up sometime next week.

So with this box and what I have in IG and Tyranids almost have a 1500pt army.  I need a Sentinel for the Neophyte Cavalcade formation. I could use some more neophytes but guardsmen work just as well. I also need some metamorphs for the Subterranean Uprising formation. Not a bad start.