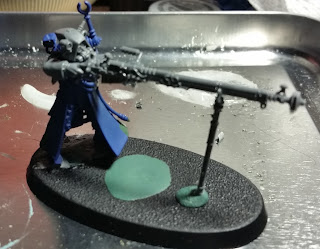 I started working on the Skitarii than I got used.  I need to clean them up or repair them as well as I can before I can get them onto the playing field.

The first model I worked on was a ranger with the sniper.  I had to remove the arms and head as well as the base to prepare it for the sniper rifle. Fortunately the coat on this guy was close so all that was needed was a little liquid green stuff.  Once done, I added the new bits and he is ready for a new basecoat.  I need to wait for a less humid day to prime him. 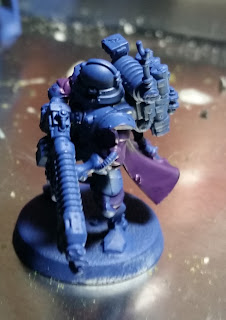 The next guy had the front parts of his robes chopped off.  This exposed a leg.  While the pose is a bit off and the plasma gun is missing it's ammo. After a little flash cleaning he will be ready to paint.  As you can see, I have already started.

The next 2 have the robes mismatched.  I need to decide if I want to keep it this way or trim it down line the one above. 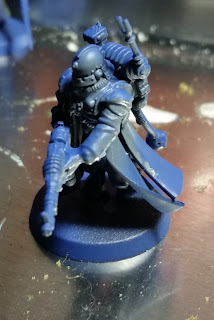 This one the par overlaps and there is little I can do to fix this gap.  I can either paint it up as 2 separate cloth pieces or trim off the front and let the tails hang down Like the one above. 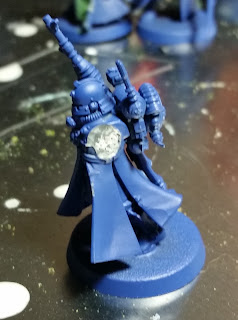 With this one I think I could green stuff a bridge to make the 2 parts one.  I am not sure how hard that would be.  I am thinking that it might be better to trim it and have it match the others. This one has a backpack for the haywire gun but no haywire gun.  he had the pointing arm attached to another arm making a super are.  and another arm fist pumping.  I quickly removed them.  I will have to get a haywire gun bit to complete him. 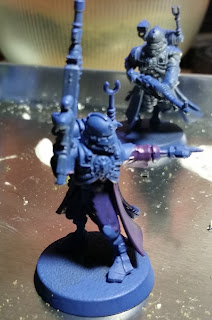 This is another one that was trimmed.  Also the armor on the leg was melted to the point where it lost most of it's detail.  I am going to paint it as fold in the pants since the detail was lost.

In the end you get what you pay for.  I got these guys for roughly half of retail.  I am not sure I will do this again with out looking closely at the figure.  they looked ok in the distance shots.  I am sure once they are painted and place with my other models they will look just fine for table top.  I am not going to win any golden daemon or crystal brush with them but then again I don't think they would hurt my low score anyway.

Let me know what you think I should do.  Should I trim off all the parts I can't fix or should I just keep them as separate pieces?