I have never been that big of a fan of the Admech.   I always thought of them as kind of gross with replacing body parts with tentacles and other mechanical devices. That is until I saw these walkers. (all pictures stolen from Facebook.)

I find these guys to be just awesome looking.  I really like the Dragoons. This is what I want my rough riders to look like! After I stopped drooling I started to look at the rules.  They remind me of weaker faster killa cans.  The are armor 11 all around which with all the S7 flying around (or Gausss) it is not hard to glance them to death before they can charge. Once they do charge they don't hit very hard either.  with the lance they get 4 attacks at I6 (good) S8(good) AP-(oh no) where 6's get you 2 more hits (yea Tesla).   This means they are not blowing up tanks and not killing any infantry (ap - really sucks).  We can switch out the lance for a 2 shot sniper rifle which on 6's causes 2 wounds.  This is decent but not for the cost.     At leasce they have the 5+ cover save.  I have a feeling that thes guys fill the roll of the rough riders.  Melee for a non melee army.  Can do some damage but will die to anything with a hammer or fist. Granted not all armies have that in abundance but then they have other ways of bringing them down.  I would love to waste a chunk points on these guys. 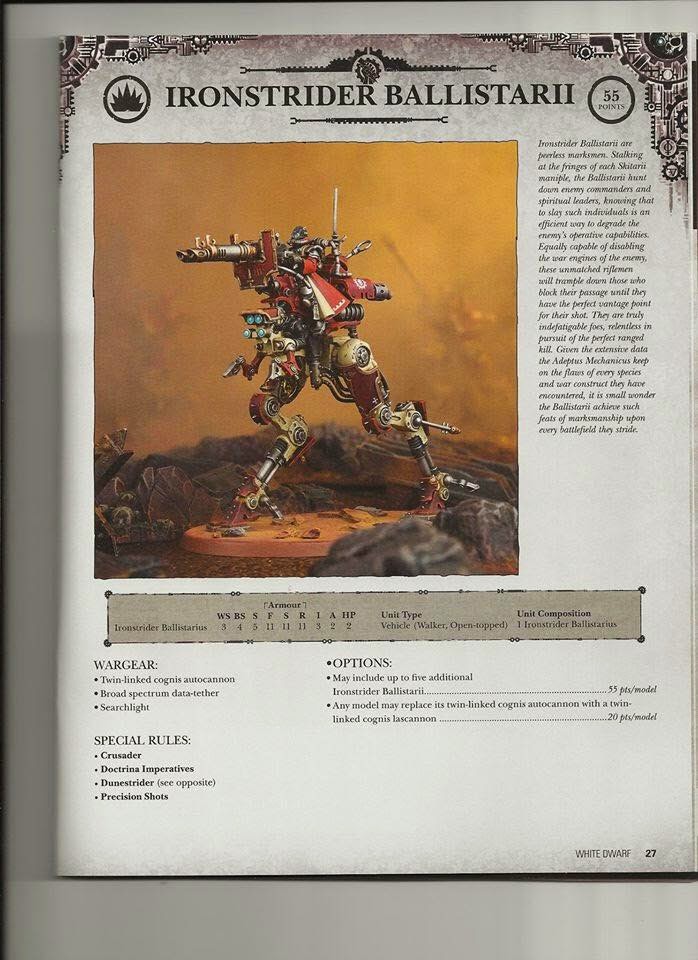 The other option is the long range support for the army.  Think heavy weapon team or sentinel.  But these guys have either a twin linked autocannon or more a twin linked lascannon. Another bonus is that they snapfire at BS 2.  Not a huge boost but add in twinlinked and you are becoming more reliable.  Just ask the Deff Kopta how good is BS2 re-rolling. Overall I think this option is more viable not as cool looking but will be more productive. 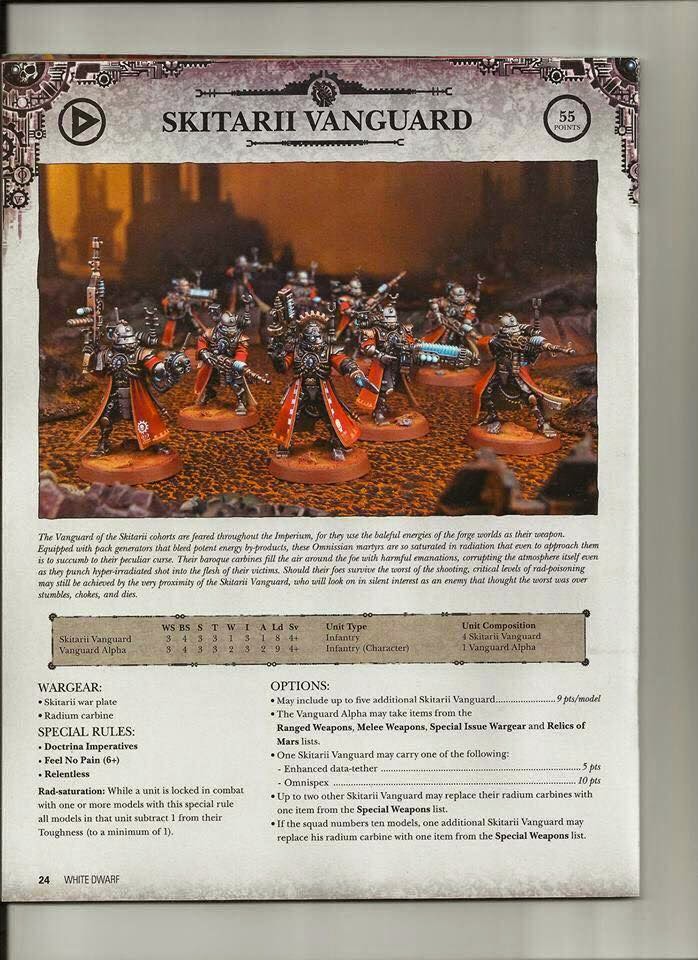 Then we have the troops.  These guys are like Scions with a 6+ feel no pain stat wise.  Their main weapon is pretty unique with it causing 2 wound on a roll of 6 with 3 shots a unit of 10 has the potential to cause a bunch of wounds.  The more I am thinking about it the more I like it.  The S3 kind of hurts as does the ap 5 but with 30 shots hitting on 3s and wounding on 5s or 2 wound on 6 you stand a chance to either force the player to makes some saves or remove a bunch of horde models (orks, grots, gaunts, gargoyles, guard platoons.) The up grade get a little pricey but they are pretty.  a S6 Haywire gun  or a 3 shot plasma gun that is a set 18".  heck I might run a bunch of 5 man with 2 of these guns and call it a day. 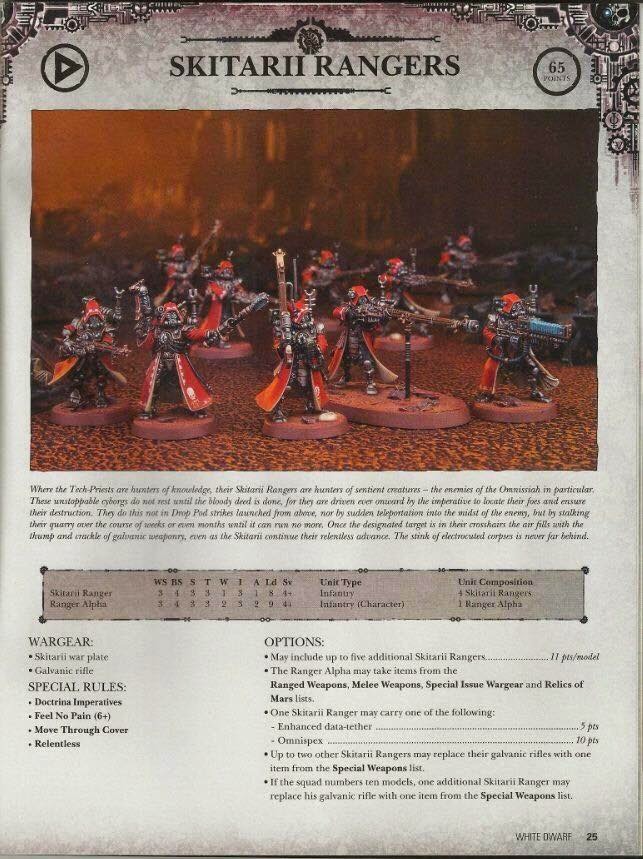 The rangers are similar to the vanguard but with different base guns. They get the higher S4 and lower  AP4 a longer range but rapid fire.  so 10 of them has 10 shots at 30" and 20 shots at 15" Not as much firepower but heavier hitting.  They get the same options for special weapons.  They also gained Move through cover.  Looking at the models I think I like the helmet of the vanguard a little more than the robe.  I think both are better than the IG guys with the exposed face but on par with the Scions.  If I was starting fresh I think that I would have a hard time picking which I like more. Scions or Skitarii.  Good Job GW

The last pick I have is something we caught a glimpse of in the video.  It reminds me of a Sentinel crossed with a defiler (or Stalker) crossed with a battlewagon turret. I need to see more picks to figure out if I like it.  Looks like it have a multi-melta though. If anything I want those legss for a Deffdread.

So there you have my first impressions of the new Skitarii models and rules.  I am on the fence about these guys.  Over the next couple of weeks I can debate and decide if I am going to shelf all other purchases for the year to get a small force of these or if I will pass and keep filling out my orks and Sisters.