After working on Tau and bugs I thought I would switch up and get some boys ready for January.  Here is what I have on my plate. 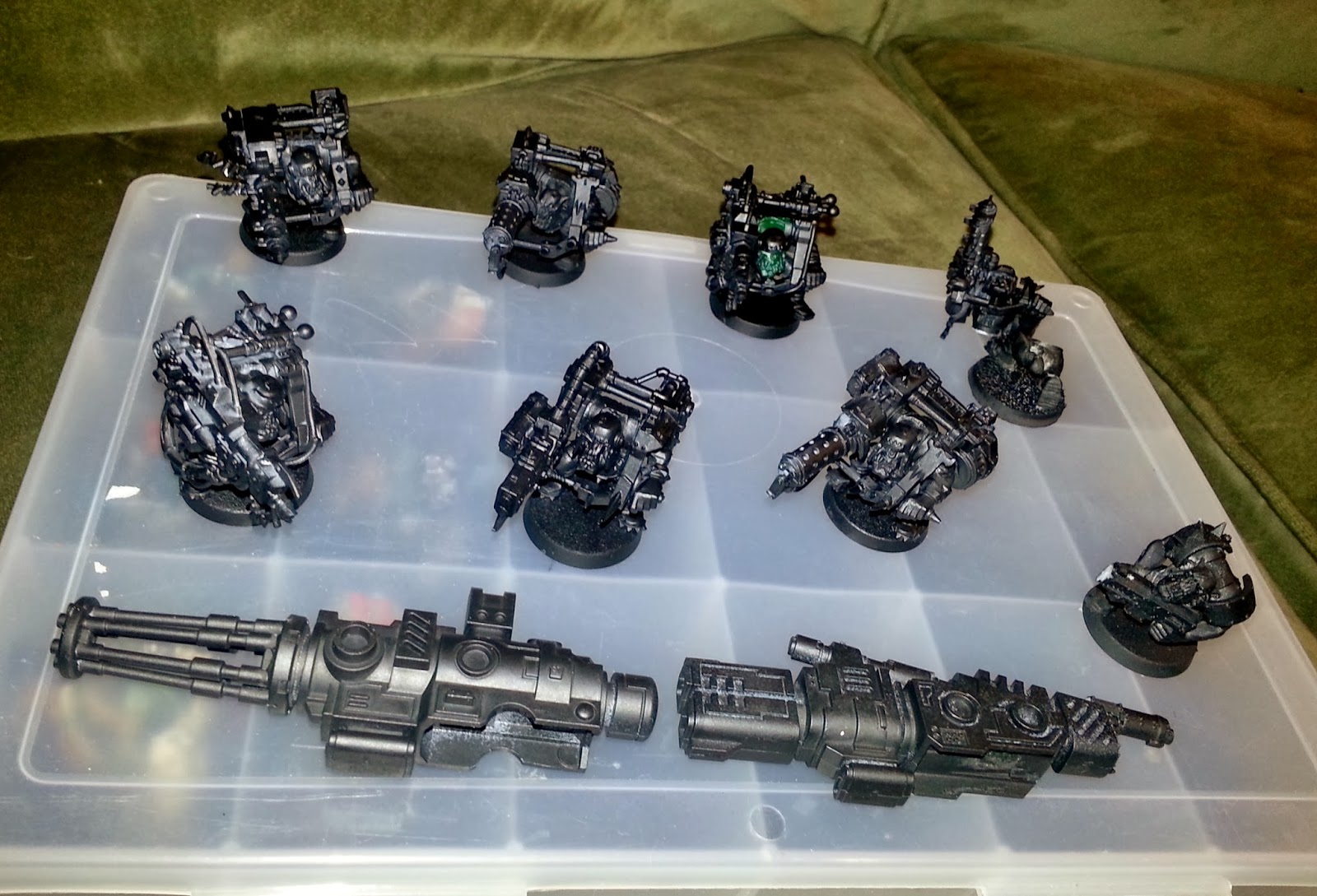 I chose to paint up the ion cannon.  This was my first ion weapon for the Tau so it is how I will move forward from now on.  I like the look.  I can and will add some highlighting later but for now he is done.  I need to do the chain gun sometime and his other weapon systems but until I run him I am not sure which systems to add.  Suggestions are welcome. 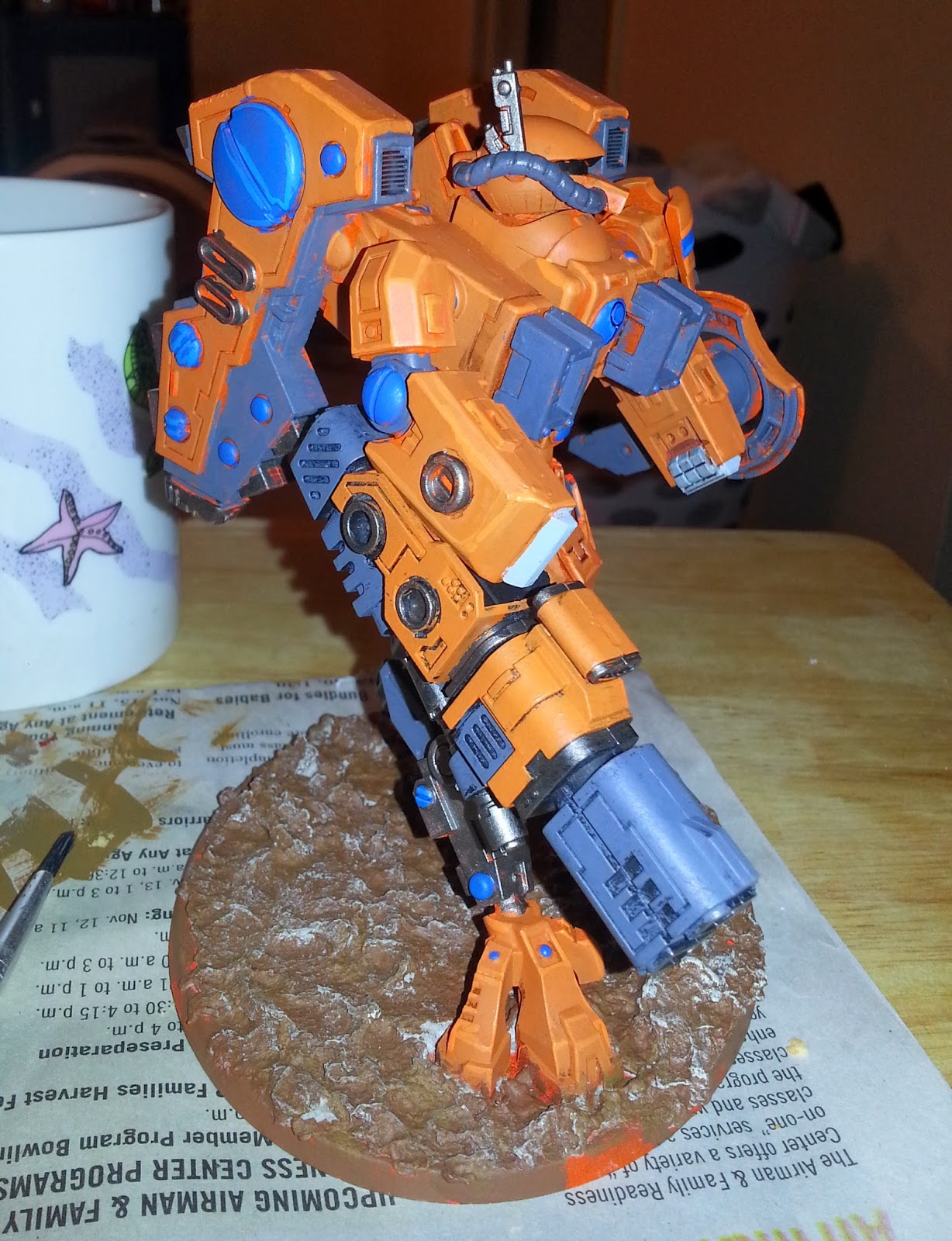 I was going to work on the swarm lord or paint up more termagants but I decided to put away the bugs and bring out the orks!  I had a half completed group of loots to work on.  One was broke in twain and I big shoota was busted so I needed to fix that as well.

I first fixed the loota then had to pin the gun back together.   This shows me I need a smaller bit as the paperclip was way to small to use as a pin.  I ended up using some green stuff to fill the hole then use the paperclip to pin the parts together.

I then started painting the lootas.  I didn't do any progress shots, sorry.  If I get any more work between now and the wedding (highly unlikely) I might do a step by step of how I paint my orks. 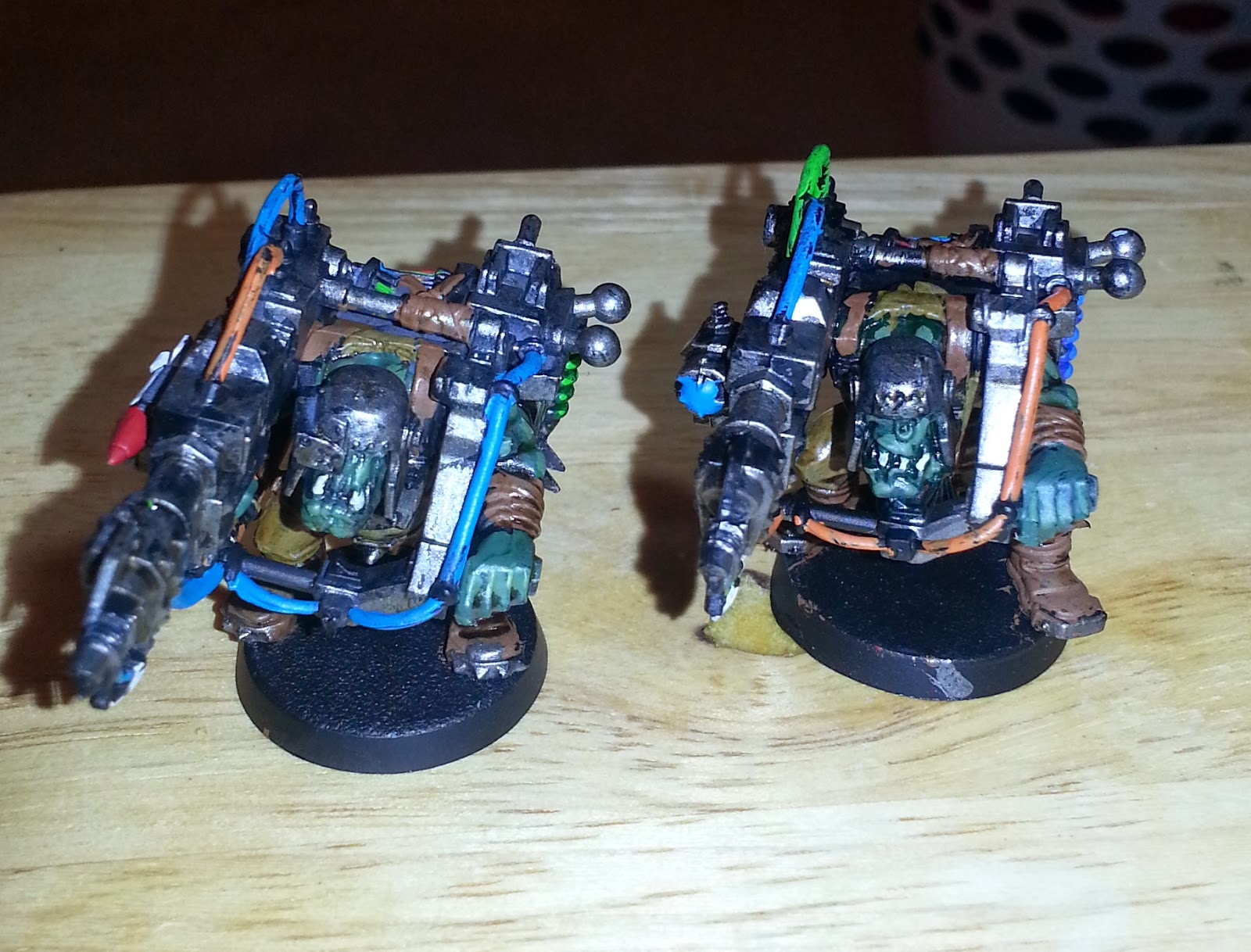 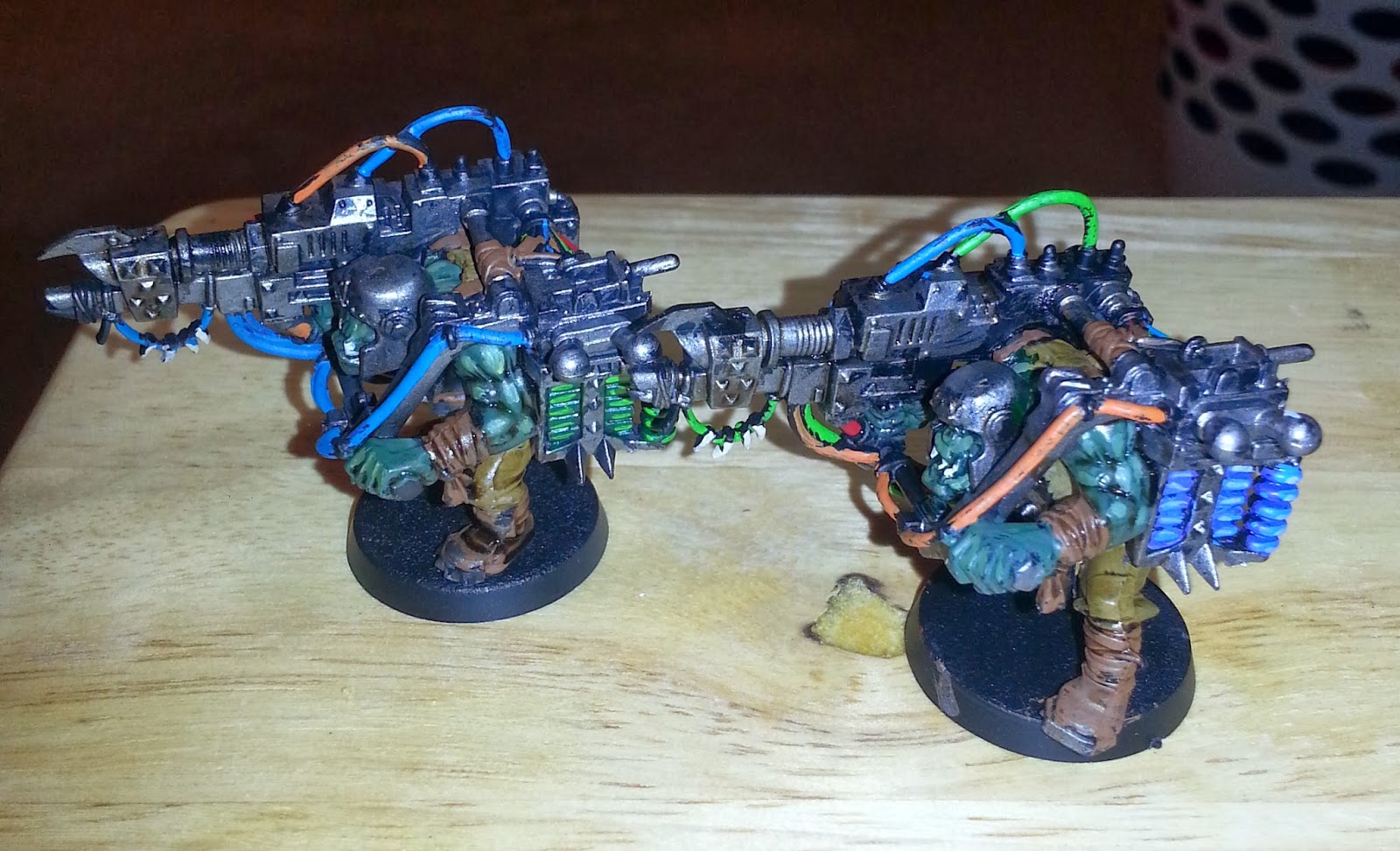 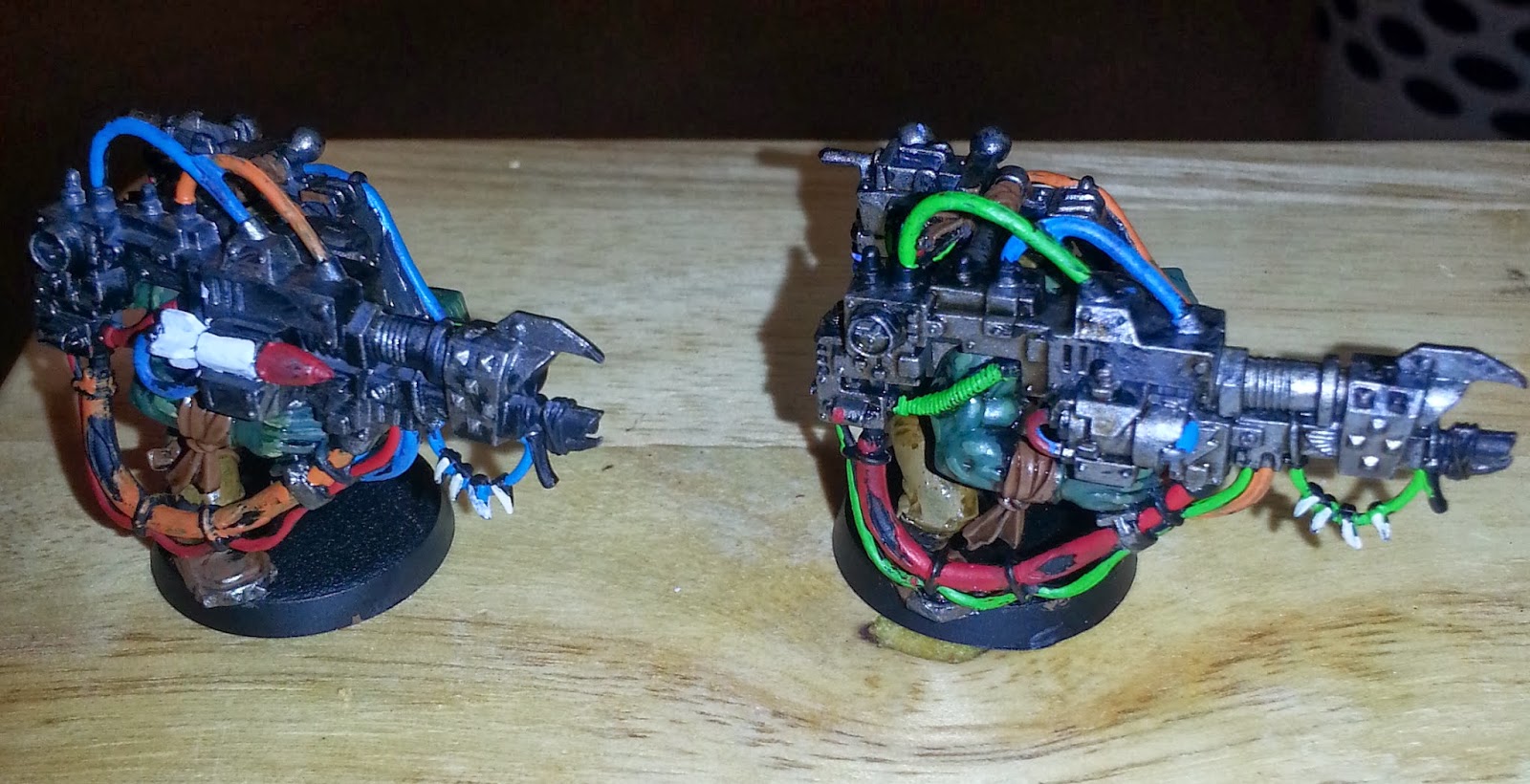 Orks are always funny.  I like how I can work more carefree with them.  I tried to do some highlighting on the power cells but not sure how good it turned out.  all in all they will look good on the table and that is all I really care about.

So I finished 2 of them bringing the total up to 9 done and 5 to go.  I need to make 1 more if I am going to field a full squad but where can I find just 1 loota.  I guess I could just get another pack but it comes with 4. I have seen some peoples conversion and I am not sure I like them.  The nice thing is I can then get some boyz and covert out some burna boys as well.  The disappointing part of the pack is the mek boy.  I wish the pack was 5 lootas/burnas with the options for a rocket, big shoota or mek.  Oh well.  I guess it is their way to get you to buy 4 packs instead of 3. grrrrr.

Alright I am off the soapbox.  I will finish up the lootas and then maybe work on the dakajets, my red battlewagon, paint up some shoota boyz,  or start on my burnas boyz.  whatever come next will have to be after the wedding.  I think things will be pretty silent for the next 2 weeks so I apologize.  I might have a short post if the bugs do get officially announced but that will probably be the it.  until next time...