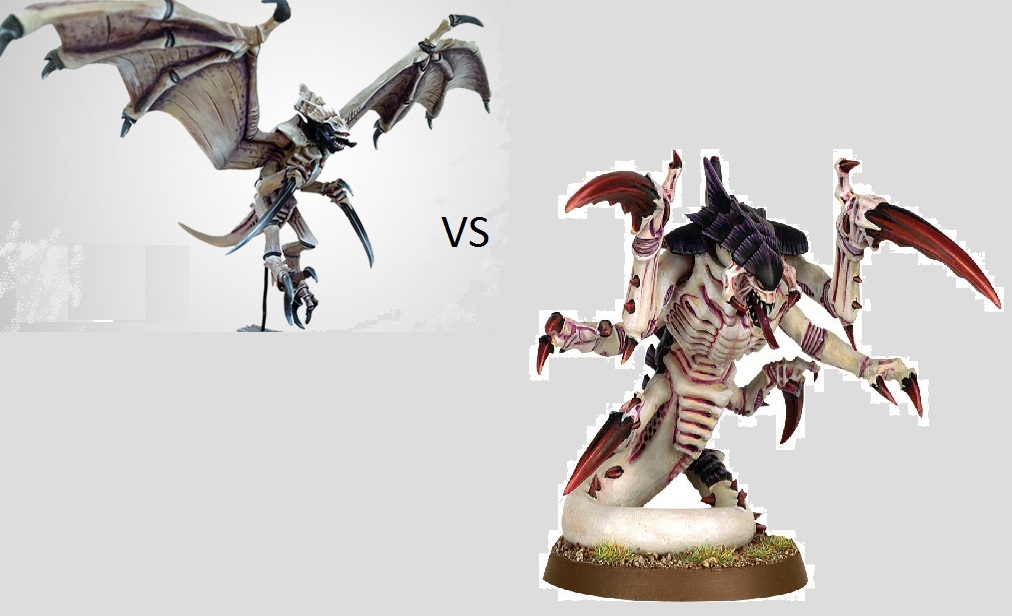 All this year I have been playing Tyranids trying to improve my game playing and to prove that Tyranids are not the easy win for the opponents. During this time, although I have not kept track I feel that I have even broke even or had a winning record. I have tried many of the different units that I had never tried like the parasite and mawloc.

At the very beginning of the year I remember running a small 3 man shrike squad along side the raveners.  It seemed that the raveners did better so I just dropped them.  I also didn't have a model for them so I felt bad using proxy models for them.  After I saw the bits that Chapter House Studio is producing I thought I might want to give them another shot.

The main competition for the Shrike is the ravener so it is only fair to compare the 2. First lets look at the statline.

So right off the bat we see that the Shrike loses an attack and is a little slower. They both have a 5+ and are ID to strength 8 wounds.  The shrike does have the LD 10 and comes with the all important synapse and shadow in the warp.  In the days of psychic powers, having a mobile Shadows is helpful. Also they will not run away after taking a few wounds since they are synapse.

Also on the surface, the differences between beast and jump troops are noticeable.  while each can go 12" in the move phase the beast just slide along without any worry when going through terrain where the Shrikes have to take dangerous terrain  tests.  On the plus side they might get some hammer of wrath attacks when assaulting in.

The base model of the ravener comes with 2 sets of Scything talons for 30 points each.  I typically add in a devourer and trade in one set of talons for rending claws.  Bringing each one to 40 points. The Devourers help soften targets before I assault them and the rending claws help take out those pesky 2+ or 3+ armor guys.

The Shrikes are 35 point base.  With 1 set of talons and a devourer.  I can switch out the talons for claws to get a similar load out to the shrike for the same price.  I do lose the reroll of ones though but for 5 more points I can add-on toxin sacs that will give me the important wounds on a 4+ and reroll if the target toughness is 4 or lower.  A must have option, if it is available.

The shrikes also have several other options to consider.

First of these is one out of three can take a big gun.  but if I am going to be assaulting with these guys I don't see a need to switch out to a S4 large blast or a S6 small blast.  Maybe if they were AP2 or even AP3 I might be tempted but these guys are fast so they will either get into the fight by turn 2 or be dead.

The second option is switching out the devourers with a pair of boneswords. If you get these don't bother with the rending claws because they ignore armor.  A pair of them will cause instant death if the model that takes a wound fails a leadership roll on 3d6.  Handy if you are going up against some of they high toughness eldar or deamon guys out there.  A shrike with talons, bone swords, and toxin sacs.  will at worst roll 4 to hit rerolling ones and 4 to wound with a reroll on T4 and ignoring armor saves and can cause instant death. (Take that WraithKnight!)

The last option I want to look at is the bonesword and lashwhip combo.  This has most of the benefits of the pair of swords except the target must pass a leadership test on 2d6.  What it gains though is all enemy models in base with the shrike drop their initiative to 1.  This help with the shrikes I4 over the raveners I5. making sure that they are at least striking at the same time as their opponent. (dang cover hiders and no grenade option for us)

The bad thing is it takes away our gun.  so in a squad of 5 (the size I usually run) that is 15 chances to soften a target before I get in there.  If going up against a big mob it is a big deal.  Against marines not so much.  Over all I would probably drop the gun for the sword whip combo. That will bring them up to 275 for a group of 5 where the Raveners are an even 200.

I think in the long run the shrikes can be a better killer but it all comes down to can I get them into combat.  both will die to mass bolter fire seeing that they don't get armor saves againt them.  Also missiles, melta, lascannon, battlecannon, and many others S8 shots just gib them.  So is the extra 75 points worth it.

The one think I see happening a lot is my Raveners outdistancing most of my synapse and so if they do take a wound the run.  I can usually get them back into synapse making them fearless again but from time to time they are just out of reach.  I hate losing squads like that.  With shrikes I don't have to worry about that and if I use them with the raveners I will be able to keep up with them.

I should at least give them a try.  I will change up my current list.  I might drop the swarmlord to save some points and see where I go from there.  I hope that my rambling has helped some of you nid players out there. Have a good weekend and as always....