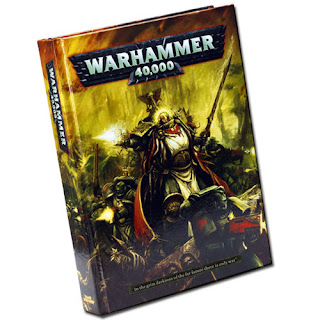 Last night I played my first game of 6th Edition.  We are playing 5 weeks of “Let’s Learn 6th Edition” with 1000 point armies.  One of the guys said he has never played orks and wanted to try them out.  I was happy to oblige.

I bought 2 twenty man squad of boyz with a PK nob, 3 mega nobs in a truck, a KKF big mek, a dakka Jet, and 20 stormboyz with PK nob.  It is a decent foot slogging army.  He brought Dark Angels.  His army was 2 squads of termies with Belial and 2 bike squads.

First turn he moved up with his bikes and blew up the truck, and my KKF saved my boyz.  Then he assaulted the mega nobs.  The bikes all died.  We then found out that since he scouted he couldn’t have assaulted but we chalked it up to lesson learned and kept playing.

On my turn I assaulted Belial and friends with a boys Squad after shooting them with my sluggas.  The slugga shots toke out 2 hammer termies while, the rest of the boys killed off the assault cannon and a lighting claw.  My Nob challenged Belial for fun and died a horrible death.  Over the next few turns he would widdle me down to 9  boyz and I finally broke.  But by this time my storm boys took out the other bike squad and the other terminators.  If you make someone roll dice they will eventually roll some ones.

My first impression of 6th is that it will be fine once we all learn the new rules and changes.  I forget the new rule and try to play the old but that will go away the more game I play.  Mega nobs look cool but a 6in move is pretty slow after their ride explodes.  I love the fearless.  Orks will tarpit units and will grind down most stuff.   Hard hitting guys  like Paladins will be a problem as will Purifiers .

I might find a use for loota now since they can move and shoot.  Heck, it is not too bad to go down to BS1 when you start as BS2.  It is those crazy marines who drop from BS4 that really are hurt.

My battle wagons might stay at home for a while… sure the deff rolla is cool but how often will I get to use it.  Those guys got blown up in the old edition a bunch I can’t see them lasting past turn 2 in this one.
I am not sure if Stormboyz are worth their extra points.   For the same points I can get twice as many boyz  and I can get some shootas to go with them.  As I see it people will want to assault me before I assault them so an overwatch with 2 shots per boy coming at you might be a good deterrent.  I mean I have to get some 6s with 40-60 shots right?

This weekend is the first tournament using 6th at the shop.  I am unsure if I am going to play since the tournament crowd has become douchey and games were not enjoyable.  Why should I waste a weekend playing with people that make the game unfun?
If I do play I will probably bring out the nids for some nom nom nom goodness.  Only time will tell.

Have a good weekend everybody!