Using the Genestealer Cult Codex as a Chaos Cults Codex

Turning the Xenos menace into a Chaos Menace, eh?
Absolutely!


As you've seen, Grendal is busy showing off his newly finished, well, Genestealer Cult everythings. I picked up my copy of the code today, intending to use it with my Renegades and Heretics army.  I know some purists are very angry/loud about demanding a new Lost and Damned Codex, or getting the Renegades & Heretics list updated (both of which I approve), but what's a nascent tyrant-in-the-making to use in the meantime? Obviously, the newly released Genestealer Cult Codex.

With just a few counts as models and some loving conversions, you can make this list into a Chaos-based cult, rather than a Xenos based one. It's a bit of a text heavy post, so sorry in advance.

So lets take a quick look down through the list and talk about what alternate models you could use to switch out for the most obviously tyranid-inspired organisms.

Patriarch - This was the hardest thing to come up with, when the idea hit me right in the face. Use a demon prince. Seriously! As long as you have a smaller base, use a slightly down-scaled demon prince, or an upscaled human/leader of the cult with many arms/big weapons. Personally, I'll be going the Magnus version, which is a lot easier to model with my limited resources.

Magnus - The new model is beautiful, and adds some much needed female miniatures to the line. Use as is, but replace the end of the staff, file off the cult symbols and replace with mini-chaos stars or symbols of your chosen god, and voila, a Magnus counts as with powers.

All other HQs - easily represented using the same alterations as above, even using the same base models. The biggest change that would be beneficial is making sure that you use head swaps to include models with hair(!) or cloaked ones as well, to subtly represent the non-xenos background.  Make sure to model your Iconward with a suitably grisly staff that is chaosy - I'll be using the love miniature from the Renegades and Heretics command squad set. Larger Chaos-y beasts could represent the abominant, as detailed later)

Troops - Neophytes and brood brothers are easy uses for your turned militia/garrison squads and miner rabble. Have fun using the kits, and definitely consider kitbashing using 3rd party bits (Or Skitarii & Necrumunda bits). For a more uniform look, consider using just one 'other' type of kit to match your chosen thing (So Cawdor + GSC Neophyt Kits could easily represent the Pauper Princes or the Rusted Cog, while Skitarii might be better bits for the Bladed Cog). 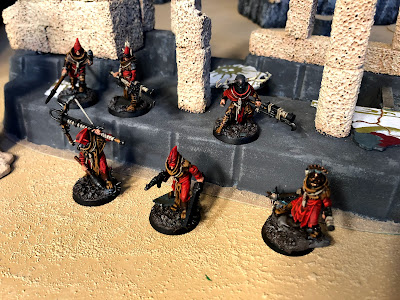 As far as the Acolytes goes, these are the more mutated members of your cult - let your modeling skills go wild! Combine with kits from the chaos range (Blightkings models are my personal favorite) and let the mutations run wild! Apply as needed to both these and the Hybrid Metamorphs below. Just be sure to model weapons appropriately.

Elites - As above, but be more selective with your kits as size matters. You want your abberants to be big. Mine are the Chaos spawn from the Rogue Trader killteam box, but yours could be the chaos spawn from the actual (OLD) GW box. Personally, I'm also going to run my Khorne Mutated Ogryns as aberrants and abominants, with the biggest one being the leader. 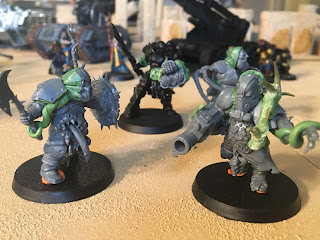 All the other models are easily represented with similar adaptations as the HQs above, but with tweaks to show the chaos nature.

Purestrain Genestealers - I struggled for a while, then realized this is where you use your chaos demons. Perfectly represented by pink horrors, bloodletters, plaguebearers or demonettes, these choices can match demons summoned by your army and show them as the actual incredibly deadly models they should be.

I see nothing to change here, other than to make the modeling tweaks above.

In particular, the familiars would be a great place to  show the chaos nature - I'll be using the little...uh...things... from the Rogue Trader box set, but nurglings or brimstone horrors would also be great stand ins.

What do you think? I'll post my temporary list at some point, but how many of you will be using the GSC codex for your chaos uprising?

EDIT HERE IS MY CURRENT LIST (no Points, but weapons mentioned)


For Wisdom (And Tzeentch)