The fine folks over at Warhammer Community have given us a preview of the new ork buggies coming out. I thought I would give my first impressions of each here and open the discussion.

First off we got to see a stratagem for our vehicles.  For a command point we get to give one unit -1 to hit during the shooting phase.  This will be handy for a mob of bikers or battlewagon full of some heavy hitters to get across the board.  I can see using this in a lot of my battles.

Next we have the Speedwaaaaaagh rule. That picks up where the warboss waaaaaghhhh rule left off.  This allows vehicles and bikers to charge after advancing.  This will help the walkers get to where they want to go before getting shot to pieces.

After that we have each of the buggies. 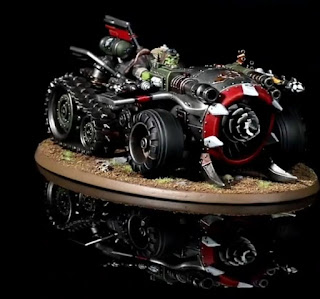 I think I will use the Megatrakk Scrapjet.  With a BS of 5+ I am not sure the rokkits will hit enough to do anything.  And in combat,  I am not sure it will put out enough damage to stay alive.  I could be totally wrong but for now I think this is my lowest priority buggy. 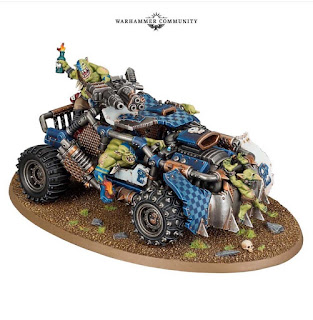 Next on the list is the Boomdakka Snazzwagon.  I like the amount of  shots this buggy has.  With 9 shots from the mek speshal and the burna bottles they can do some damage. They also have their own cloud giving them a -1 already to hit a unit of these might be able to get -2 to hit to boost across the field and into the enemy to die gloriously and explode.  It sound fun. I am hoping I don't have to put that poor little grot on the front. 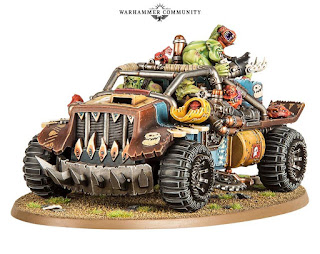 The  Rukkatrukk Squigbuggy looks decent.  I am looking forward to the heavy squid launcher to take advantage of the grot gunner and the higher output.  I like the versatility of the different shots.  It has the -3 AP bitey squig for those 2+ guys out there.  The others have more shots but less AP so can be used to clear some chaff.  Lastly you can drop a mine to deliver some mortal wound goodness.  While it is not game breaking it will give you some board control options. 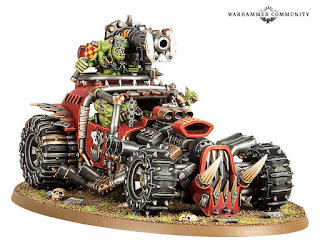 Having four burna exhaust, the Kustom Boosta-blasta, looks to be a mob killer.  The rivet kannon sound ok but with ork shooting it sounds a bit lack luster compared to what we have seen on the other buggies. 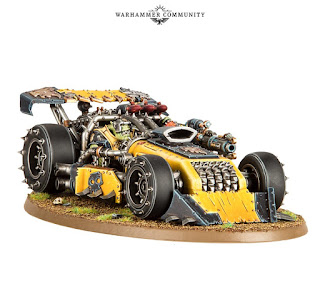 The last of the buggies that they talked about is the Shokkjump Dragsta. This is the new ork sniper.  With a grot gunner and targeting squig you get it down to a 3+ to hit.  With two shots you should at least hit once. It hits with a S8 shot with -3 AP and D6 damage. I feel the orks might have a decent shot and killing some heavier targets maybe not knights but monsters and light vehicles.

In conclusion, I know I will want at least one of each but if push comes to shove  I would take a few Dragstas and Snazzwagons.  I am sad that the dragsta is in the Speed Freeks box set.  This means I will end up probably getting a few sets.  At least this will give me a nice mob of bikerboys.

All these buggies should keep me busy painting well into the new year.  I think I might focus on the orks for a while and see how I can do with my own little WWAAAAAAAAAGGGGGHHHH!!!!