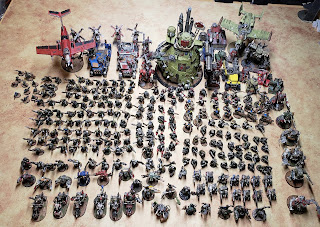 Welcome to the last day of Orktober.  I was hoping to have to codex before this day came but at least I know it is on its way. To celebrate I thought I would show off all my painted orks.  While it is a lot of models I thought I had more… be warned, a lot of pictures incoming.

First up are my flyers.  I Love my custom dakkajet.  I think he might get some use in the coming months.  He is joined by another dakkajet and 6 deff kopta.  I had 12 at one time but six are in the mekshop.  Moving three times really hurt them. 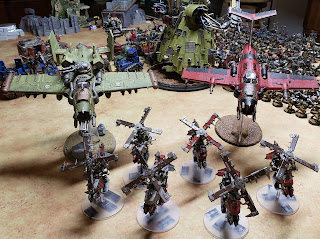 Next up is my motor pool.  This slot will be growing shortly with the two buggies I am currently working on and the other four that will join them.  I plan on reattaching the deff rollas to the battlewagon and I have a third truck that needs painting as well.

After that we have my walkers.The stompa, a mega dread, and my new warboss.  I might just use him as a deff dread since he is so big.  I just couldn’t help it. 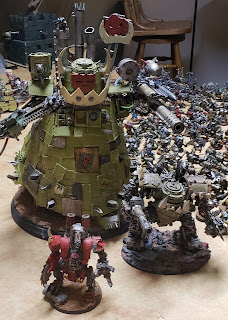 Those were all the ork powered vehicles which leads me to the grot powered ones. Six kans, five tanks, and two mek guns. I have more of each waiting to be painted. There is just something about the little grot vehicles that makes me smile.

Of course you can’t have grot vehicles without grots. 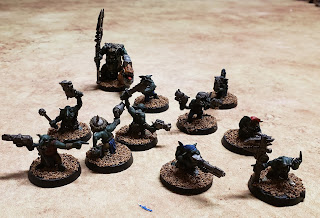 Leaving the vehicles we move onto the ground troops starting with the nobs. I have 13 nobs with varying gear load outs (mostly klaws). I also have seven mega armored nobs. I never used nobs much except in boys squads. With the new stratagems maybe I will try a truck full of them.

I have Snikrot leading 14 komandos. I need to look at his rules to see if he is worth trying out. I love the miniature even though it is metal. 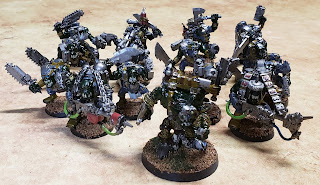 Zagstruck is ready to lead my custom stormboys. I might get another couple boxes of these guys. I loke having a smaller mob of these guys (20 boys) I think 30 of them gets a bit unwieldy. They are a bit too expensive for me. Maybe I will try to make some more with boys and spare rocket packs. 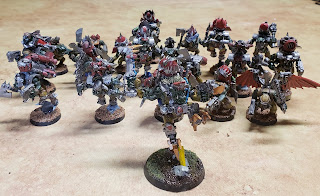 I love the flash gits. They are a cool kit and I have my own converted ones. They are just another thing I am eager to try out in the new codex.

Then we have my tank busta. I do not like the ones GW makes so, like with all my specialist, I made my own. I have not seen the rokkit hammers rules in the new book but I am sure just having the rokkit launchas will be ok.

I have a small collection of bikes that will be getting bigger with the speed freeks box. I have 2 warbikers, 2 nobs, a painboy a warboss, and a bigmek. The big mek was hiding when I took these pictures. Sadly if I want to play a pure codex army the painboy, mek and warboss will have to retire. 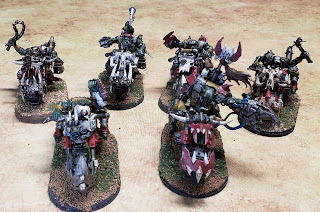 The meat of my army is 88 slugga / choppa boys. I used to have more but I have been cannibalizing them for the other units. I have 3 more to paint to bring me back to three full squads if I ever need that many. The rumor is they will now be based on 32 mm bases. Mine will stay on the original 25mm.

I also have four big shootas painted and a burna. I have seven more big shootas and ten more burnas to paint up. I don’t usually use the upgrades and since burnas are only D3 unlike most other flamers, it might be a while until I field them.

My other set of boys is a bit smaller. I only have 38 shoota boys. This was so I could field 19 and a nob in a battle wagon. This was before my flash gits kicked them out.

Last but not least we have the individual models. First up we have all my leaders. Gazkull leads them with three big meks which only one made into the codex. There is one weirdboy that I love. It is so much better than the official one. The last two models are warbosses. One old metal one and the black reach warboss.

To completely finish my army we have the single elites. I have two painboys one official model, on custom one. And the final model is the nob with WAAAAAAAGH!! Banner. 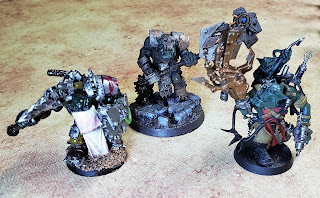 This come to a total almost 300 infantry models, several vehicles, and one super heavy. I don’t see my Waaaaaagh! Slowing down. I still quite a list to paint / fix still (75 at last count) and I know I want more units like the new buggies, a morkanaut and the newer plane. Maybe I should figure out how many points all this is…