Kitty came out to play! 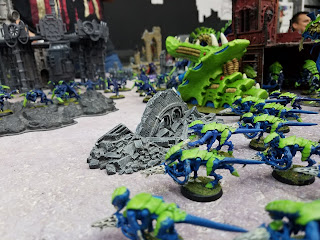 Last week I brought back the bugs to duke it out at the Thursday night league night.  One of the workers was disappointed when I brought my orks last time so to make him happy, my tyranids got to come back for more biomass.

I thought I would change it up a bit this time.  I brought out the tervigon for some spawning fun.  I added crushing claws to him but saw that this was a mistake since he is not great to begin with in close combat.  Swinging to hit on 5s is just not fun.  On the flip side she did well replenishing the little guys.  One mama and some babies might just become a staple of any of my tyranid lists. 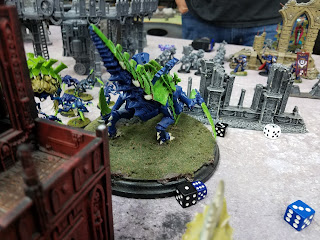 Another almost must have is two exocrines. They just do so much work.  They sit in the center of my deployment zone and just fire away.  Squads of marines just disappear.  With them I also like to take a manalthrope babysitter. This makes them harder to hit. If I can find some cover for them, or add some catalyst to them, they could be tough to move.  At 12 wounds apiece, it will take 2 really lucky lascannon shots to take them out otherwise 3-4 would be more like it. 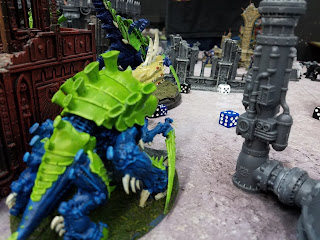 When making this list, I wanted to have some fun.  Since the shop allows lords of war, I decided Kitty would join the fun.  My scythed hierodule never got to see much action in 7th edition.  While he has 22 wounds, focusing fire on him will make him disappear pretty quickly.  With his total being over 400 points I doubt I will take him often but when I want to have fun he can come out to play. 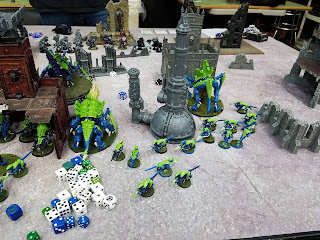 I played against an ultramarine army.  He had a bunch of character, two assault squads, two veteran squads (I think they are the elite jump guys), two tactical squads, one set of the new jump guys, the new plasma guys, and a scout squad to round it out. 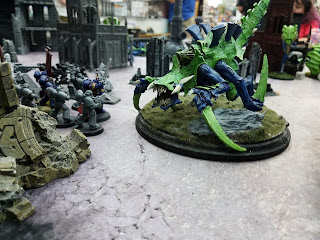 I think if we just had a normal mission the outcome would have been different but since we were doing the Konor mission he had to keep advancing or else die.  In the end I took out all of the troops and was starting to pick off his characters. 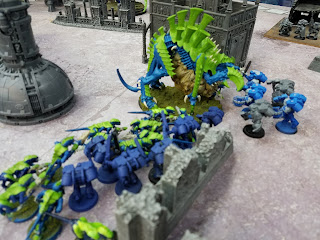 I need to stop spreading out my genestealers.  They take up more room but when I charge most of the unit is left in the dust.  I am to set in the old blast template days.  I don’t have to worry about a blast taking out a bunch of guys anymore.  If they bunch up then maybe more than a few can reach the lines.

Another thing I need to do is figure out which combat to interrupt.  I got greedy and had my genestealers go out of turn but realized that my gaunts would have done a lot better if they went before the assault marines.  Live and learn.  It is a new mechanic that I will get better with in time.

The Tyranids did pull out a victory.  I was a bit worried with this one but it all went smoothly in the end.  I still am not looking forward to facing a tau list or a knight list.  My streak is still going strong.  I am knocking hard on wood to keep it alive.

This week I am introducing 40k to a friend so maybe I will have a new opponent soon.