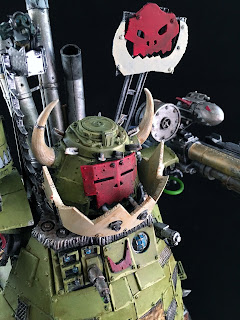 With work and school, I have had little time to do anything hobby related except for play in a great Apoc game and finish up my Stompa, George. 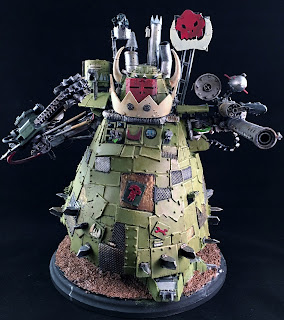 I bought George many years ago from someone leaving the hobby for $25.  It was a dream come true.  Over the next few years I assembled him, put him on a base, then painted him.  All that was left were some touch-ups and finishing his base. 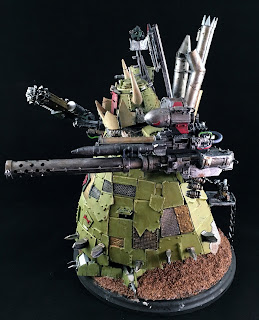 I went with my usual celluclay with ballast on top.  This is better than just a flat surface but it is not the coolest base ever.  I should have added a few rocks or spare bits but I was in a hurry, so I went the easy route.  I am not sure the lazy hobbyist would have let me spend more time on the base or the scared hobbyist in me would let me try something braver in fear of messing it up, so I did what I was comfortable with. Overall, it is just basing and is not supposed to be elaborate.  Simple is good.  This way you pay more attention to George. 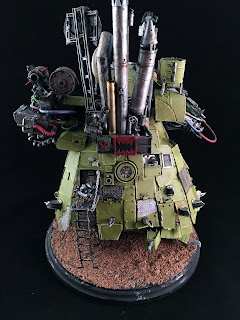 It is a wonderful model.  It went together easily and it towers over all my other models except for the knight. I finally got to use him in the Apoc game and for a super heavy he is not that over powered.  On turn one, he ran out of bullets and shot all his rockets.  So the rest of the time he was shooting the S10 AP1 massive blast.  While this is impressive,  when others are shooting D blasts all over the place it felt a bit underpowered. 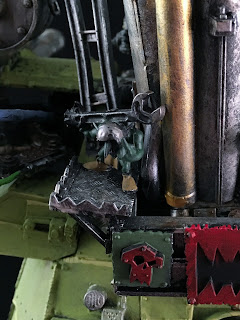 He survived the whole game.  They took a couple of hull points off him but my meks just healed him up. Next time I think I will try to get him into the battle and start chopping stuff up.  It would definitely be more fun! 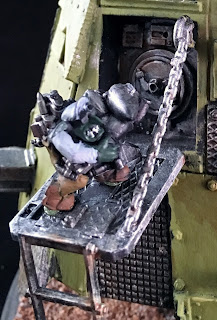 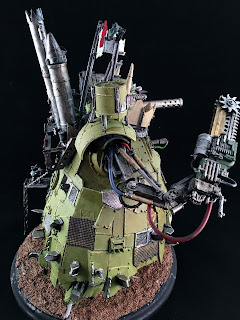 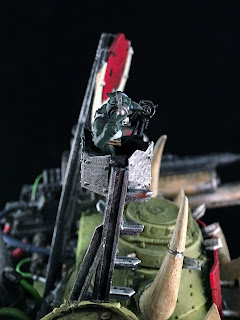 I hope you like the pictures. Next up are my new trucks then back to the genestealer cult.  I will also be adding Belisarius Cawl to my Ad Mech army so look for him early February.