Shorehammer! A cool con on the ocean! 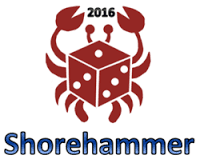 This weekend was the Shorehammer debut.  It sported a 40k highlander tournament, a Age of Sigmar big battle, and a no holds barred tournament they call The Nut Crusher.  There were a few other games and plenty of open tables.  The atmosphere was light and everyone seemed to be having fun.  I am not sure how successful it was but I think it was a great time.
They had three mini games that I wanted to try out but couldn't quite fit them in.  The first up was the Gorka Morka Drag race.  I am not sure of the exact rules but they seem very similar to the rules Mini Wargaming had during their campaign with a few mods.  If I remember right they used a modified Gorka Morka rules set for their games as well.  It looked fun.  I got to see a game in between the turns of my tournament. 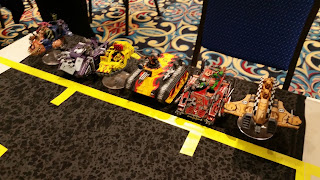 The next up was the Hive City.  I didn't see anyone playing this.  The board looks cool I would have like to play or at least seen some people playing this. 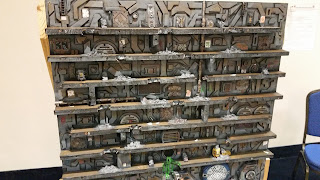 Lastly, was the Wych Cult Death Matches.  I didn't see anyone playing this.  It sounded fun.  Kinda like the "Who Would Win" type games out there but in a 10 player tournament. 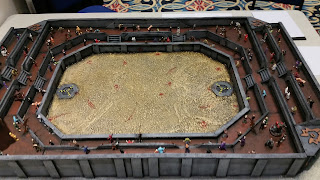 I would have liked a little more enthusiasm. for these games.  Maybe have some one announce on the loud speaker when the next match was starting.  Also have people man all of these games so you could have one running at all times or if they get popular then one person for each.  I understand this was the first convention, it just felt that an oppertunity was missed here.

They had a lot of open boards to play on. I didn't take advantage of any of the boards unfortunately.  It is nice to have them available for everyone to play on.

The next few shots are from the highlander.  The first is my friend's Sisters army.  It was funny how many surprised comments he got. 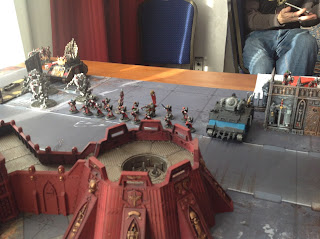 The tournament was fun.  Almost every one had time to finish their games.  It is a smaller point game and limiting on shenanigans with no flyers or crazy summoning. It was also a strict 4 turn game which caught me off guard a few times.  I just need to play the objectives.  I am sounding like a broken record. 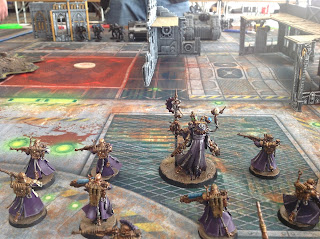 The boards were pretty symmetrical. There was a large piece in the center with another large piece in each corner.  I think the long range game hurt me in my games since my opponet had plenty of terrain to hide behind and not a lot of room to maneuver.  Next time I might bring one of my assaulty armies like nids or orks.  I am not sure gretchen will be able to help out much. 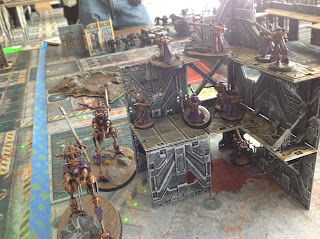 I would suggest a 5 turn game next time with a 15 min deployment.  There seemed to be a lag inbetween rounds.  Other than that it was great! 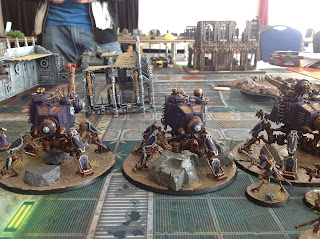 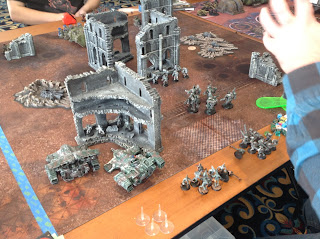 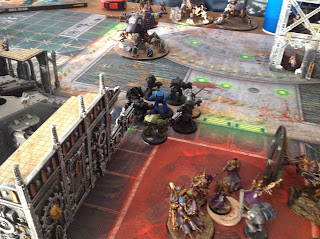 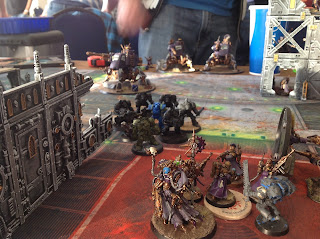 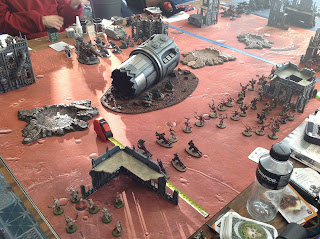 Thanks to Pimpcron and team for all their hard work.  I had more fun here that I did at the Nova.  The games were cool, the people were friendly, the RPG guy's panel was interesting, and I can't wait till the next year.
Posted by Grenn Dal at 2:27 PM