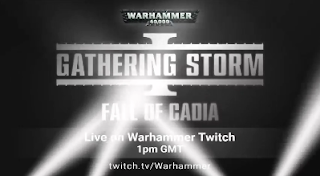 The boys over on the Warhammer twitch channel have brought us a sneak peak from the new book called Gathering Storm: The Fall of Cadia.  They have shown us three new models that will be featured in the book. Here are some screenshots of these models.


First up is Inquisitor Greyfax.   They said she was a witch hunter as well as a psyker.  The hinted that she will fit nicely into and imperium army.  This might be nice to fit into my IG army or possibly my ad mech. 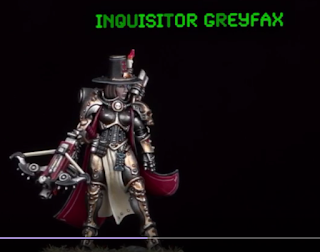 Although, if I am going to add a model to my ad mech army, it will probably add Belisarius Cawl. 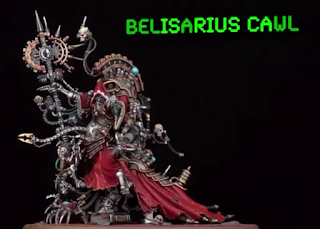 Belisarius Cawl is an arch magos.  They flashed his stat page but I couldn't get any info from it other than he is an HQ.  They did say he is toughness 6 and has 5 wounds.  I am eager to find out where he fits in.  Will he be for cult mechanicus alone or will he finally be the skitarii first hq.  I am eager to find out. The also said he was as big as a carnifex.

Last but not least is The Living Saint Celestine. 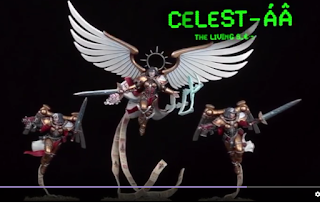 In the imperial agents book we saw a sisters army without the saint.  Now, we see she is back in this book. I am unsure if they mean for you to use the two new books instead of the old digital codex.  I am not familiar enough with their rules to see the difference.  I am told that the acts of faith are a bit different but mostly it is the same.  I would like someone take an in-depth look at the differences.

With the kickstarter of alternate models almost here, I had a feeling that it was time for GW to release a plastic sister models.  If you are to believe Raging heroes, I should be seeing them in January.  This probably means March knowing how slow they really are.  Here is their Celestine. 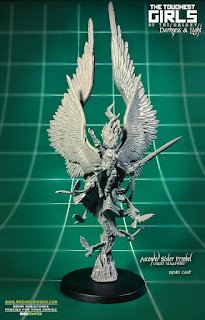 While I like the new GW one, I think the Raging Heroes one is cooler.  It also looks more stable and for that I am grateful. With my small force of 30 alternate girls I doubt I will buy any of the GW sisters.  I might buy some bits to fill out the weapons but they were too late for me to buy a whole force.
There you have it.  They talked a lot about how 2017 was going to be huge for 40k.  This book is the start of a huge chaos invasion so I have a feeling that there be a lot of non xenos army updates.  If this is true, I can focus on my cult army.  I just feel sorry for my poor orks and tyranids who seem to be falling further and further behind in power.  I guess I just have to find new and tricky ways to play them I guess.