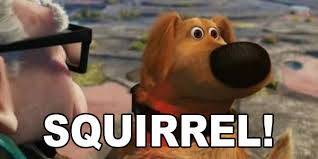 OOPS. I didn't mean to publish this with just pictures but mistakes happen.  So this week I have been a hobby butterfly.  I never settled on any one project for too long. Here are some of the things I have been working on. 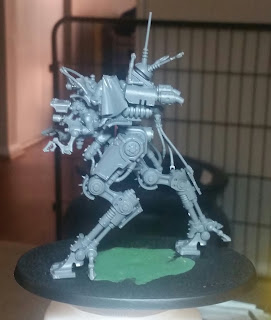 I assembled the ironstrider to a point.  I wanted to be able to use it as a Dragoon and a ballistarii.  To do this I molded the drivers torso and added a new backpack and now it is ready to be painted. 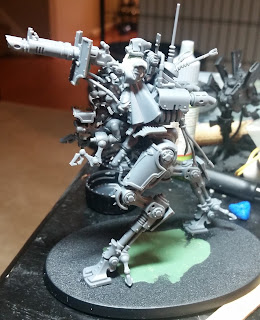 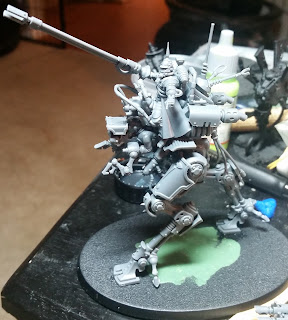 I am still not that great at copying bits but when it is something hidden pretty well it seams to turn out ok.  I used the torso on the Ballistarii since his arms and guns cover up most of the details. 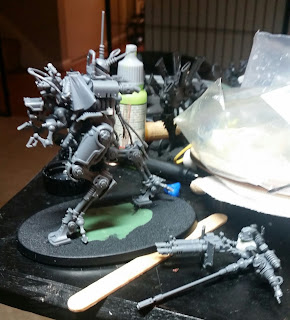 Last is a shot of the dragoon driver all primed up.  I should have some paint on him by Monday.

Next up I have Illuminor Szeras.  I think the model looks cool.  I think the pose could have been better but what are you going to do.  I got hime assembled, primed, and got the first layer on him. 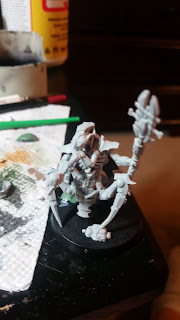 while working on him I also based up some lychguard and I started to paint them up as well. 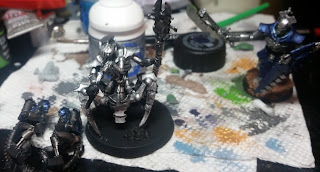 Some of the lychguard are just getting an update using the new colors.  I still need to figure out the best way tp highlight the blue.  I think I will be finally be mixing colors.  If this is the case I need a wet pallet and to get the most out of my paint. 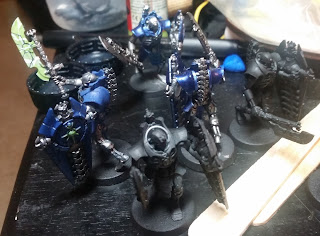 Lastly I was also working on my  ghost ark.  I have painted up the 9 passengers (not the one glued in).  I have to highlight them still.  I am debating painting their eyes to show they are deactivated. This is just probably me being lazy and not wanting to do the fine details.

So there you have it.  I touch each of the projects a few times this week and worked on all three last night.  It is nice to see several things getting done at once but I think that maybe I should see one done before I move the the next one.