Yes, I am alive! I have been a bit busy with work school and vacation that I have not had much to post about but this weekend was Forgeworld Open Day and the guys/girls over at BattleBunnies have some pictures from it.  There is a lot of Marines to look at but we all know that I am interested in the Ad Mech stuff.

First up we have a  Macrocarid Explorator. 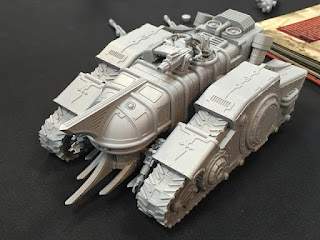 This guy looks like a cross between a Scicarian and a Triaros. From what I can tell it is a AV 14 transport that can take sponsoons and a few other hull mounted guns.  It would be nice to have some transport for my admech but alas this is for 30k.

Next up is the Vultarax Startos Automata 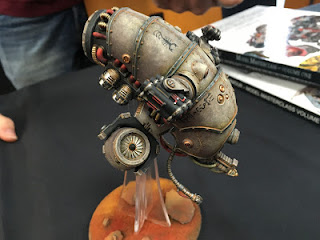 Again this is for 30k and it looks to be the precursor to the blight drone.  I like this version better and I would love to have this for a flyer in my ad mech army.  Looks like a couple of havoc launchers and a nose gun of some sort.

Last up are the Secutarii. 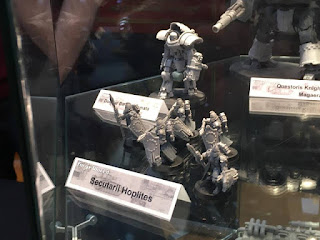 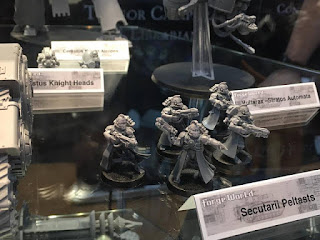 From what I have read they are from the Adeptus Titanicus.  There are still titans in 40K so they might get 40k rules. If so, I will be able to add them to my Ad Mech army.  I would hate to get them then find out they are 30k only as well and have them just sit on the shelf. 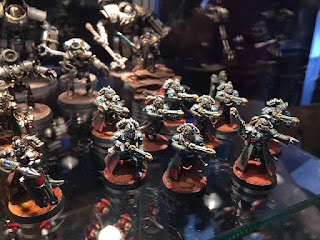 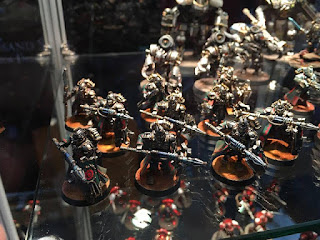 I love the look of the Hoplites.  I would love tho know what the rules for those lances are.  they are like little Lance Knights. The Peltasts gun doesn't look like any gun I know of so I am eager to know what that is as well.

Hopefully since these are in the case and painted we will be seeing them soon.  I have heard that Forgeworld is going to be at Nova open.  If so it might be cool to get a day pass to try and snag a couple of these sets.

I really love the Cybernetica Cohort from the 30k universe.  I just can't see me starting one.  There is enough 40k kits that I am plan on getting.  I just added the whole Ad Mech line and I have a sisters of battle ariving soon.  I think I would have to sell off one of my other armies if I wanted to start them up.  I just don't want to do that. Also, I just don't know anyone who plays 30k.  I know it is similar to 40k but the armies just don't match up very well.  This is a topic for another time.

Coming up this week I have pictures from this weeks big Apoc game.  My poor Knight!!!
After that a showcase of my finished manticore and some new wip. Until then...