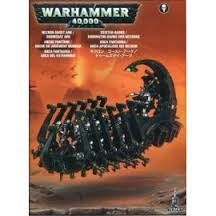 As our campaign wraps up and another one begins, I think it is time to let the hive rest and bring out a few of my lesser used armies. I have decided to bring out my Necrons first.
Most of of my painted models were painted before the 2011 codex came out.  After that codex came out I painted up some of the newer units primed others and left the rest grey.  One of the primed ones were my ghost arks.

After looking at my Necrons,  I found that my ghost ark needed the most work to get to a playable standard. That green is horrible and I am not sure what I was thinking when I did it.  After I finish painting it, I plan on updating the rest of the army by switching out the flat blue they currently have with the new metallic blue I used on my lychguard test models.

Before I can update the ghost ark's paint job, I need to finish building it.

I assembled the barge empty but never bothered to build the passengers. The plan was to paint them s before I glued them into the ark.  It will be easier to paint the detail on both on passengers and the ark without them in the way.  I ended up gluing one guy in just to make sure I could and to see how cramped it would be.
I spent the night building most of the passengers before heading to bead. I have 2 more to assemble then I can prime them and paint them.  I plan on using the scheme from my warriors with the blue body.

I used to have a few different styles but I think I will just stick with one style and I think this looks pretty cool. I will then update a squad of warriors with the new color. After that I can move onto my other squads. I think I have come a long way from these guys. Ok maybe not that far...

Next up I had to add the driver.  I had thought of putting a crystal there driving it but the more I though about it the mor I wanted to use the driver.  I built him up and glued him in. 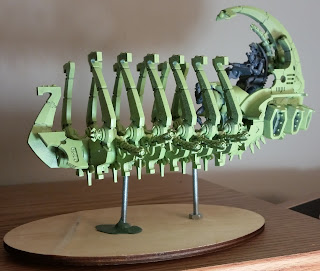 I really didn't care for the little stand that they used so I beefed up the base and used a couple of bolts to hold him up.  These will be black after I prime him up.  I will probably just leave it at that.  It might be a little tall but I am okay with that.  Just so that it doesn't break off. 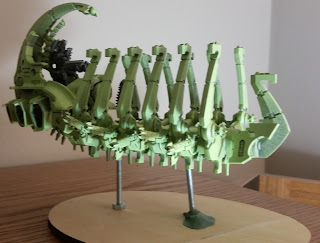 I plan on building up the base maybe using some foam rocks like the dunecrawler.  Most of my Necron bases are plain with some ballast for ground cover.  I think I will use some cellu-clay to give it texture add some rocks and call it done. Just need to keep it simple.

Hopefully I will have some more time to work on this guy.  I would like to start painting this weekend .  I am going to cover the green with black since I remember it being a pain to paint on.

Coming up next will be a recap from our 16k per side apoc game then some pictures of my finished manticore.