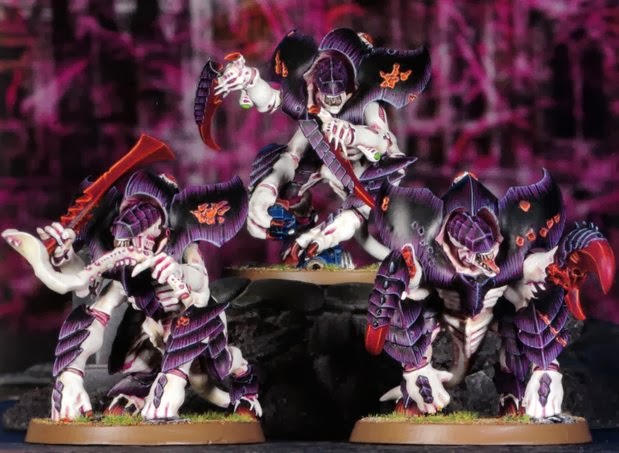 Just looking at these shows us some new options for the tyrant guard.  there is the bonesword lash whip combo which, as I read the codex, was not playable before it was one or the other and some crushing claws.  I am eager for what the rules on these will be.  Hopefully they will become AP2.  If they just give D3 extra attacks I am not sure I would take them.


I am liking this kit though. I am tempted to get a box to make 3 new weapon hive guard and then use the CC on my old guard that I was working on.  I had not yet figure out how to fix the plate over the arms so now I will have that and plastic weapons to boot.

Another leaked photo is a page from the codex. 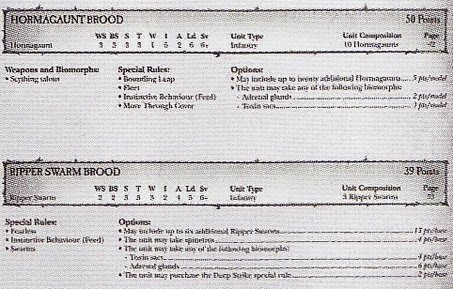 It is all blurry and low rez. Not much different from the original.  there is speculation on the toxin sacs on the hormagaunts being 1 or 3 pts.  3 points just puts them back to their orginal price so no big loss the 1 point would be a great reduction in price.

The rumors say that bounding leap is just +3 to the run move.  It would be nice if that was +3 to run or assault but again I won't hold my breath.

The big thing that my bugs need is a way to get into assault quicker.  We have so many assault oriented units that just die before they can ever swing a claw.  We used to have cover and assaulting after a run but 6th has given us a plethora of "ignores cover", overwatch, and the run or assault.

I guess I am whining.  I have played bugs all this year and even though I have not played as many games in the past I still have played a few and I am over 50% win.  Not bad for what some call a weak codex.

I am still excited about the new codex.  I was excited for the one we have now.  If it is not OP and it is "balanced"  then the only thing I have to worry about is how long until the bandwagoner hold on.  The sooner they hop off the sooner I will be seen as a true bug player.