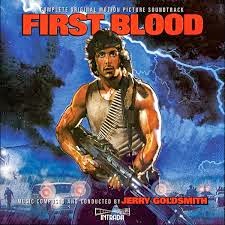 Saturday I had my first game in Ohio.  I went to Epic Loot Games for a pickup game or to join in a league that they run on Saturdays.  Unfortunately there was a convention with a 40k Tourney in Cincinnati so the attendance was low.  There was a big group of Xwing players there playing in a monthly tournament but no 40k players.


I waited around admiring the terrain and just when I was going to head home Alex showed up.  He had been playing in the league. It was an escalation league and he was building up a Chaos Space Marine(CSM)/Daemon army.  here is what I remember from his list:

my list can be found here. I had forgotten my drop pods so I had the doom walk on (Lucky guy) along with my guants.  We rolled for mission and got purge the aliens and dawn of war deployment. 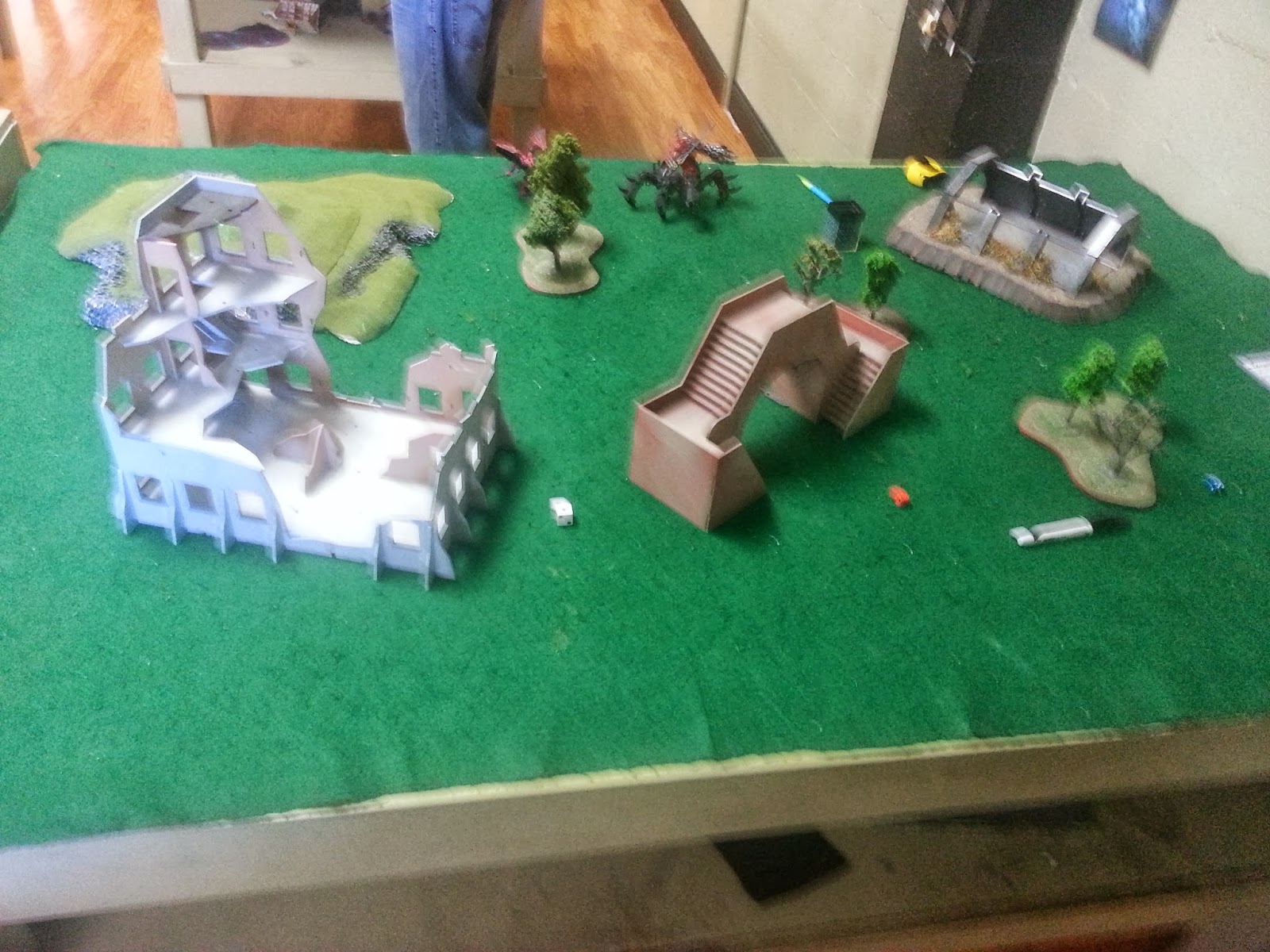 He setup first and spread out his army across the board leaving the heavy hitting vehicles in the center of the board.  I also strung out to avoid the pie plates of doom hoping to  grab some cover . 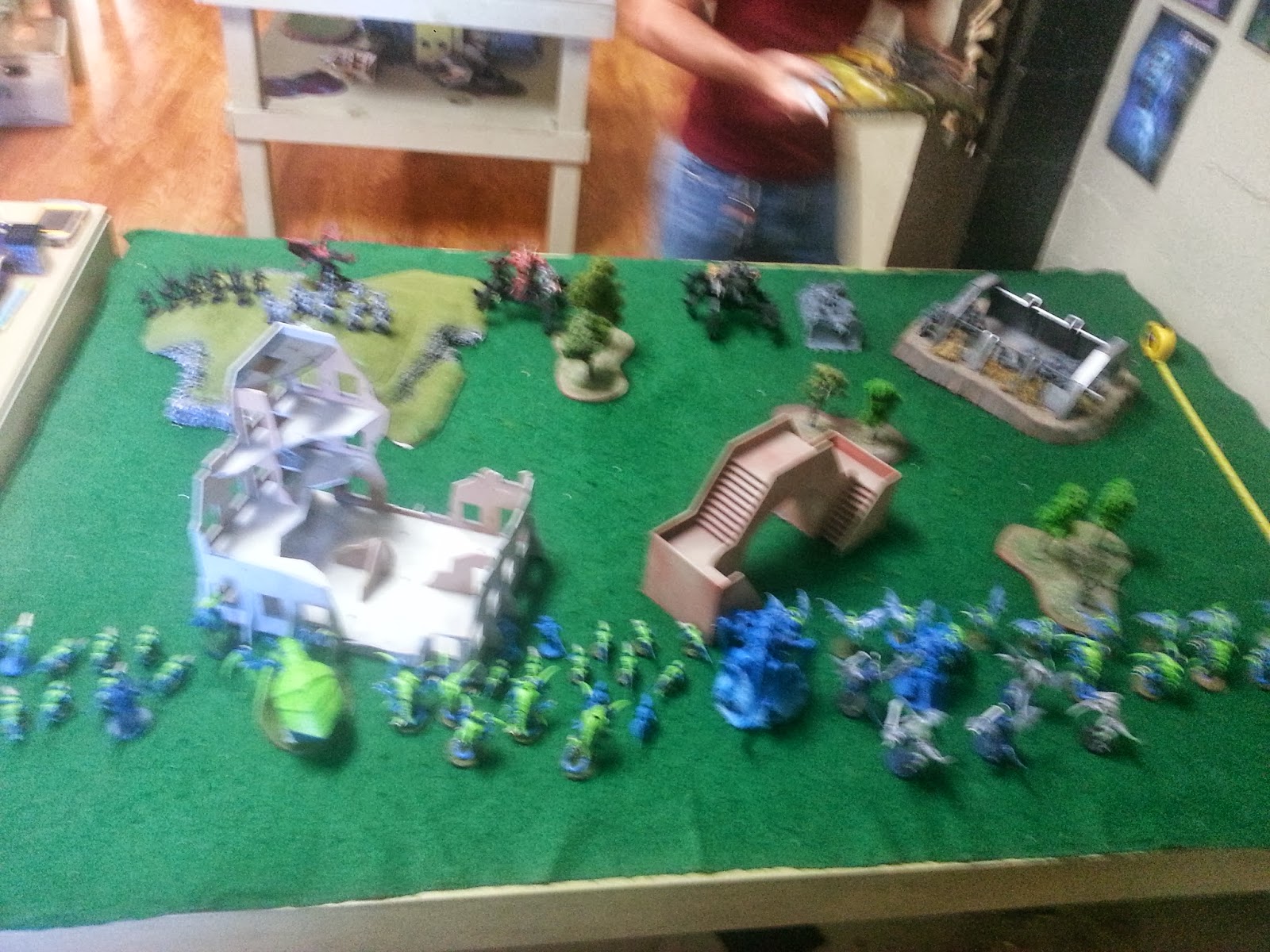 He then infiltrated 3 units.  He placed his terminators way on the outside.  I think this was a mistake since my army is pretty quick and just avoid that deathstar if need be.  If he would have either deep struck or infiltrated them in the center of the board I think they would have done more. 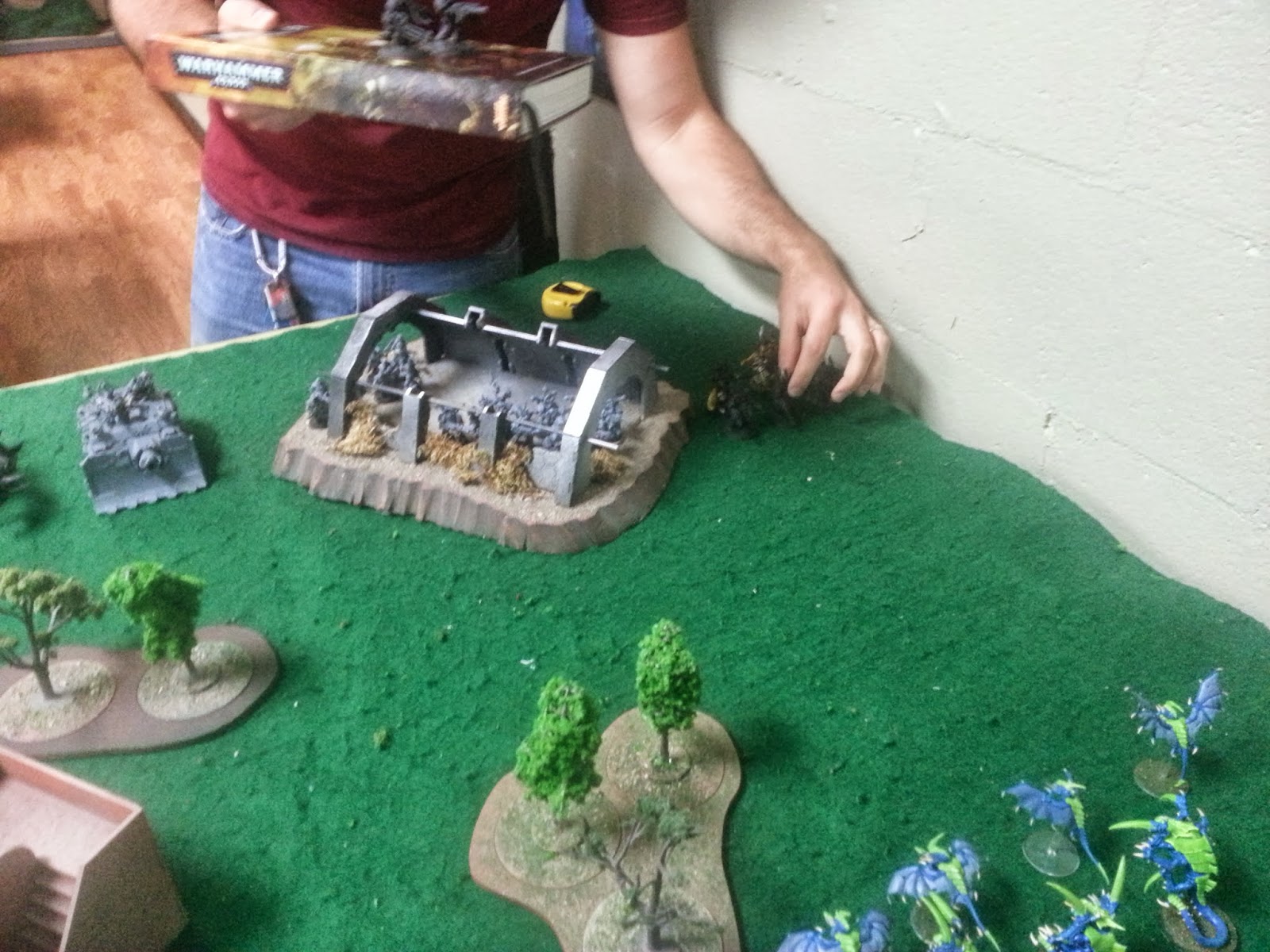 Turn 1
Chaos:  Moved up a bit shot and killed a couple guants, 2 raveners (one from each squad) took of 3 wounds to the custom Tervigon and killed a bunch of gargoyles.

Bugs: everything moved up. swarmlord puppetmastered the defiler but was denied. the Big squad of guants  shot and killed the blood letters (first blood) the tervigon shot the prince and knocked him out of the sky but no wounds. 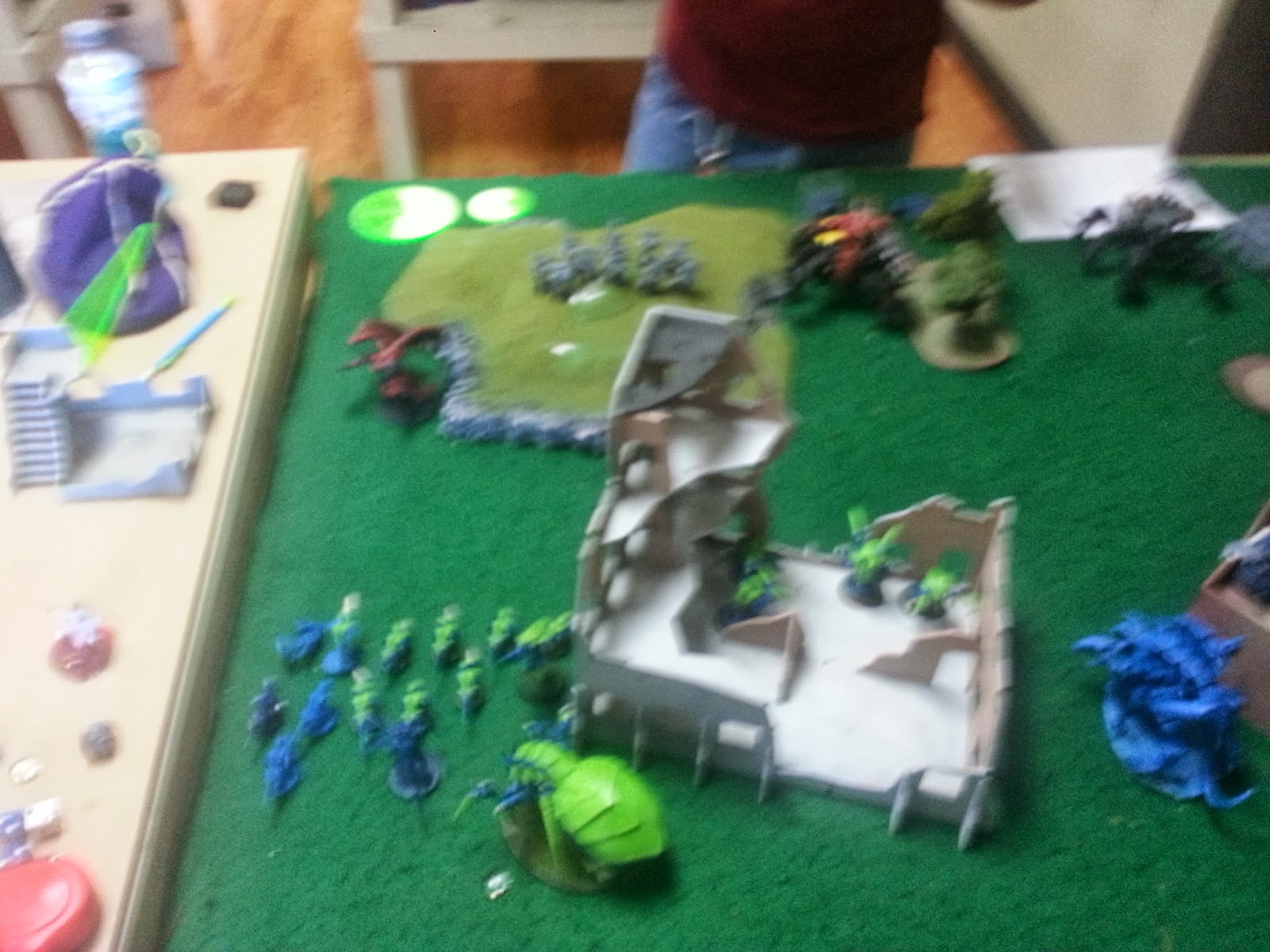 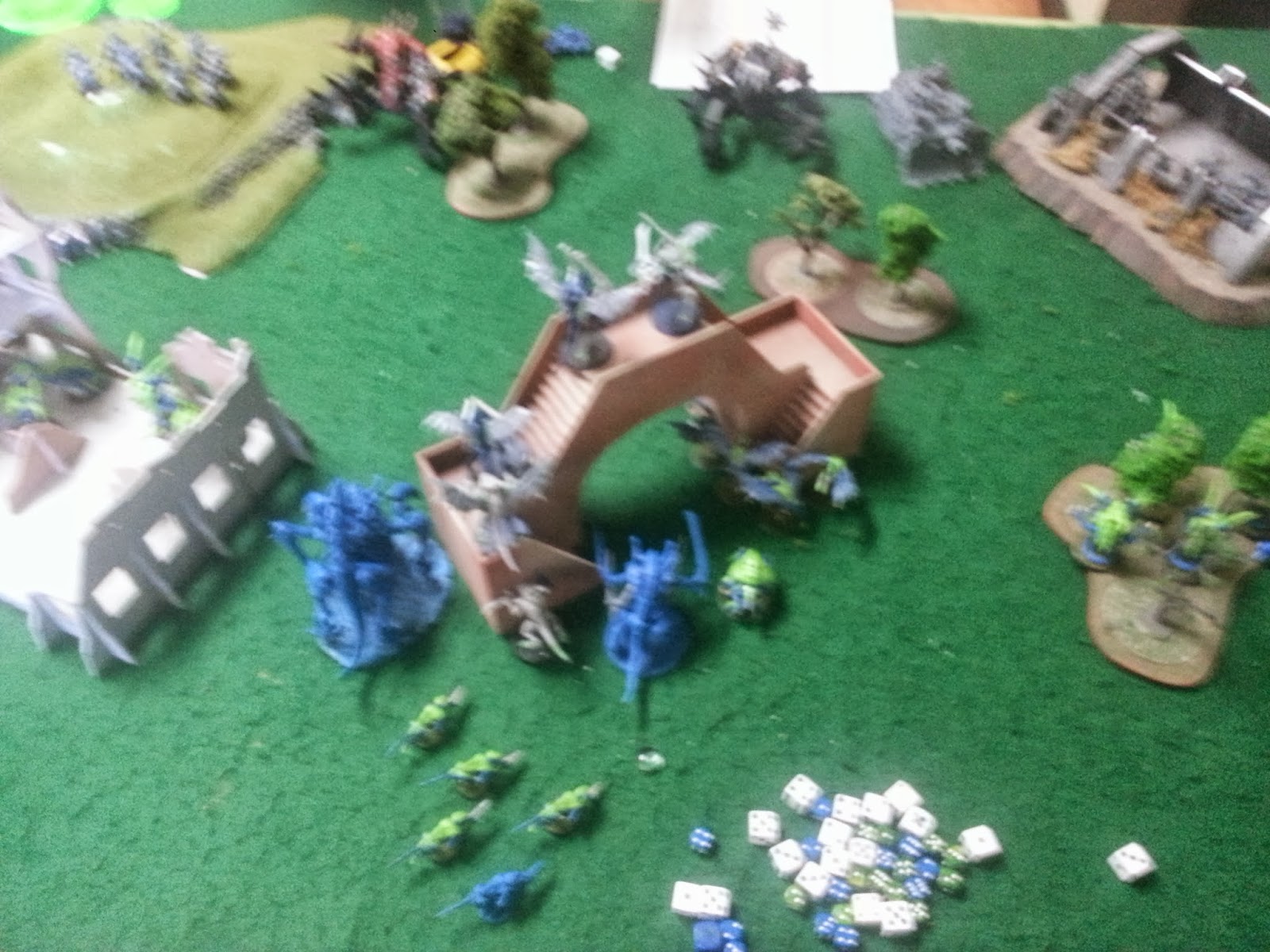 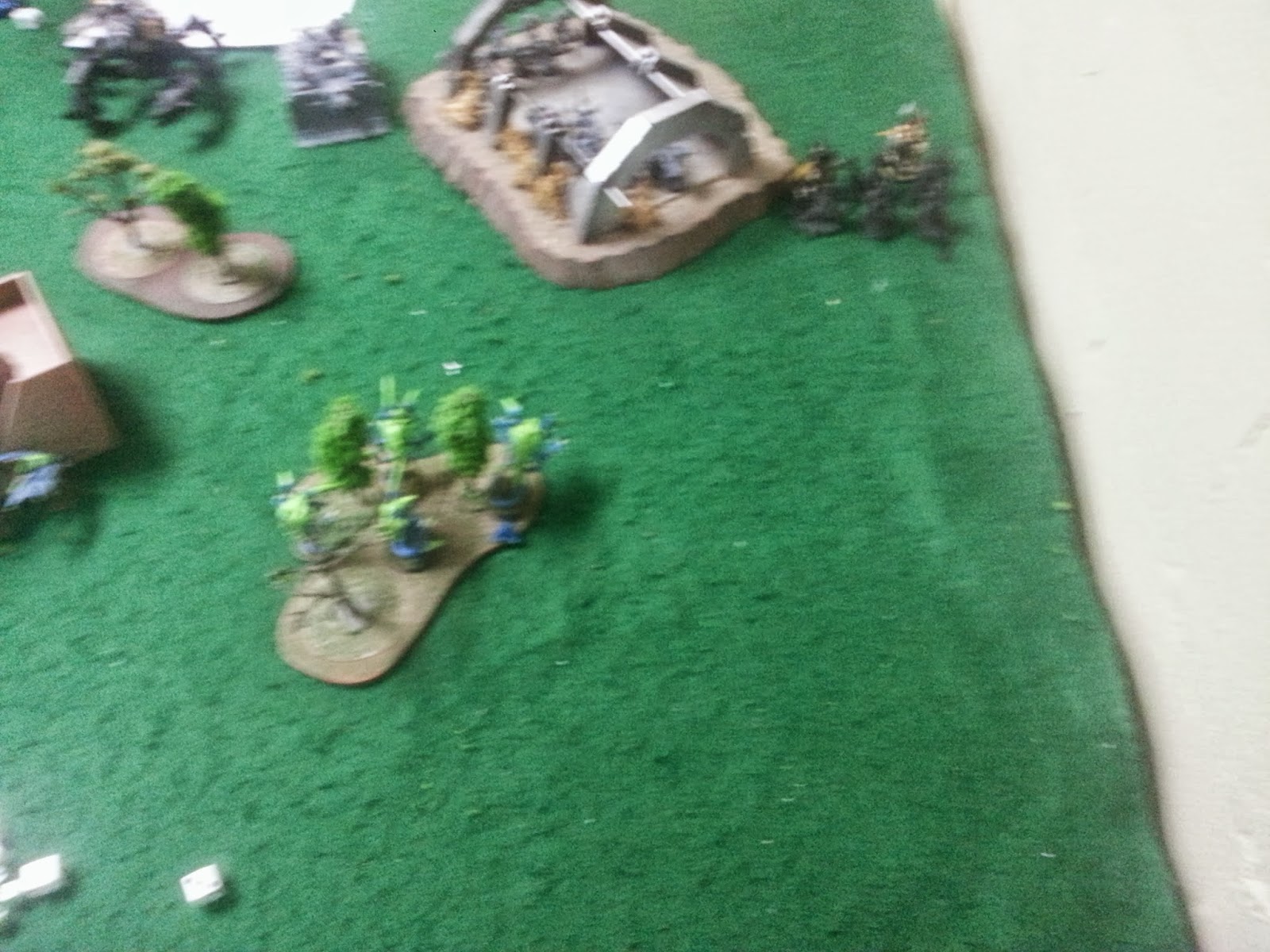 Turn 2
Chaos: Again he moved up.  He brought his prince up 7" away from the doom and then opened fire.  He killed 1 ravener from the left side and 3 from the right. His defiler and vindicator both missed. He then assaulted the doom and decapitated him.

Bugs: the tervigon and guants shot at the prince taking 4 wounds off him.  (he had 5 thanks to a gift) the swarm lord took tried to take control of the defiler and failed his test the raveners moved up on the grinder thinking they might be able to hut him but after running the numbers it did not look good.  my lone ravener got ready to assault the cultist and the shrikes got ready to swarm the vindicator. The guants and tervigon took out the prince and the shrikes only got 2 hull points off the vind. oh no! 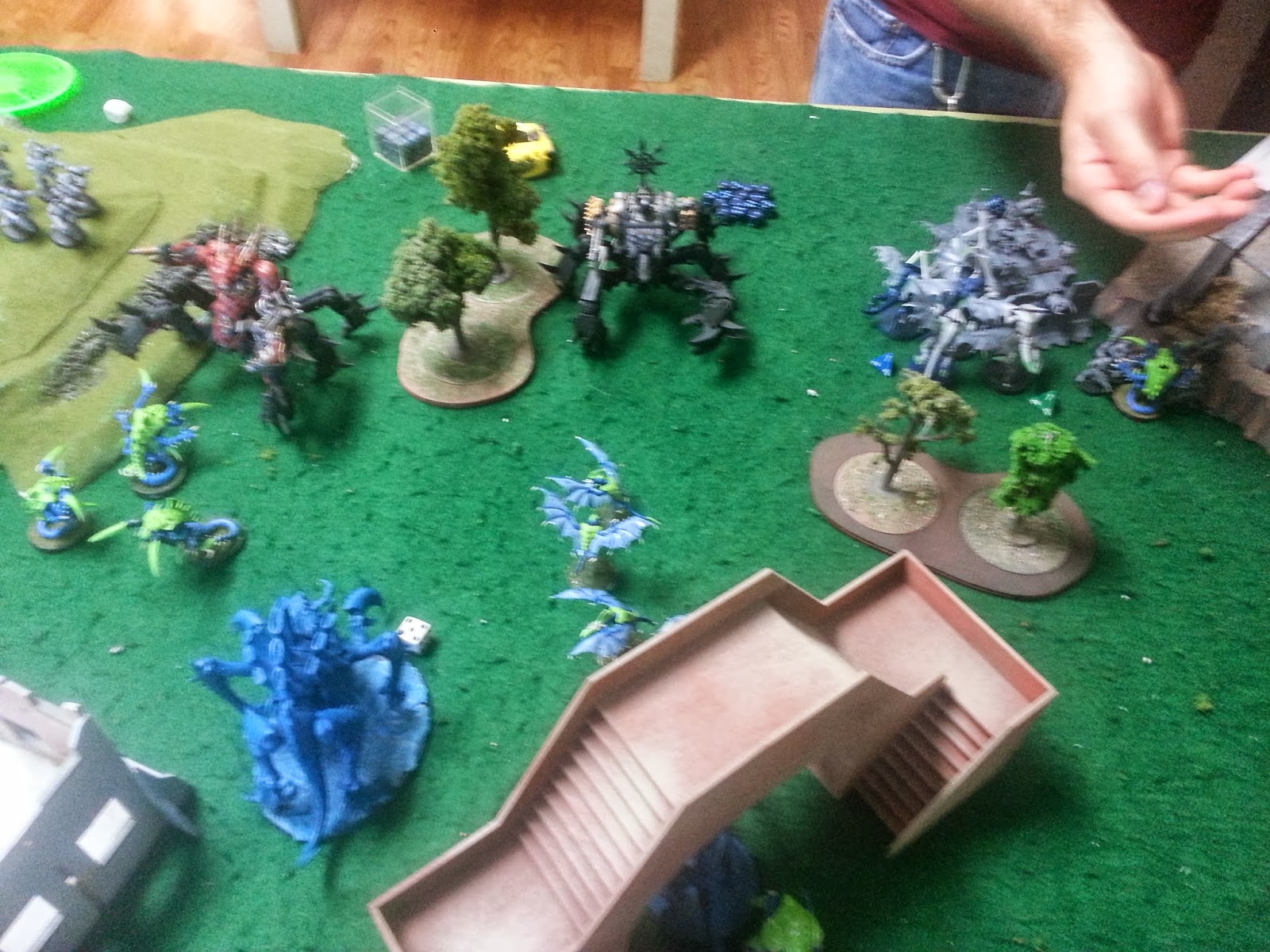 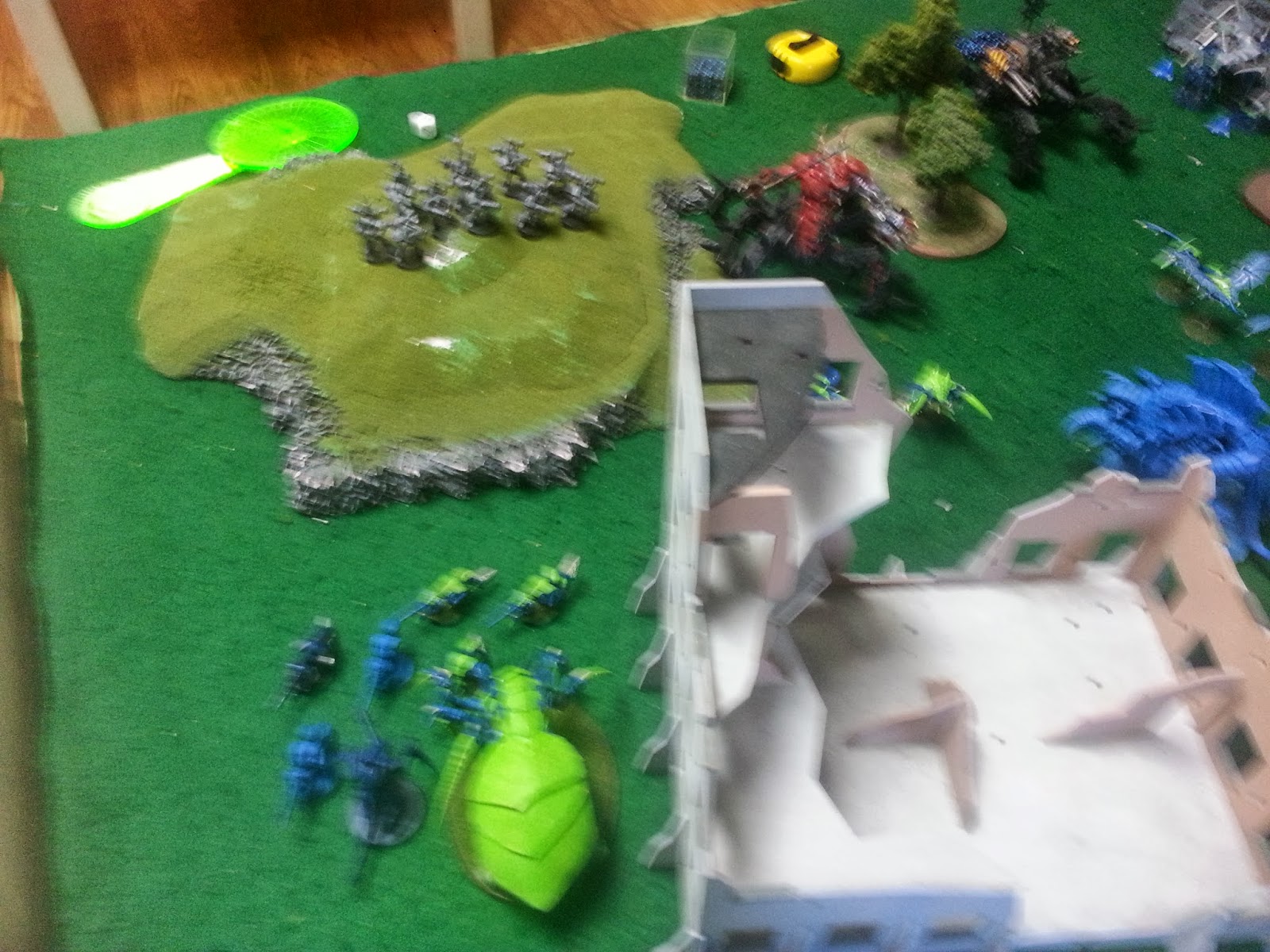 Turn 3
Chaos: He put more wounds on the tervigons leaving both down to 2 left. His soulgrinder mopped up the ravengers.  His Helldrake cam on and did a vector strike on the shrikes killing one.  then the vindicator landed a pie plate on the remaining killing 3 more allowing his marines to gun down the rest.  He then killed the remaining guants and putting a wound on the prime. Luckily he failed to wound with the lascannon.

Bugs: The swarmlord cast warp speed and took control of the vindicator and shot at the marines on the hill who passed a bunch of cover saves.  The gargoyles tried to shoot down the helldrake but failed both tervigons assaulted the grinder and blew him up and the swarmlord took out the defiler. The ravener continued to slapfest with the cultist.  How sad. 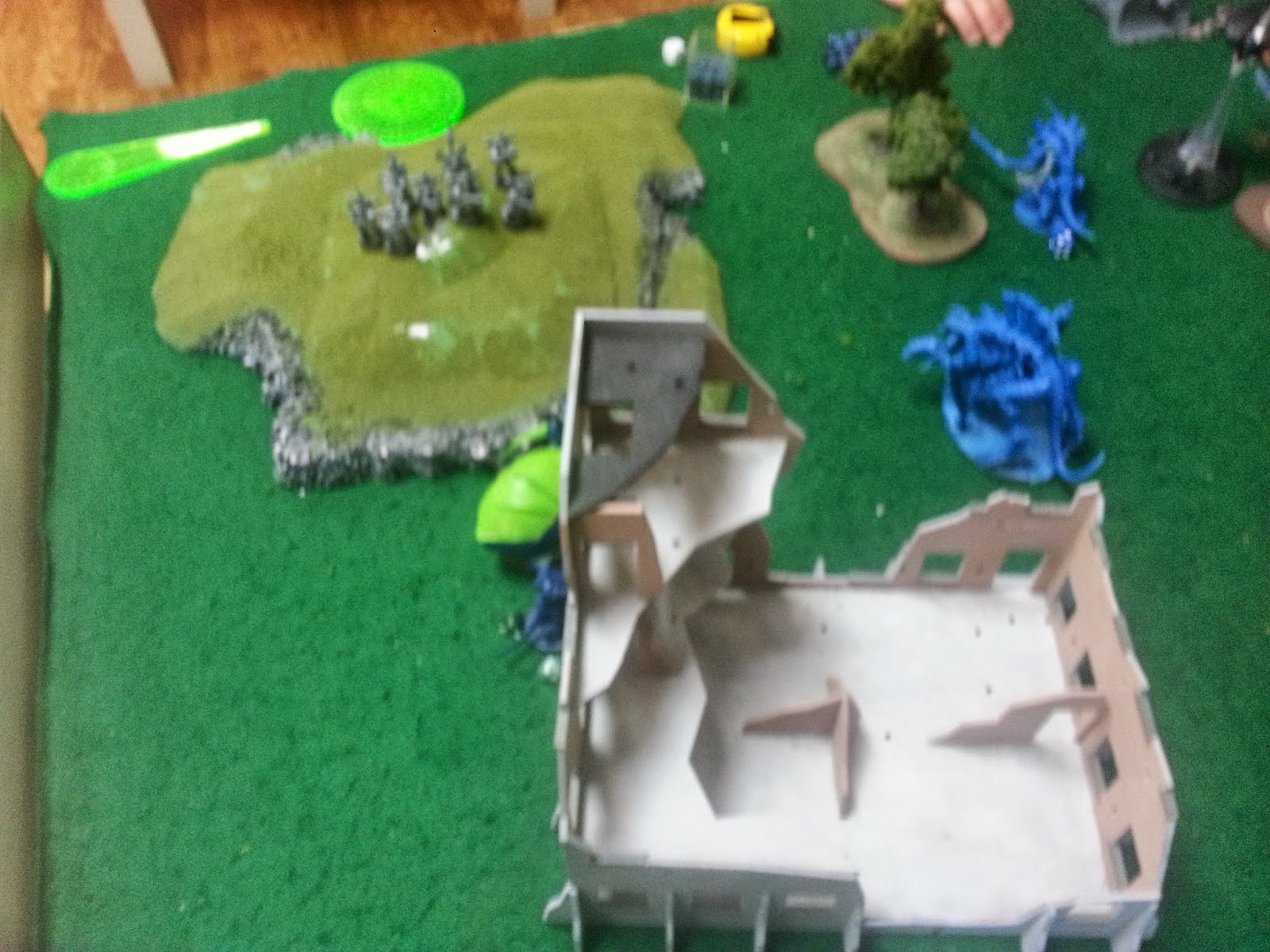 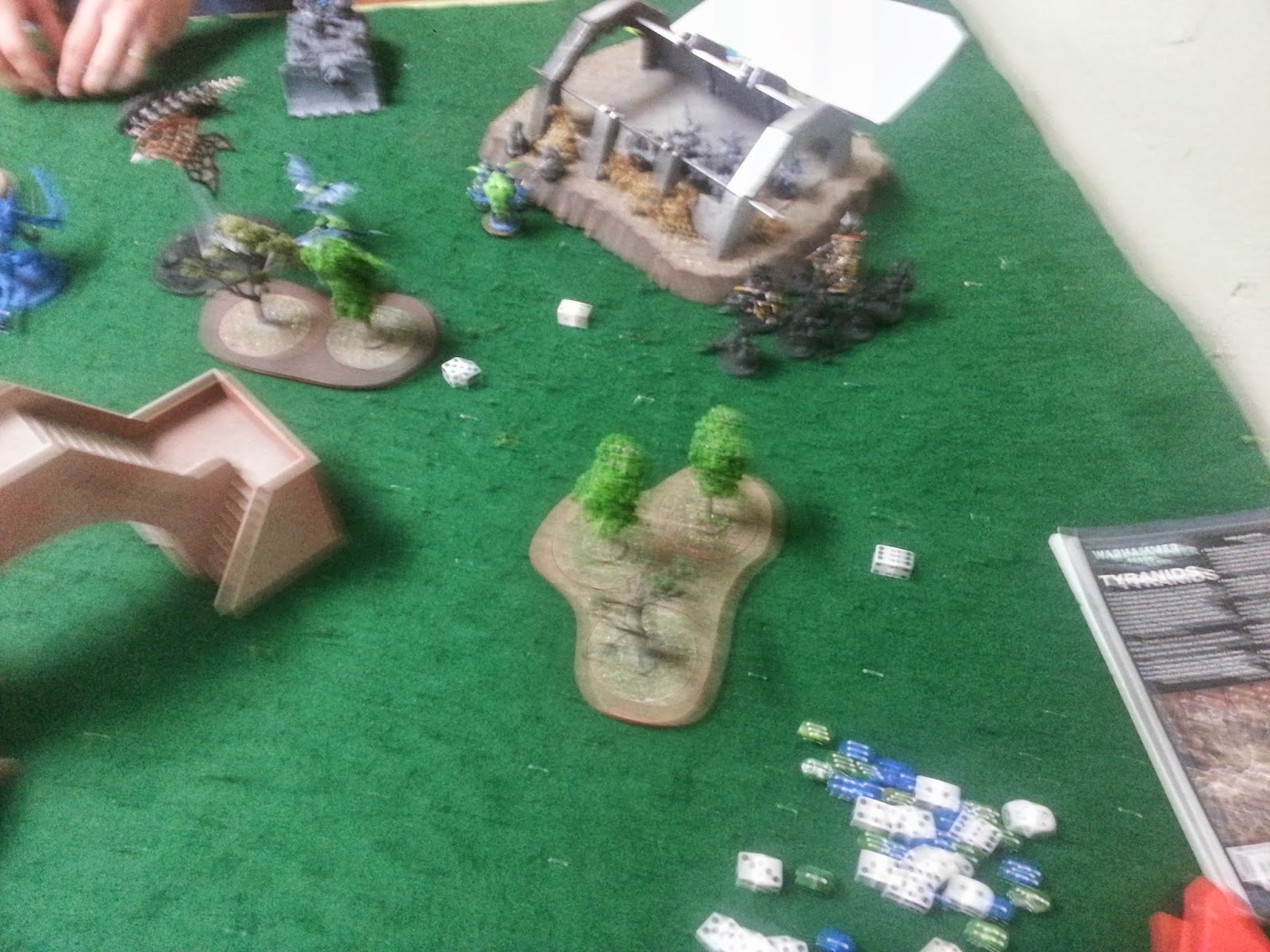 Chaos:  The drake hit the swarm lord and did a wound. the marines on the right took out the gargoyles and the terminators moved up.  The marines on the hill tried to bring down the beasts but failed. The Cultist killed off the ravener.... Heroic Cultist!

Bugs: The swarmlord tried to leach life from the cultist but perils and then charged. while the tervigons teamed up and attacked the CSM. One killed the Sargent and the other one wiffed. while they couldn't scratch my big bugs.  The swarmlord slammed and only killed 1 cultist and the stayed locked in combat. 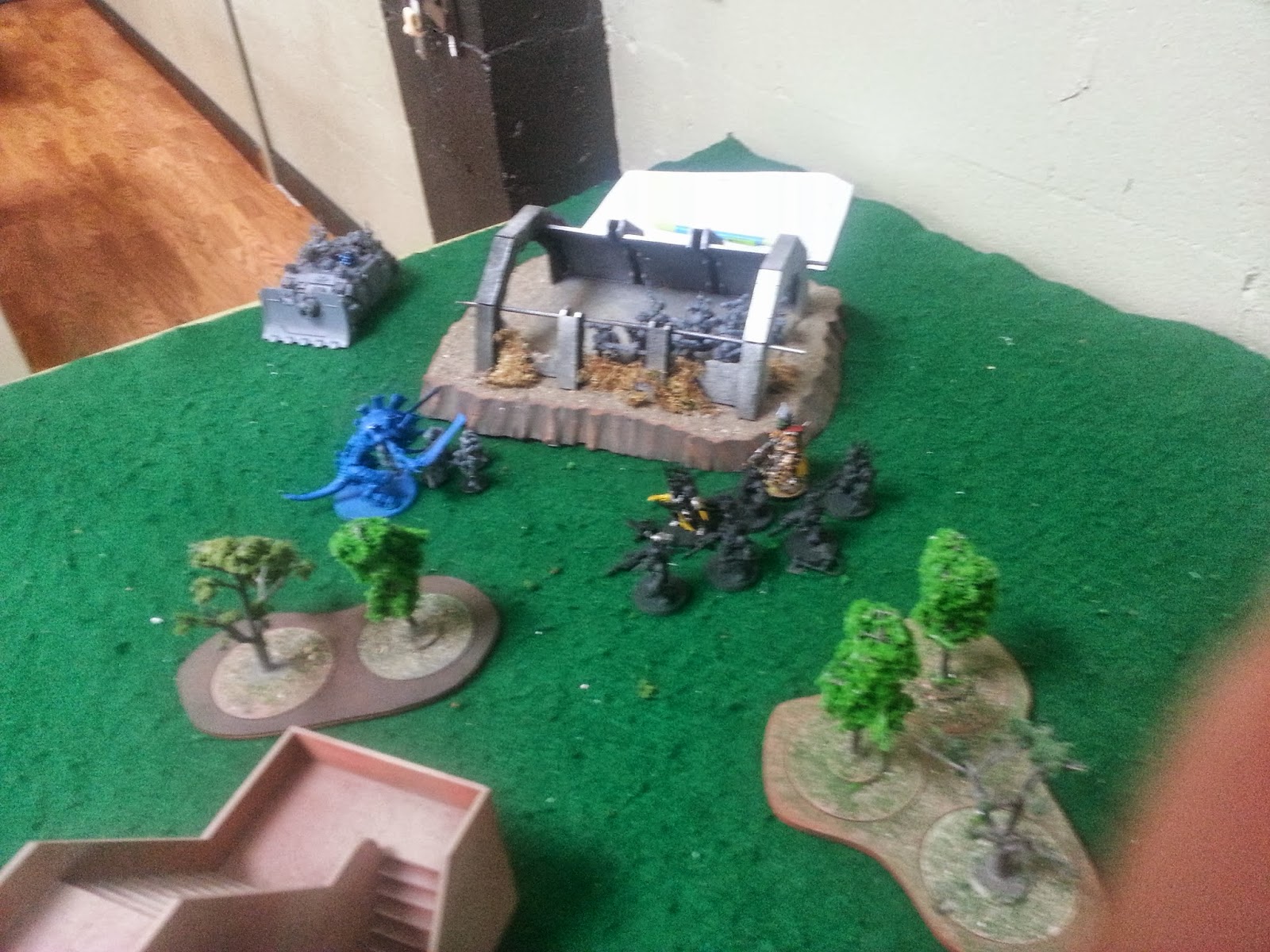 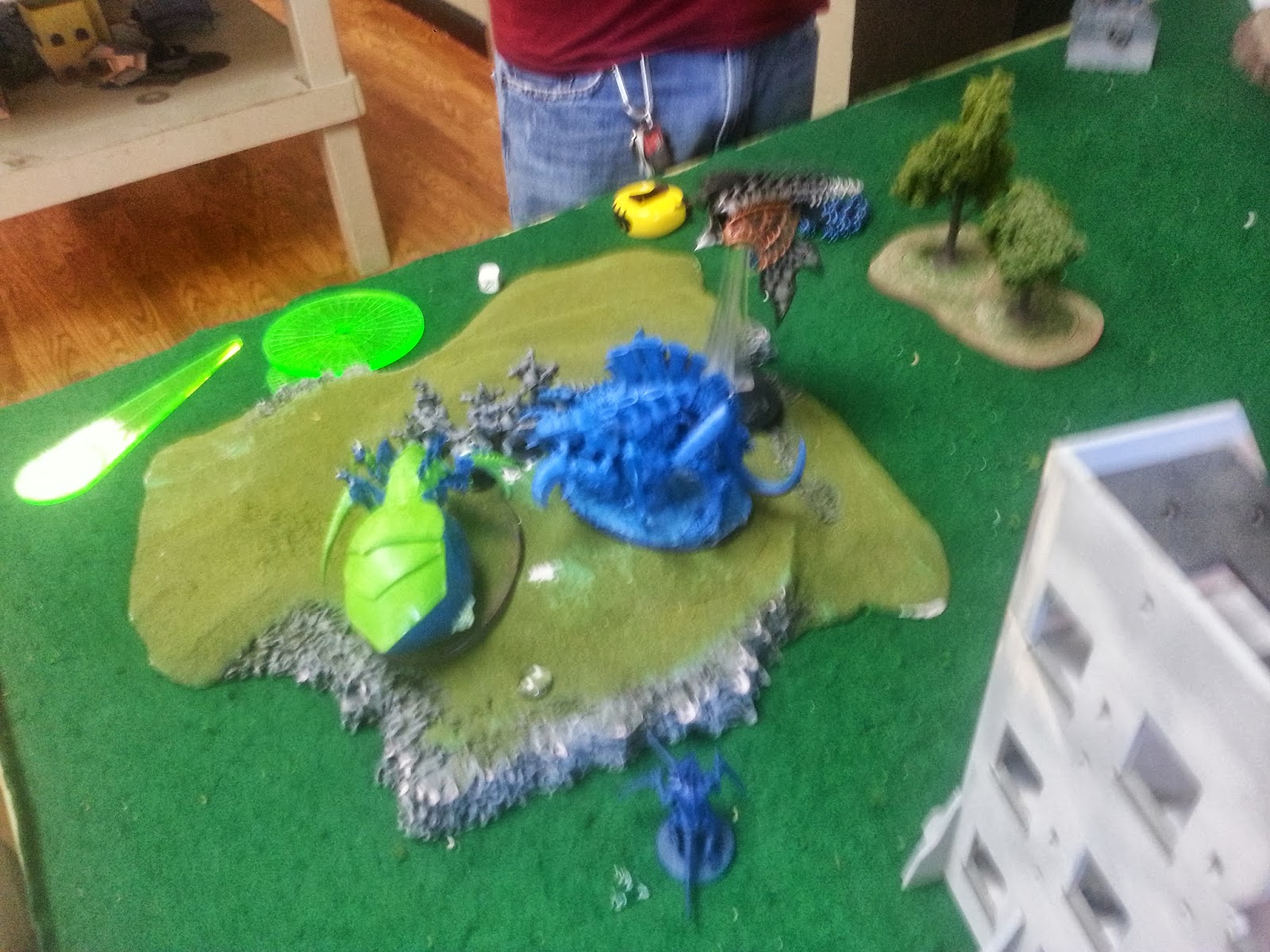 Turn 5:
Chaos: The drake struck the prime and killed him and his marines didn't want to feed another Sargent to the swarmlord so stayed out of combat. the marines died to the tervigons and broke. The Swarmlord wiped out the rest of the cultist.
Bugs: The  Swarmlord went after the Vindicator while the tervigons pursued the CSM.  Swarm blew up the tank and the tervigons ate a few marines but they held.  We rolled for turn 6 and we rolled a 2. Game over bugs won! 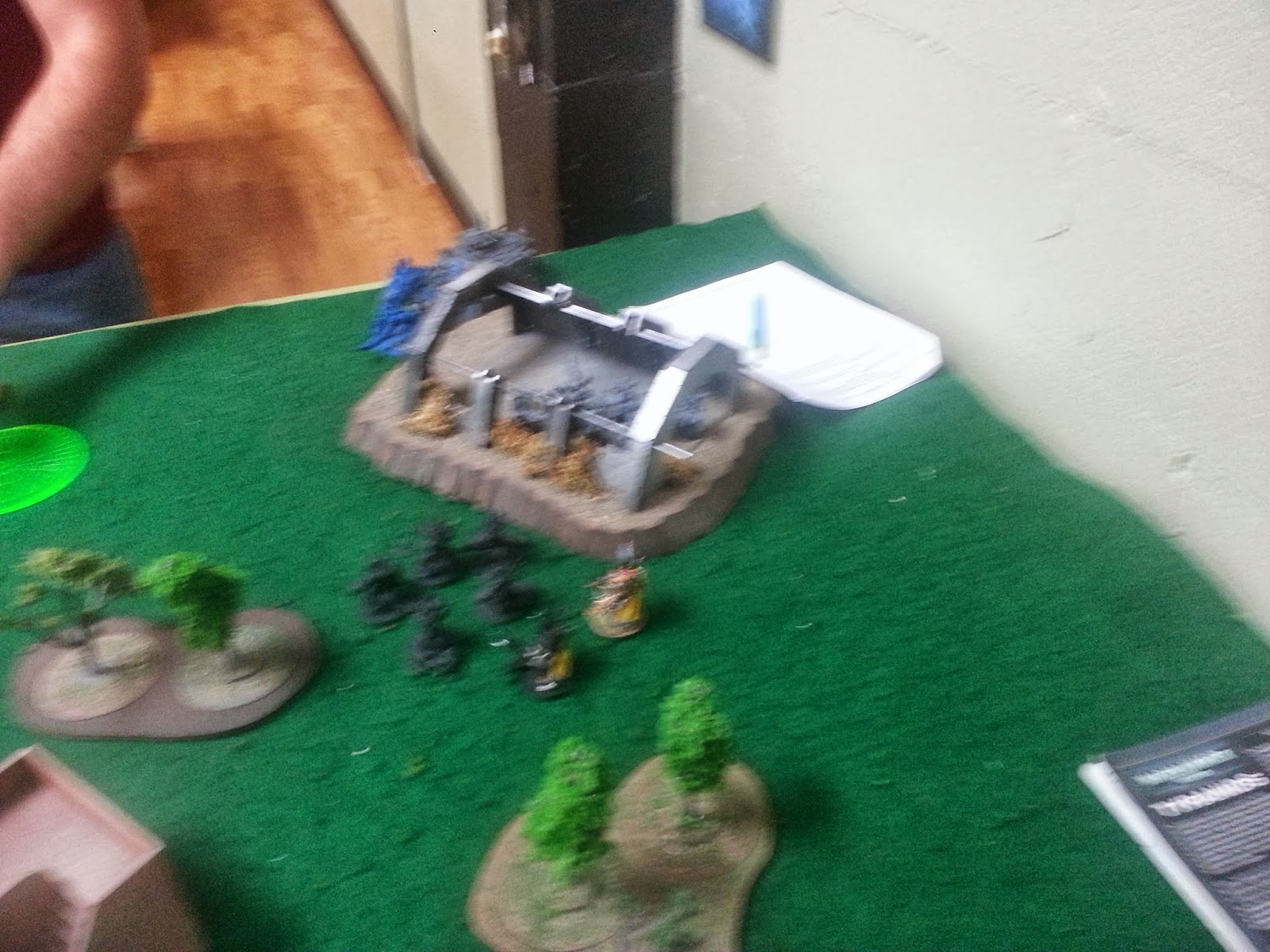 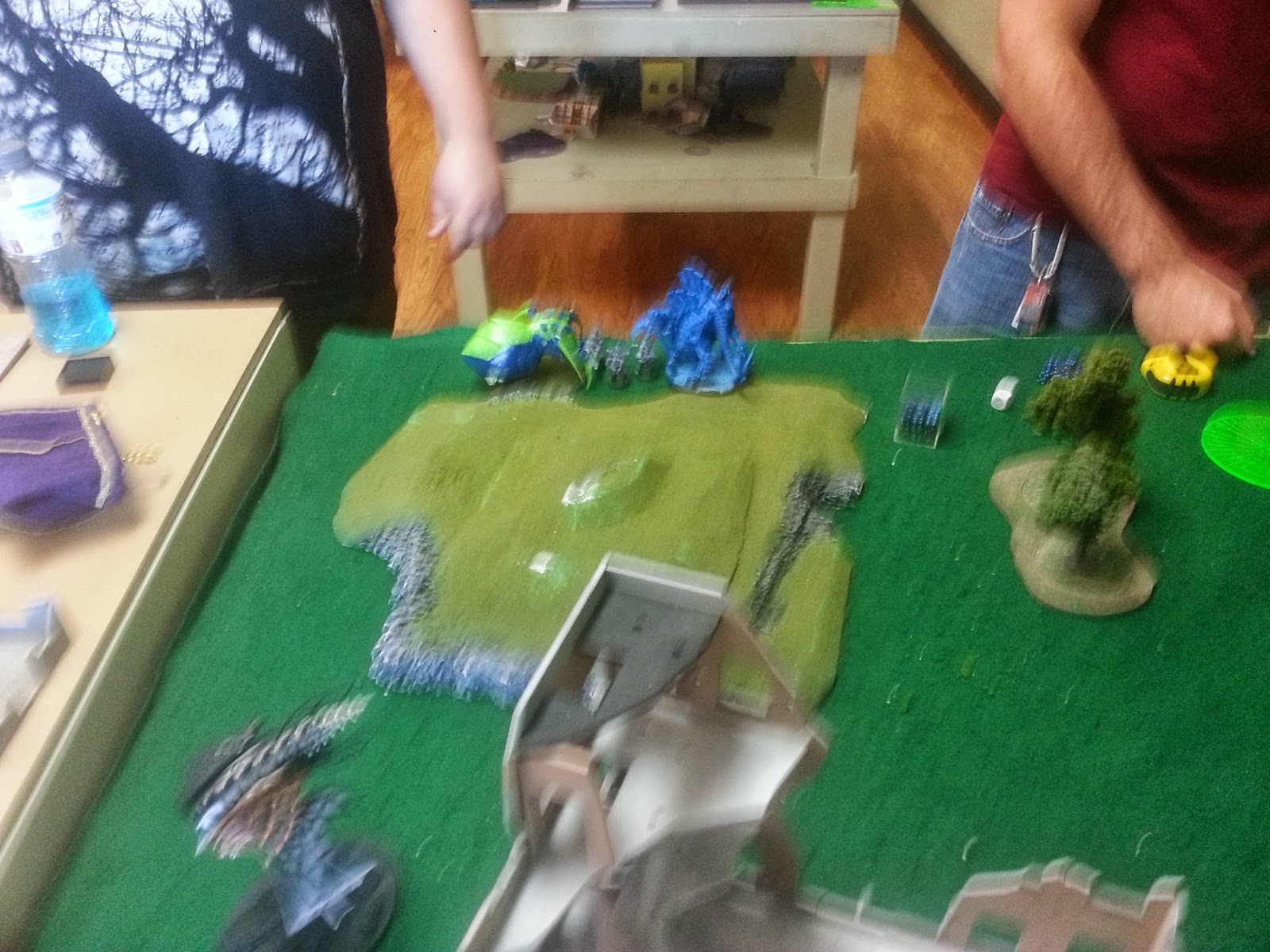 As usual it was a bloody affair.  I think if he would have had the flamer on the helldrake it would have been a lot different. He could have also tried to assault the swarmlord with his terminators to keep him from the vindicators.  Sure he would have to challenge with his captain but he might have made his invun or the rest of the squad might have got me the next round.   Over all I think He played a little shy with his terminators and too aggressive with his big guns.  I don't know if the grinder has different weapon load outs but he seamed to be more in your face.  Not a great choice against big bugs. Also leaving the prince on the ground for my 10 guants to shoot might have been another mistake.

It was a fun time.  I look forward to playing again.  Alex was a cool guy and the terrain was cool.  The most important thing for me to remember is always bring your mycetic spores.