the X-Wing Tractor Beams got me... 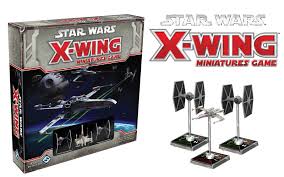 Today I want to talk about the game X-Wing.  I know I am very late to the party (maybe too late) but when my brother who doesn't play any miniature game goes out and buys 2 starter sets, slave 1 and the falcon my curiosity is piqued.  I have seen a lot of people get into this game and I watch a few games both live and video (thanks Miniwargaming.com and Wesley Crusher). It seems like a fun quick game with strategy and  planning.  Today I will go over the Light side and Dark side that I see with getting into this game and then talk about my limited experiences.

The first thing I noticed is there little assembly and no painting required.  So, for one who has several large armies in 40K, it is nice to just pick up a box, punch out a few tokens  put the ship on its pole and you are ready to rock. You don’t have a lot of terrain to place or make.  Cleanup is pretty easy even if you have baggies or containers for all your pieces it is still easy peasy 2-3 min cleanup.  Where as with 40k putting away my army can take 10 min. 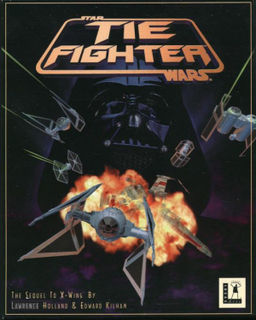 Next up on the light side I get to relive my childhood memories of playing TIE Fighter on the pc where I get to command a squadron of TIE fighters and crush the rebel scum.  (Yes I am an Empire kind of guy,  what can I say I like the bad guys ^_^) Going way back, I always wanted a game with my micro machines that pitted TIE Fighter against X-Wing. 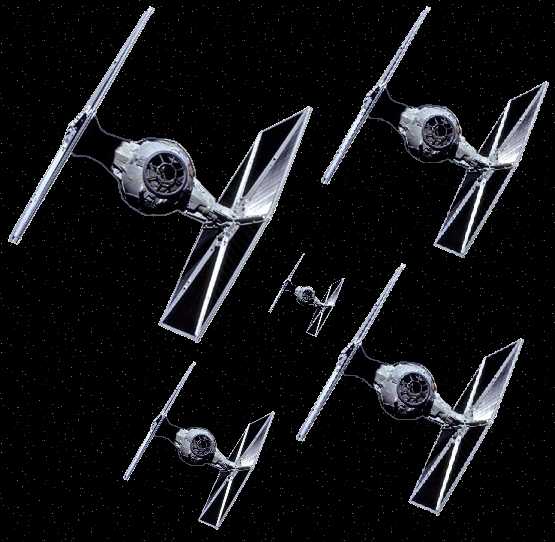 Lastly games are small and you only need a few minis to play.  Even if I wanted to get into the game I probably would not pay much more than getting one of the new Big Beasties from GW.  While I am looking forward to the new bugs my wallet is not.  If I was going to get into the game I would get a starter, an extra TIE fighter, a couple of TIE interceptor , and maybe a TIE advance or Bomber. I love the TIEs I always have.  I have all the versions of TIES in lego format. My dream would be a Star Destroyer but those would be bigger than the table  so fat chance of getting those unless they make a capital ship version of the game ^_^

So we have seen the good but I have seen the bad as well. I want to start with the biggest flaw.  While it was popular for a month or so, I don’t see many people playing anymore. Maybe it is because I don’t get to the shop as often as I like but the people I know who have bought some don’t talk about playing it very often.  I have been burned a few time buying stuff for a game while it was new and hot.  I buy enough to get going and commit to more than just a starter pack and then it dies out.   I have Wow minis and a Dwarf army to prove it. (I had more but dumped them at the Bazaar).  The last thing I want is to do is get more stuff that will sit and gather dust. Even if I could rope the fiancée to play it gets stale going up against the same opponent time and time again.  For a game this small you need 6-8 people to keep from just replaying the same game time and time again.  IT is like if you and your Buddy play 40k.  If you don’t see a bunch of different opponents it become rote and the fun drains out. That is why I love League night and tournaments.

This brings up my other baddie.  There is only 2 sides and a handful of ships for each side.  While I am sure there are the fluff bunnies like me who just want to make the “RRRRRRRRRRRRR” sound as my TIE Fighter flies around I know the majority of the people (especially at tournament) will have an optimal build and while each opponent may be different each game will be another deja vu rematch.  With 40k there a dozen of armies to choose from and while you might see a few “the flavor of the month” armies, people tend to stick to a core army and maybe add an ally of the new flavor.  I know when I went to Adepticon all the armies were there.  When I went past the X-Wing tables I saw a bunch of Falcon armies and TIE swarms.  It was like they all ready from the same blog. 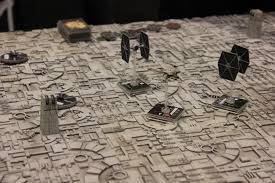 I have play the game a total of 3 times now.  Once when it first came out with the Store manager at my FLGS.  Once with a friend because I was the odd man out on League Night and just this weekend with my brother.  I am 2-1 right now.  The game is fun.  I need to read the rules so I know them better instead of going by what people tell me.  I think you should use a textured mat to play since a smooth table makes it easy to nudge the pieces around.  Finally while the game is simple I think I need a few play throughs to get the sequence down.  It is like Warmachine I always forget to allocate focus. It bums me out.  Several times I forgot to focus or dodge or use an ability.  The more I play these things will become natural.

I am still on the fence about this one. If I knew that I could find some cool guys to play with in my new home I think I would pick it up in a heartbeat.  So I have to ask myself will I get more use out of these or would I get more use out of Catan or Casseronne? X-Wing is fun but I could have a game night with my Fiancée’s and mine friends with the others.  I mean come on who can pass on a game where you get to say “Who has Wood for my Sheep?” 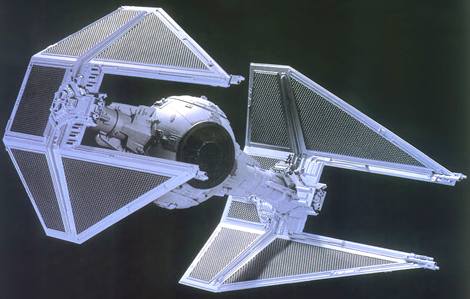