First impression of the Mawloc. 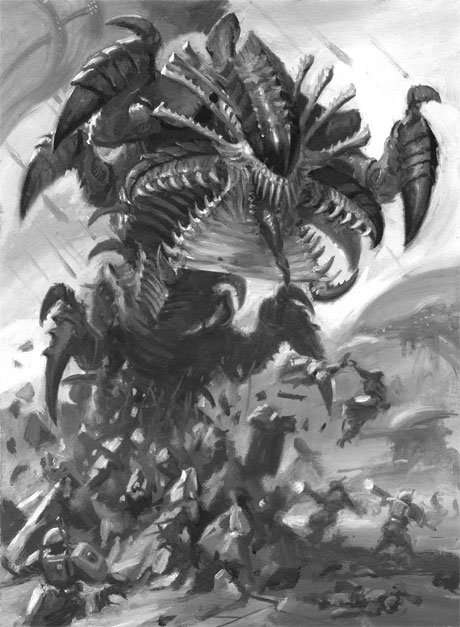 Last night I got to use the Mawloc vs the new shiny Tau Empire. I had him in reserves but but I should have had him on the board turn one.  That way he could soak up some fire and then burrow on my turn and for sure come up turn 2.  He still came in on turn 2 but scattered off and hurt no one. Luckily the Doom drew a ton of fire and he lived to keep going.


I didn't burrow again since I had meaty targets to assault but then I found out he is not a melee monster.  I think for the points a screamer-killer Carnifex is more dangerous.  With no range at all he can not fend for himself. or for a few points more a dakka-fex could ruin a day or two.  For 30 points more you get a trygon that has 6 shots and 6 attacks with a WS 5 and reroll on all to hits.  I think I will pay the tax. 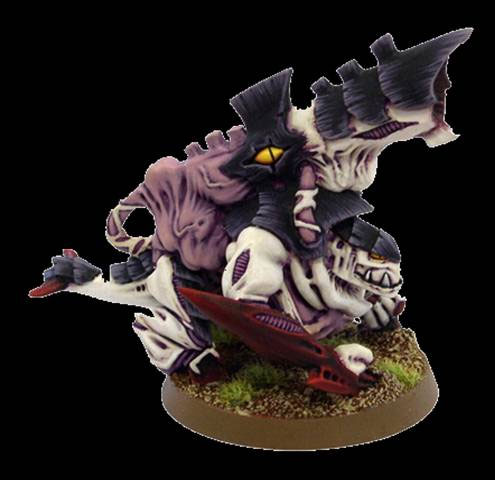 If I look at the Biovore I lose the a scary monster but gain several models that if they ignore them can lay down some suppressive fire although it is pretty weak. I could also bring 3 hive guard who are toughness 6 and they have 6 wounds as well.  They have the S8 gun but it is only AP4 so it is only good at taking out light armor. 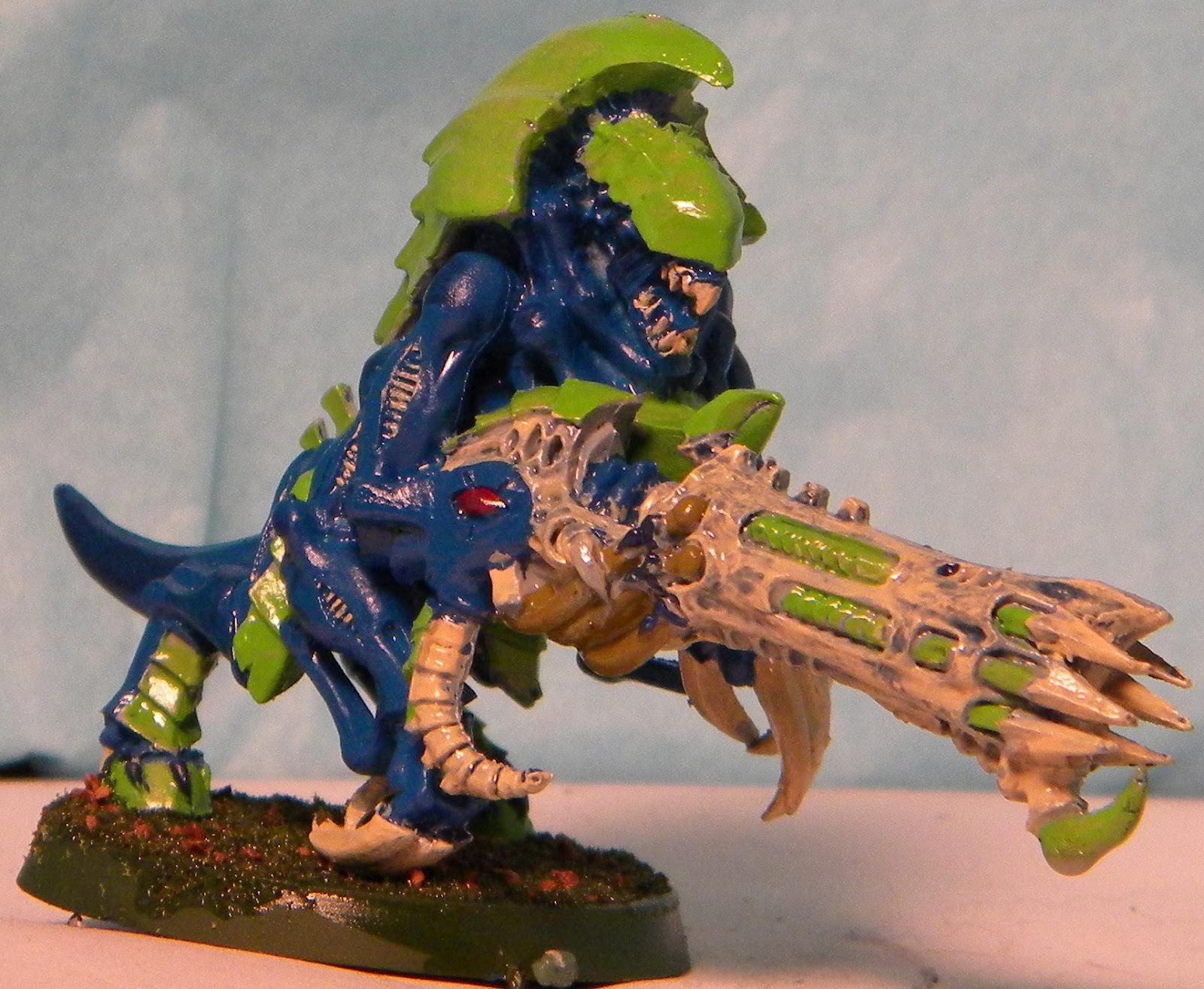 In the end last night, I made several mistakes that cost me the game.  MY opponent had some errors as well but nothing that really would have cost him the game.  Actually if I had put my 2 tervigons on the Riptide and just slapfested with him I think I would have one since he could not kill them  and they could have given synapes over 2 objectives and pumped out more babies at will.

I still have not found a suitable filler for the bump to 2k to go in my army.  It always seems I have 150pts to play around with. I could bring another tyrant with wings or a harpy. This will give me another flying creature that can be grounded easily then mutilated.  I might just have to try a walking tyrant again.  It might work.  It is not like my flying one has ever taken down a flyer.  Usually I am the one going down in flames.

So many questions not enough answers.

on a different note the progress on my Tau is coming along nicely. I hope a wash will help fill in those cracks. 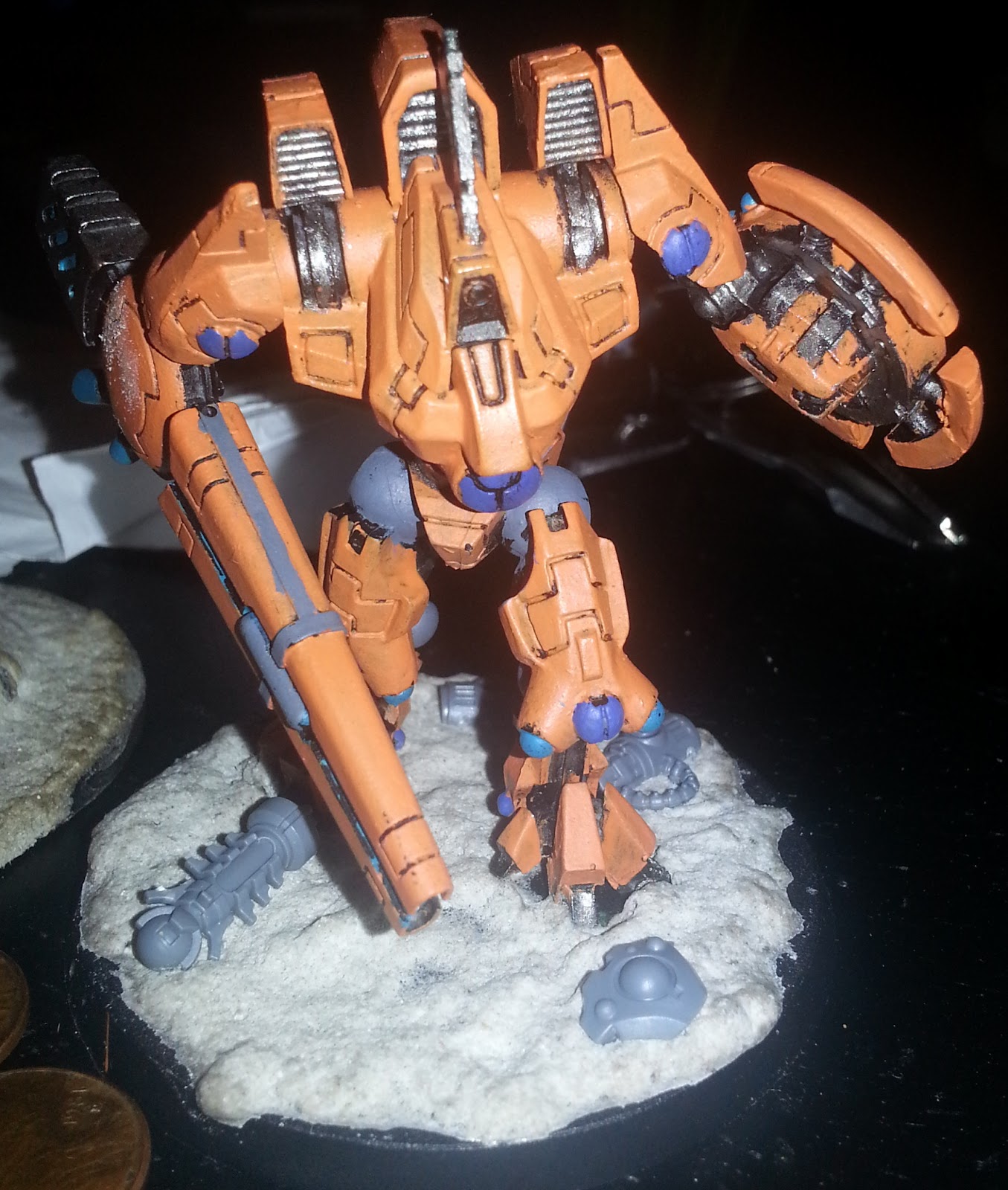 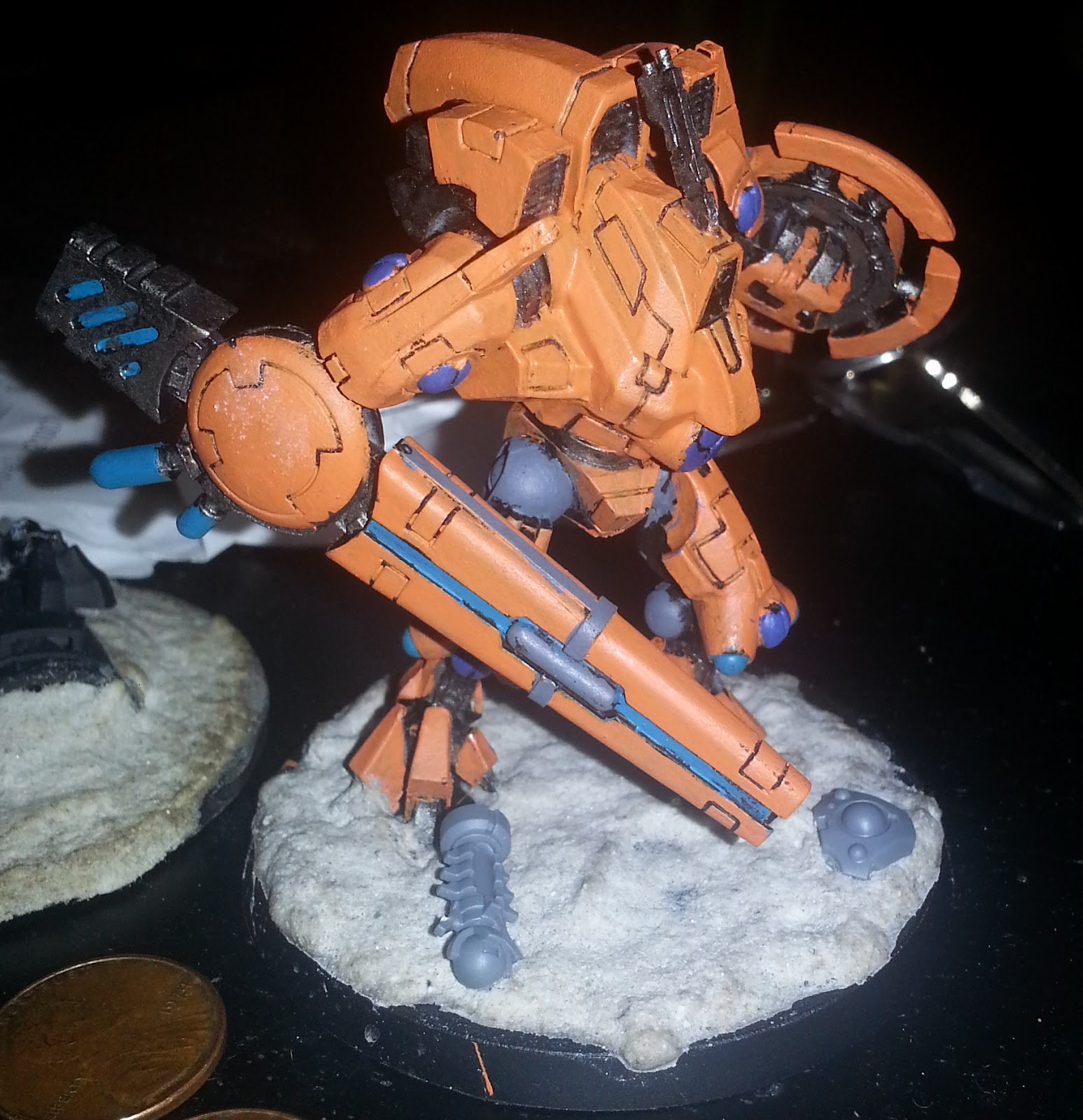 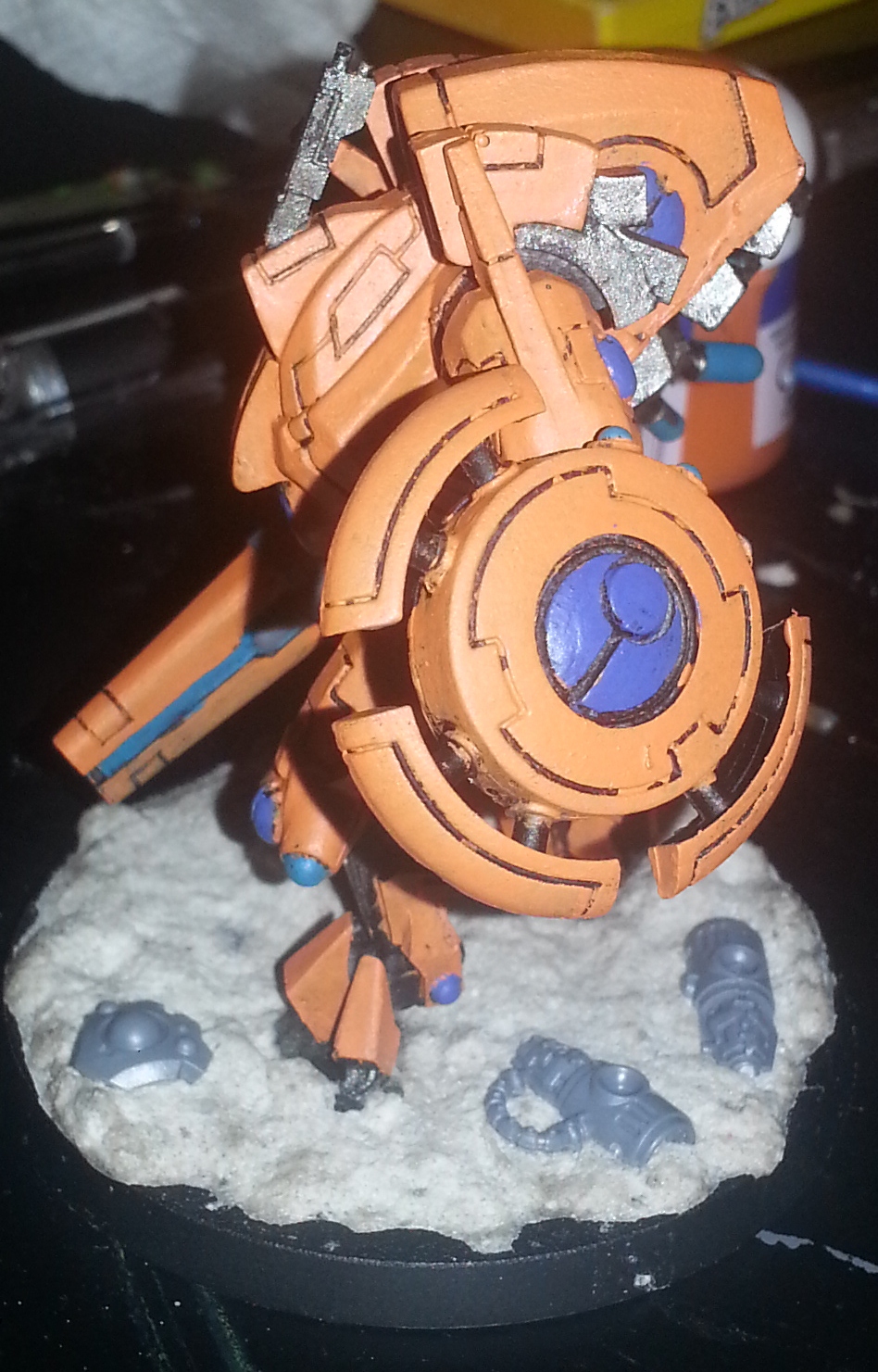 The orange really takes a few layers to get right.I might add in some grey panels as well to break up the solid orange.  We shall see. Right now he matches my other finished suits

Here is my objective marker.  I now see that I will be needing to either green stuff that seem or try using some liquid green stuff. Either way I will have to repaint. 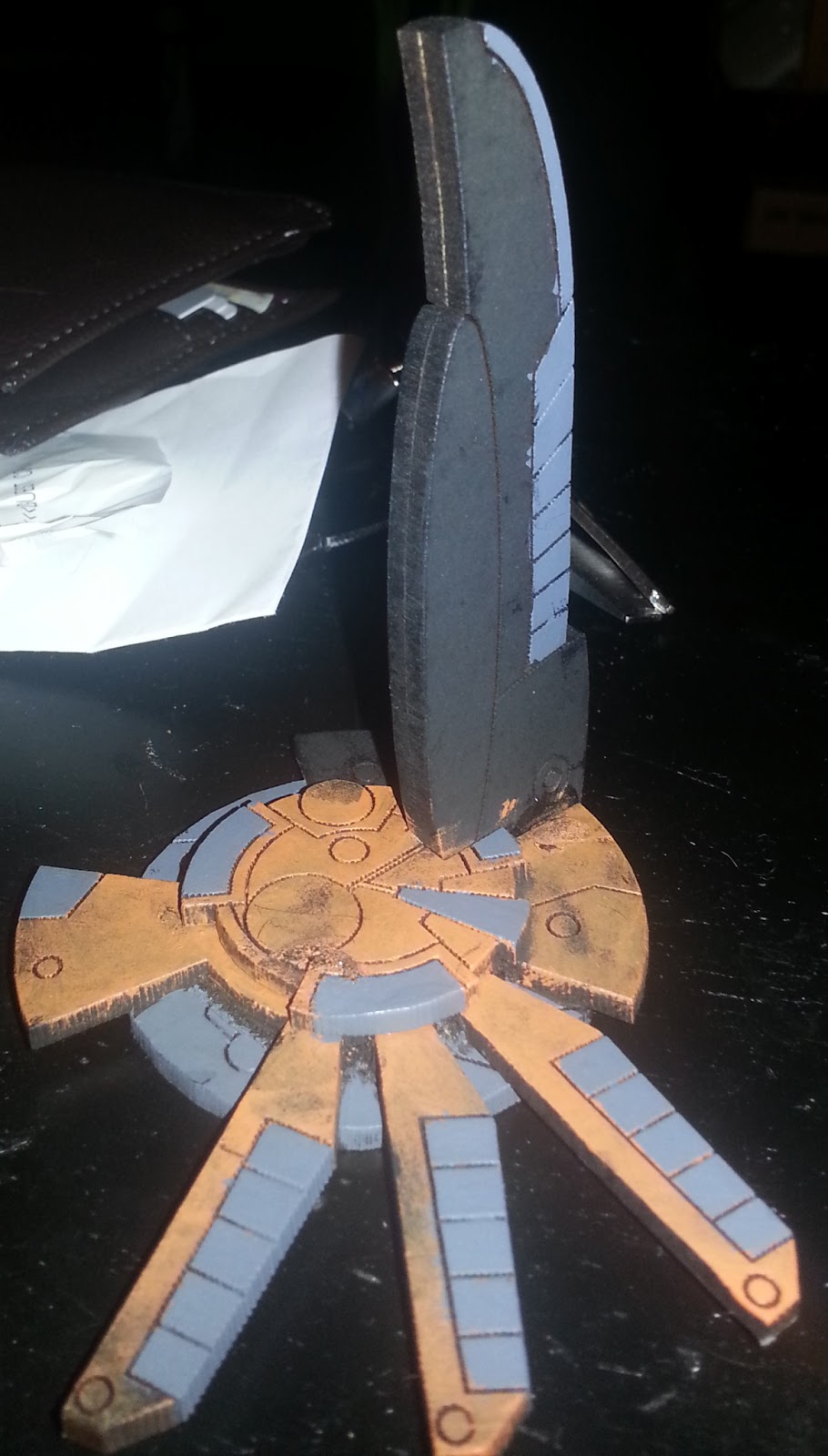