Getting my ass kicked by Matt Daemon... 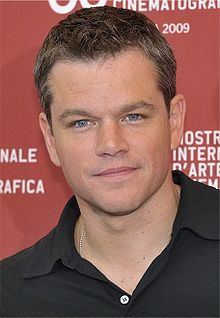 So Friday I played the Chosen1 from Team Snake Eyes and his "friendly" army.  It was a bloddy battle and my robot dudes did not want to get back up.  here is his list 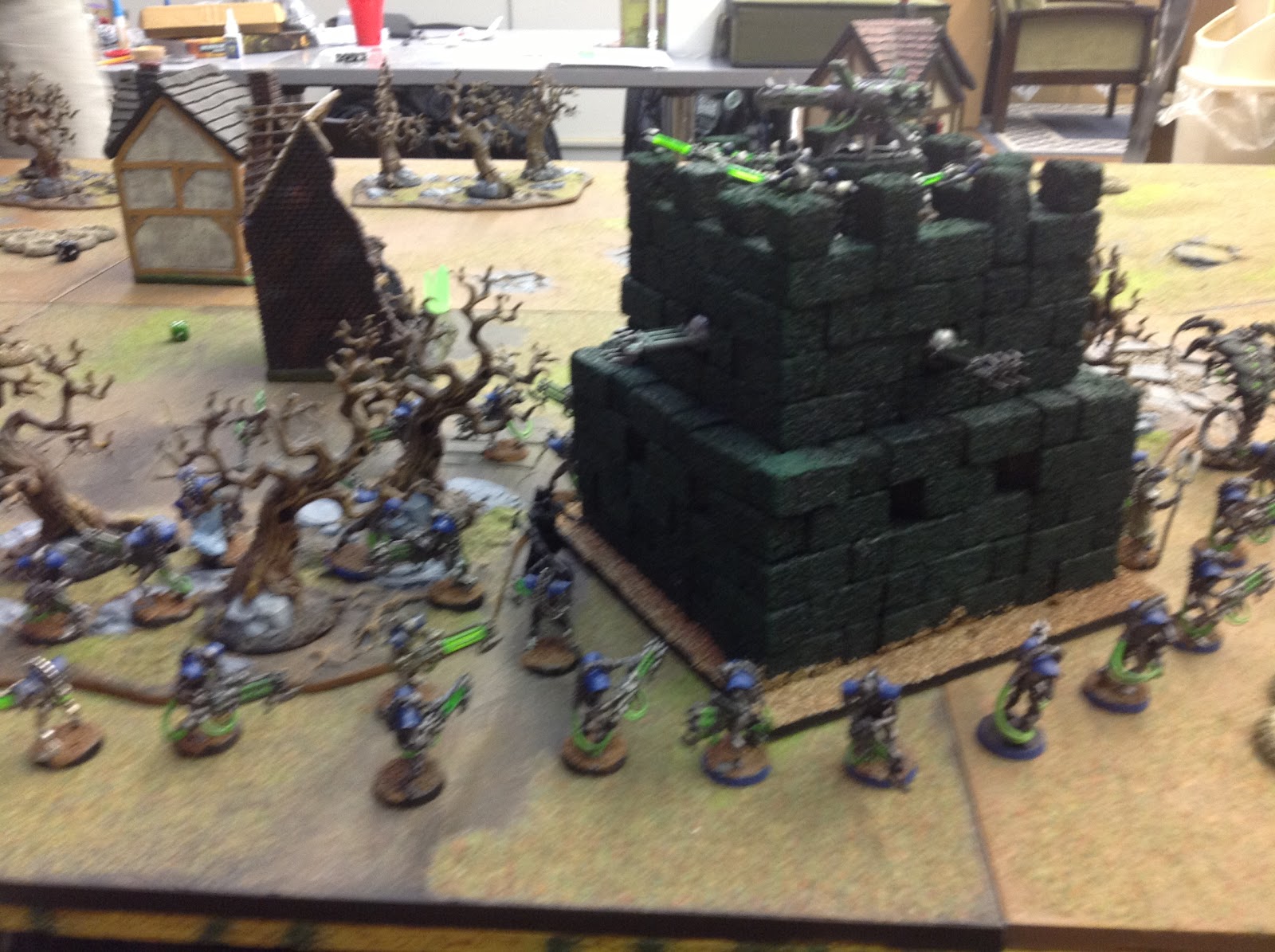 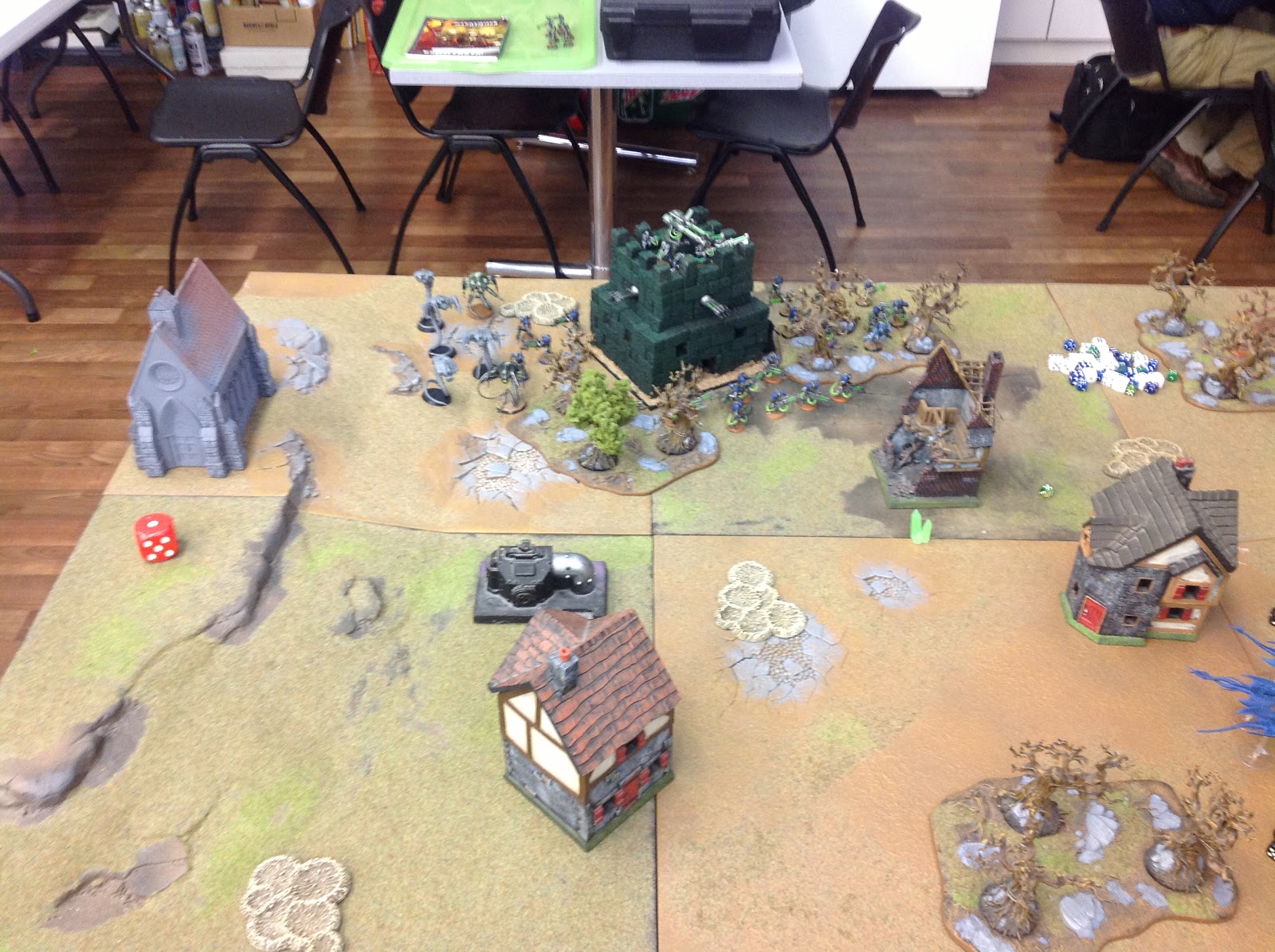 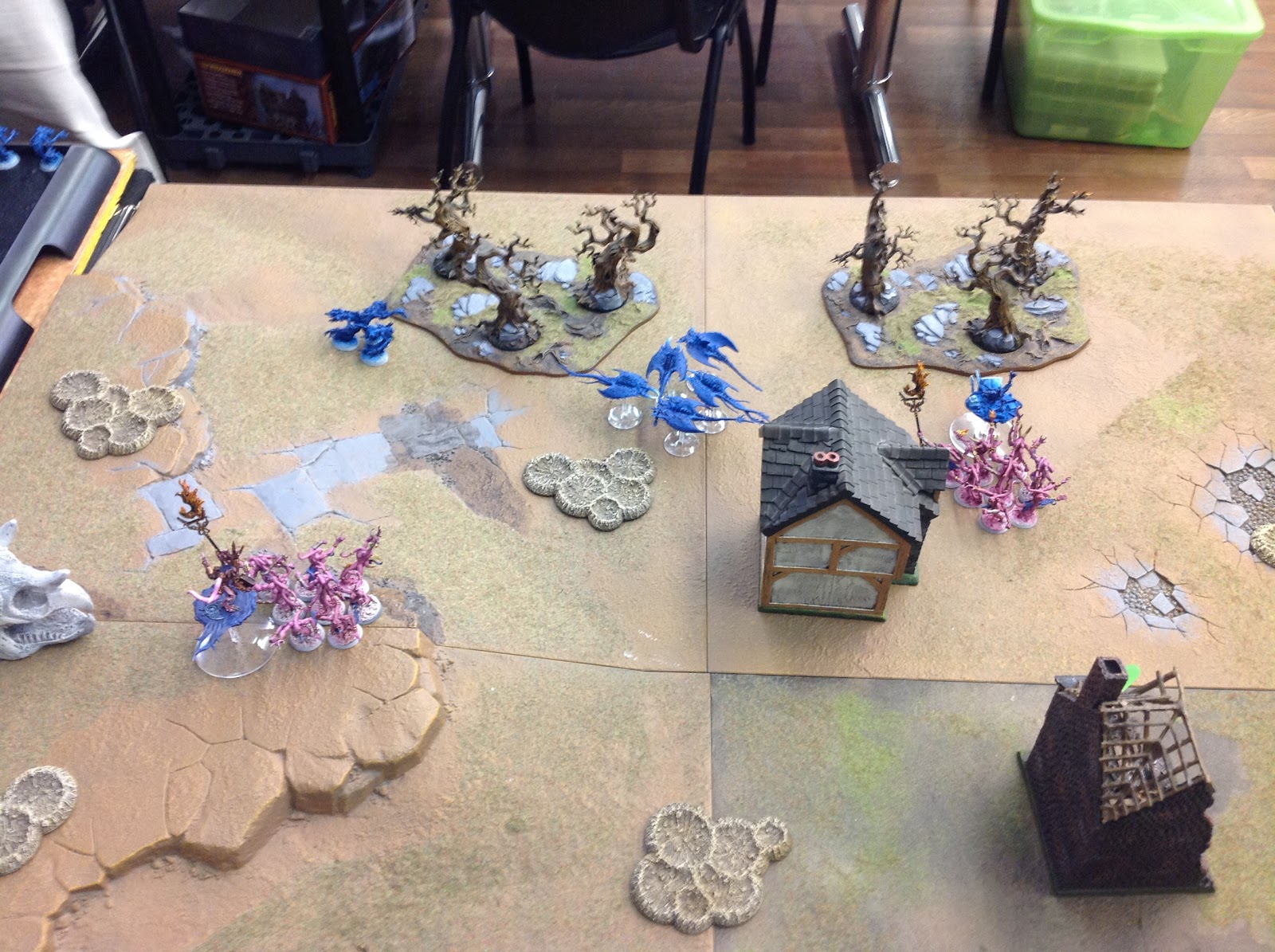 he got his second wave and brought them in conservatively. he did some running and that was it. 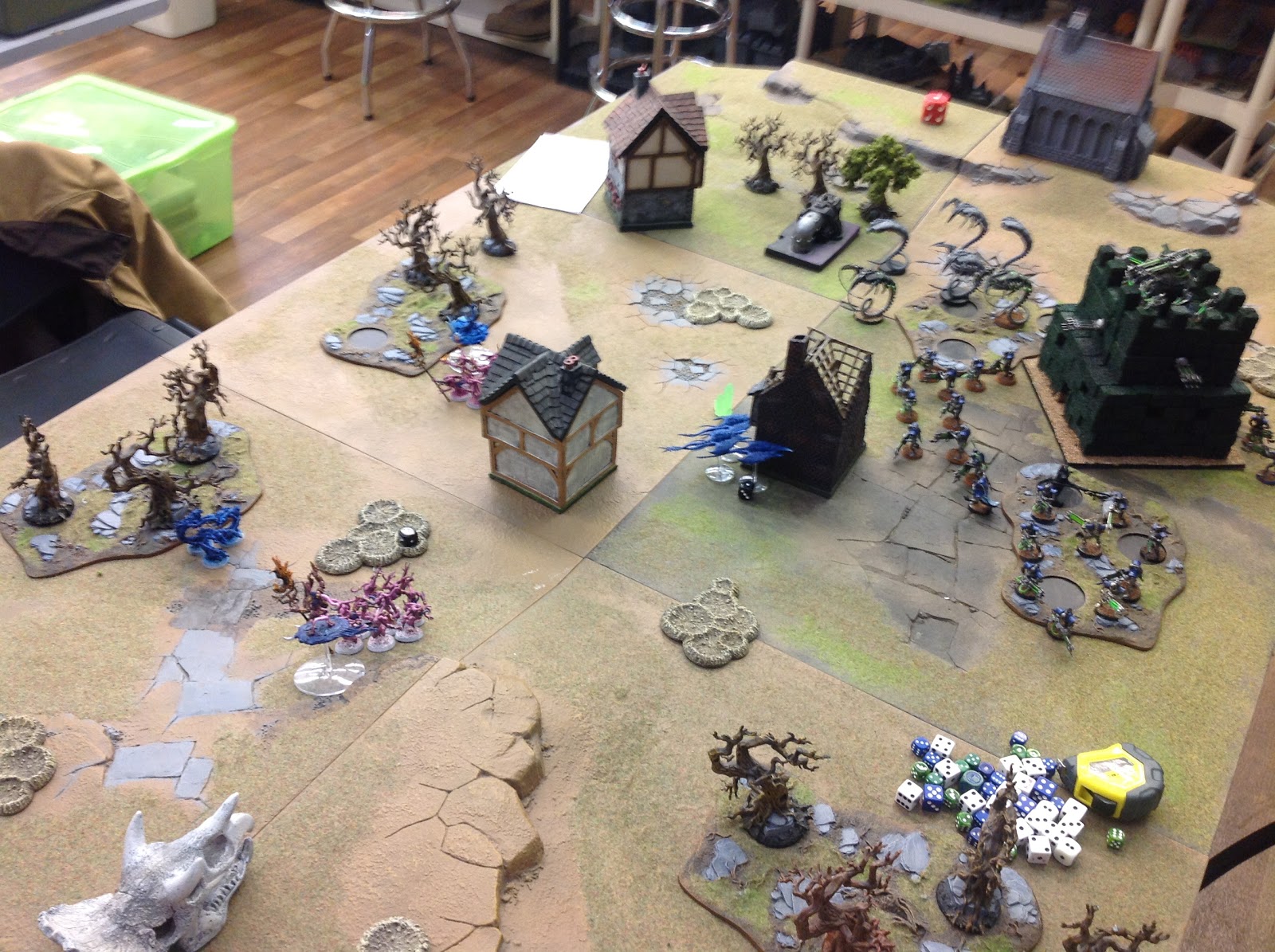 So on my turn I started to move my guys toward the relic my only chance was to pick it up and hide in my bastions before those flamers burn me to the ground. I killed a few screamers and a few horrors

the only thing that got to come in and not mishap was a group of flamers.  They came in and slaughtered a squad of immortals which the screamers finished off with an assault.

Necrons turn 2
My wraiths moved up while mt immortals rearrage to try to get angle on the flamers.  They need to die.  During the shooting phase I put all I can into those stupid flamers but still could not bring them down.  this was going to be bad.  The wraiths did assault 1 horror squad and destroyed them. 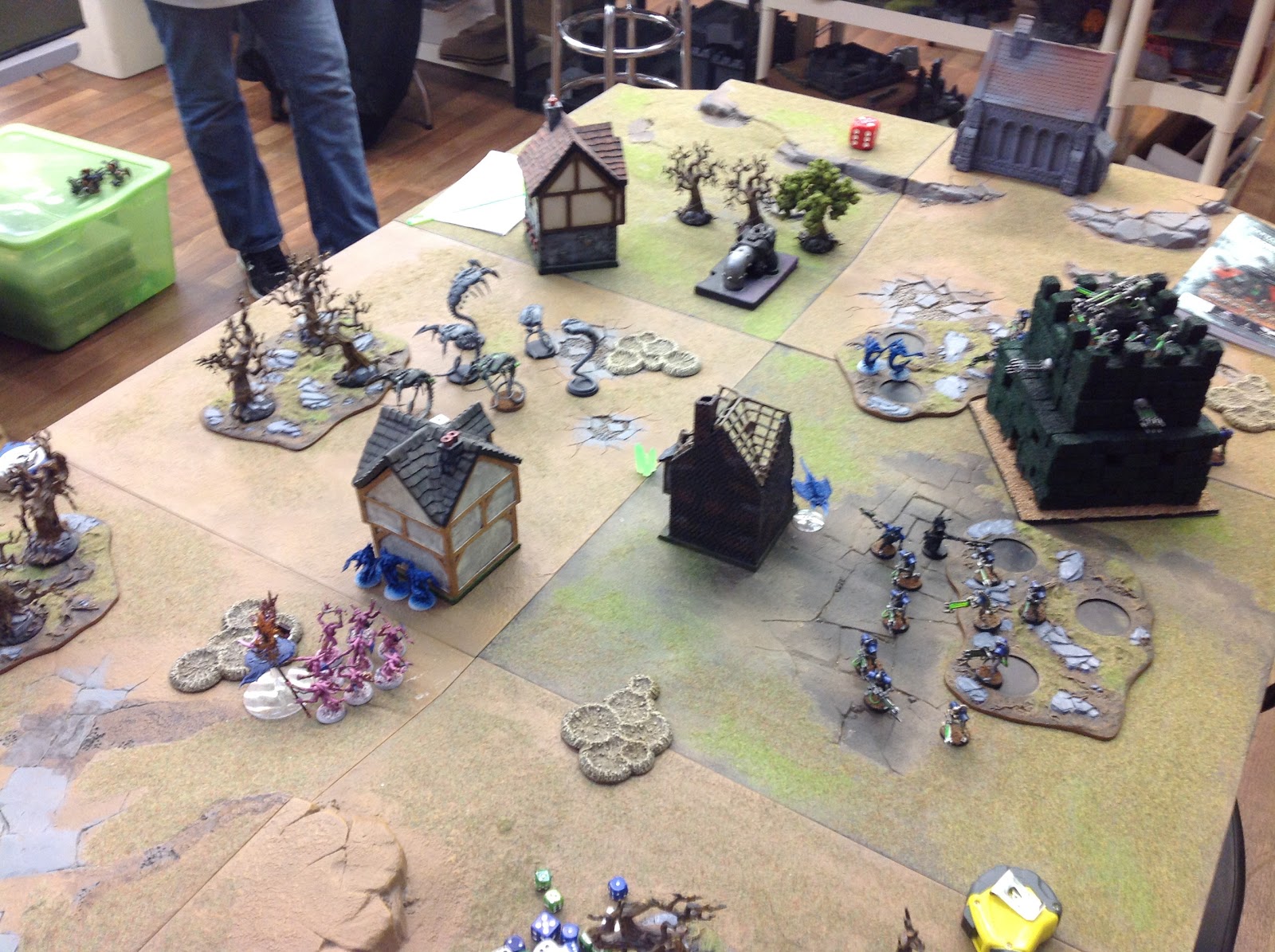 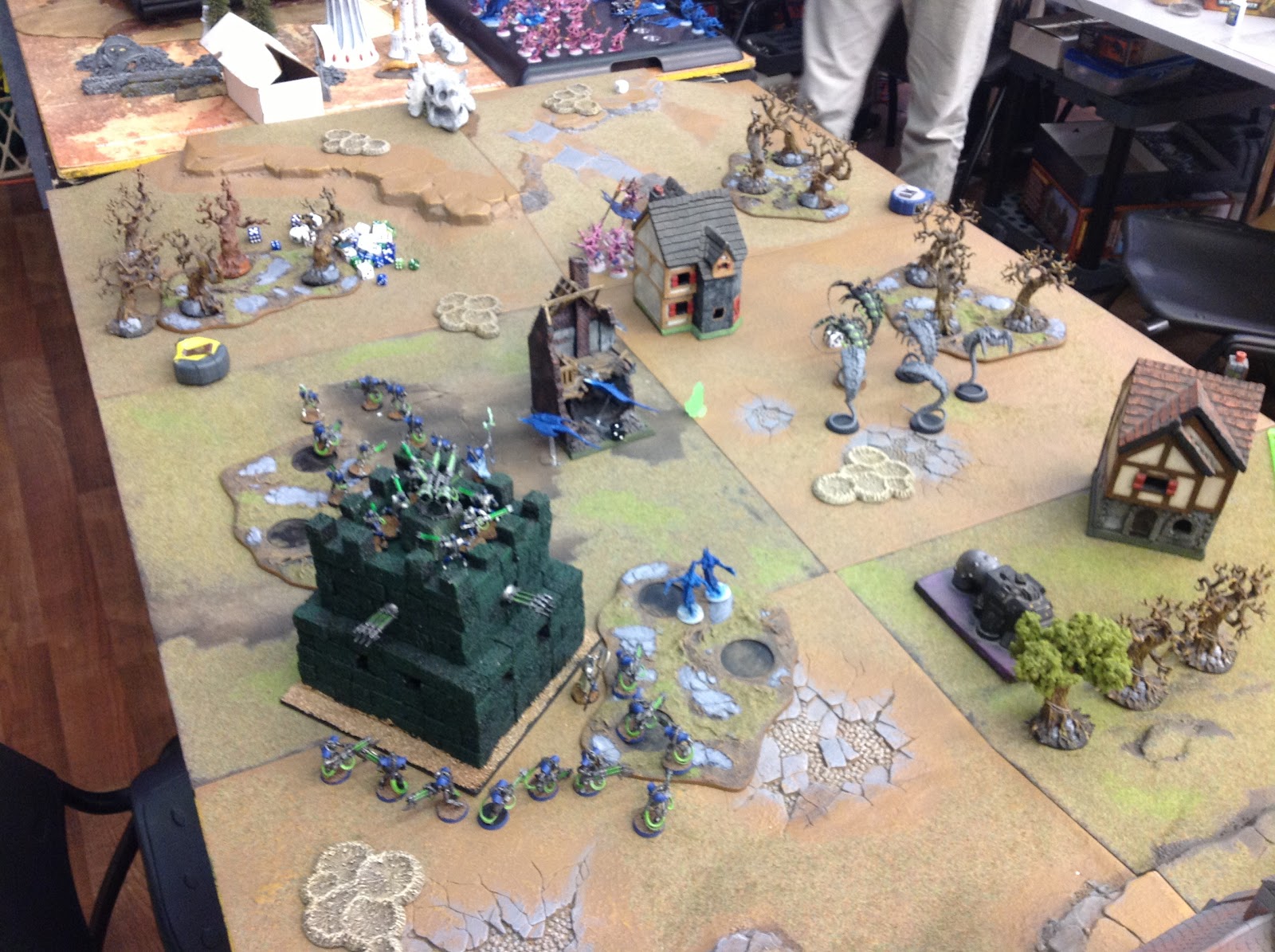 things were not looking good I placed 1 squad be hind the bastion and it was taking forever to circle it in 2 turns I rolled a total of 5 inches of movement.  This kept part of my firepower out of play.  Also I don't think the bastion is worth the points. the Defense line is the way to go if you want a quad gun.  If only I could figure out how to makes some xeno walls. Not that the walls would have saved me from those flamers.

Daemon turn 3
This was the all in turn.  Everything came in and I am scared. His last group of flamers came in right on top of me.  Perfectly lined up to lay down some fire on my immortals. he killed 9 of my guys and then 5 of them stood back up.  Finally some good luck. He also turboboosted his screemers to try to inflict some wounds on my wriaths but unintentionally (so he says) blocks them from going after his Warlord. 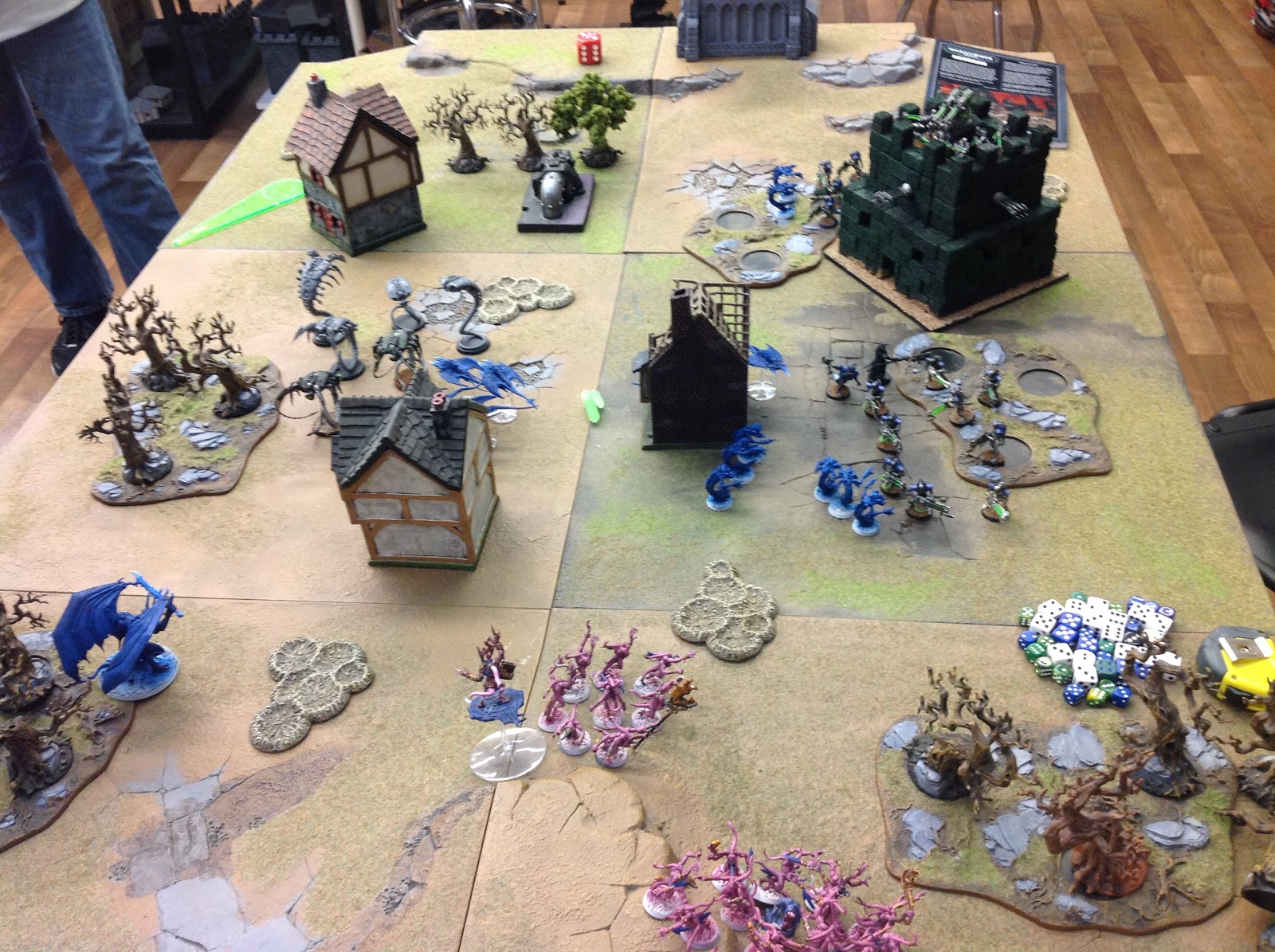 Necrons turn 3
I tried to go after his warlord with my wriats I alos moved to grab the objective.  My one immortal squad decided to move around the forest.  During my shooting I killed the flamers in the trees and one squad of flamers shooting at my other immortal squad
During the charge my lead wrait was killed and I didn't get to chagre in. 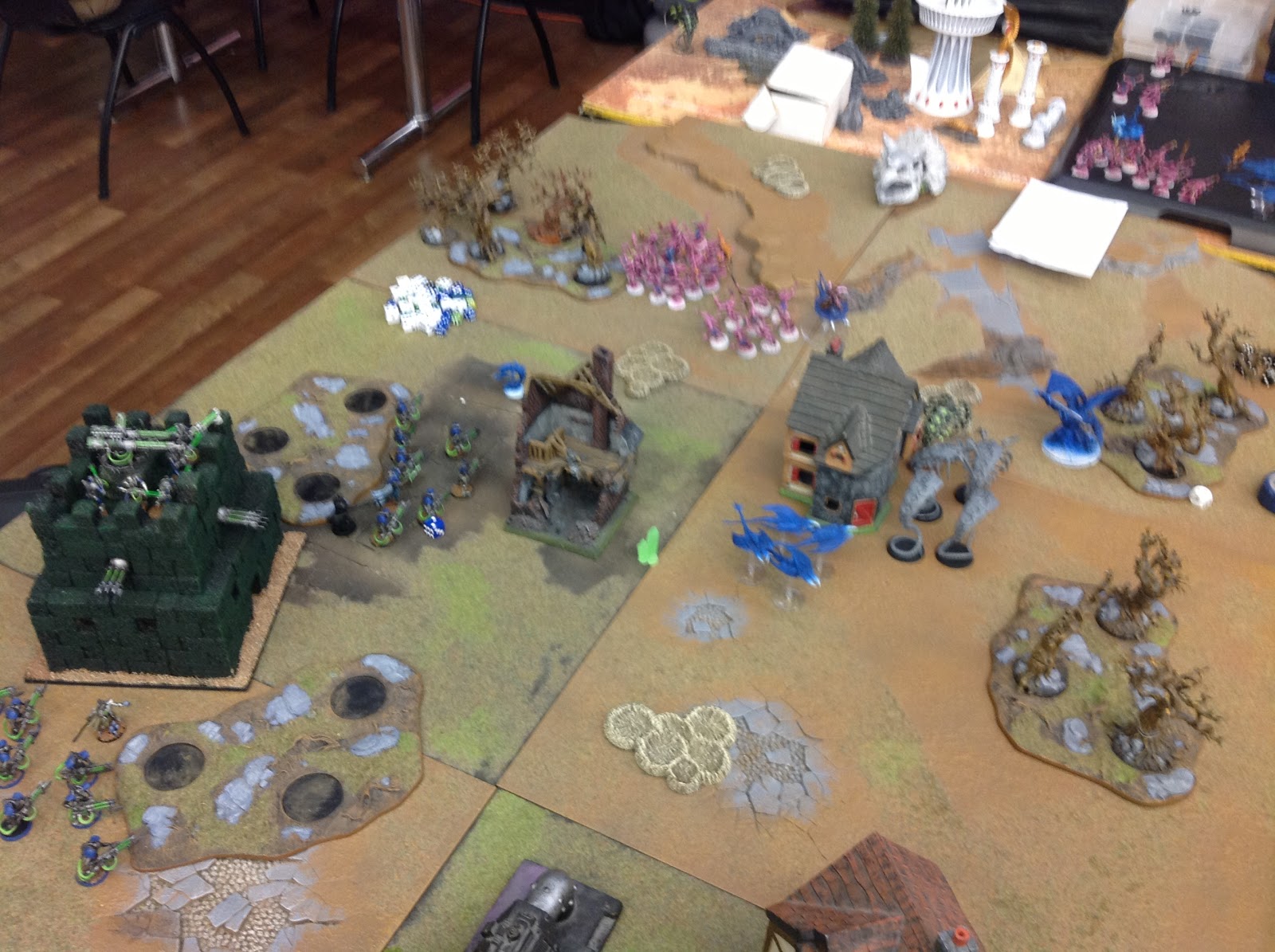 He brought over his daemon prince and his big squad of horrors.  he then destroped my immortals the lord and my overlord.  Only the overlord stood up then he got charged by the prince killed and stood back up again. 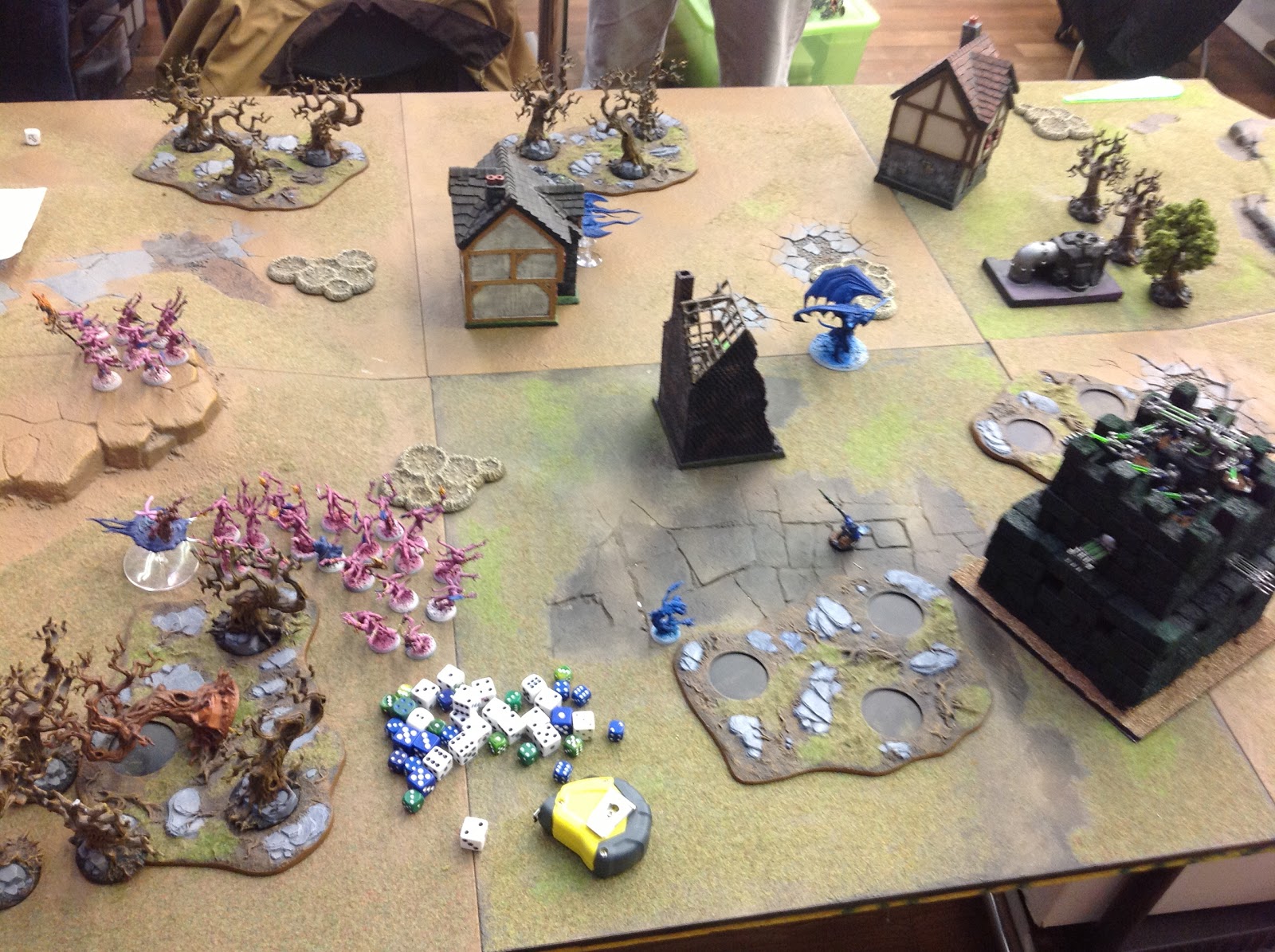 Necrons turn 4
I brought a unit of warriors out to try to get to the objective shooting was ineffective the wraiths were still trapped by the screemers I had 3 wraiths left where he had 1 Screemer. Things are not looking good for the necrons. 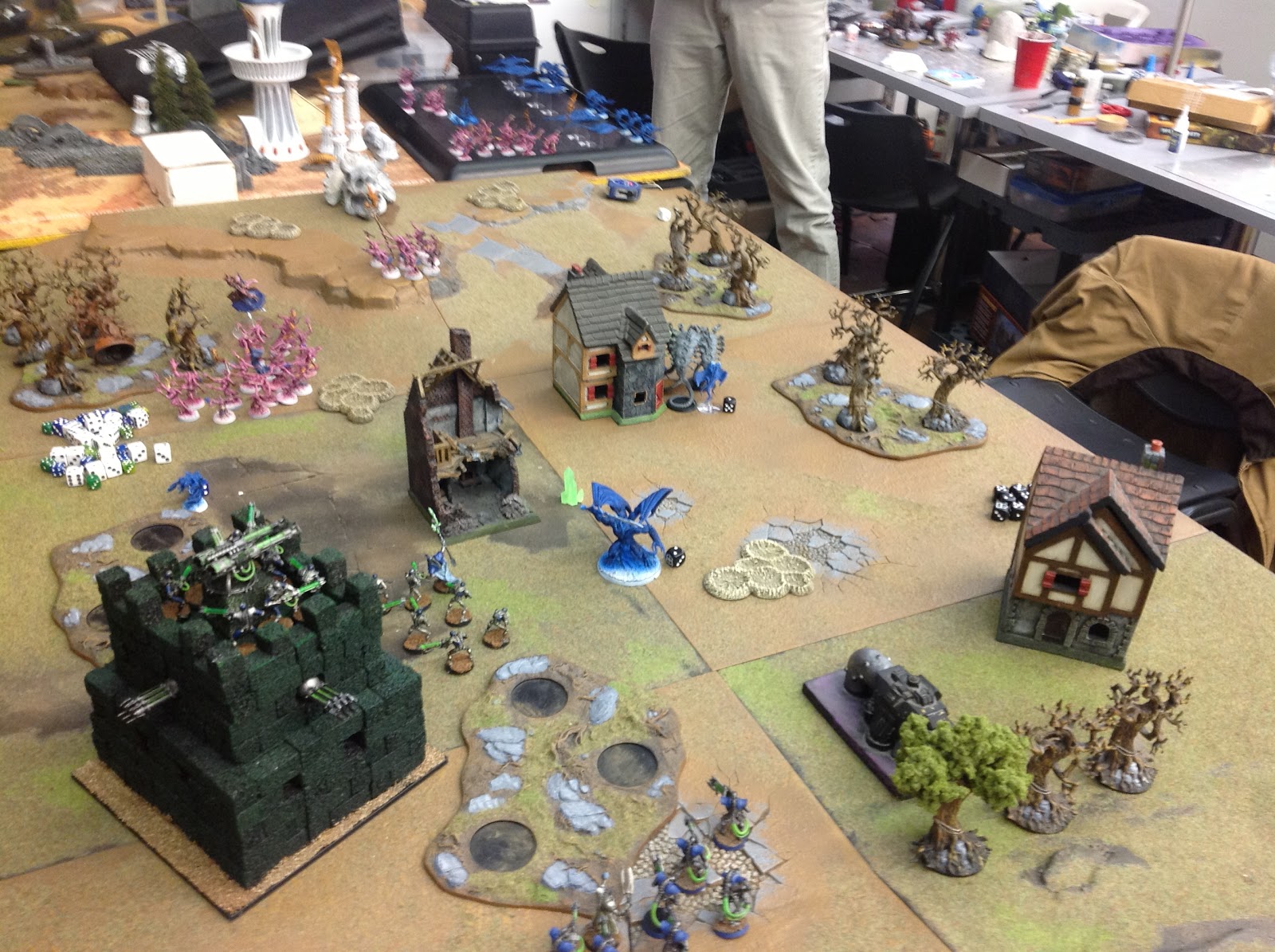 Daemons turn 5
He started to move his guys toward the objective. he gunned down the warriors and overloard who did not get back up. The wraiths lost one more to the screemer before finishing it off.

Necron turn 5
I was down 2 points to 0 and I needed to get the relic to win or kill his warlord and get the line breaker point to tie.  I decided to go after his big horror squad.  Unforunatley enough of them were out of the whipcoil influence so they struck first and killed them.  My immortals tried to moved to the objective but only ran 1 inch.  I regret this move since this left his remaining flamer to cook these guys. 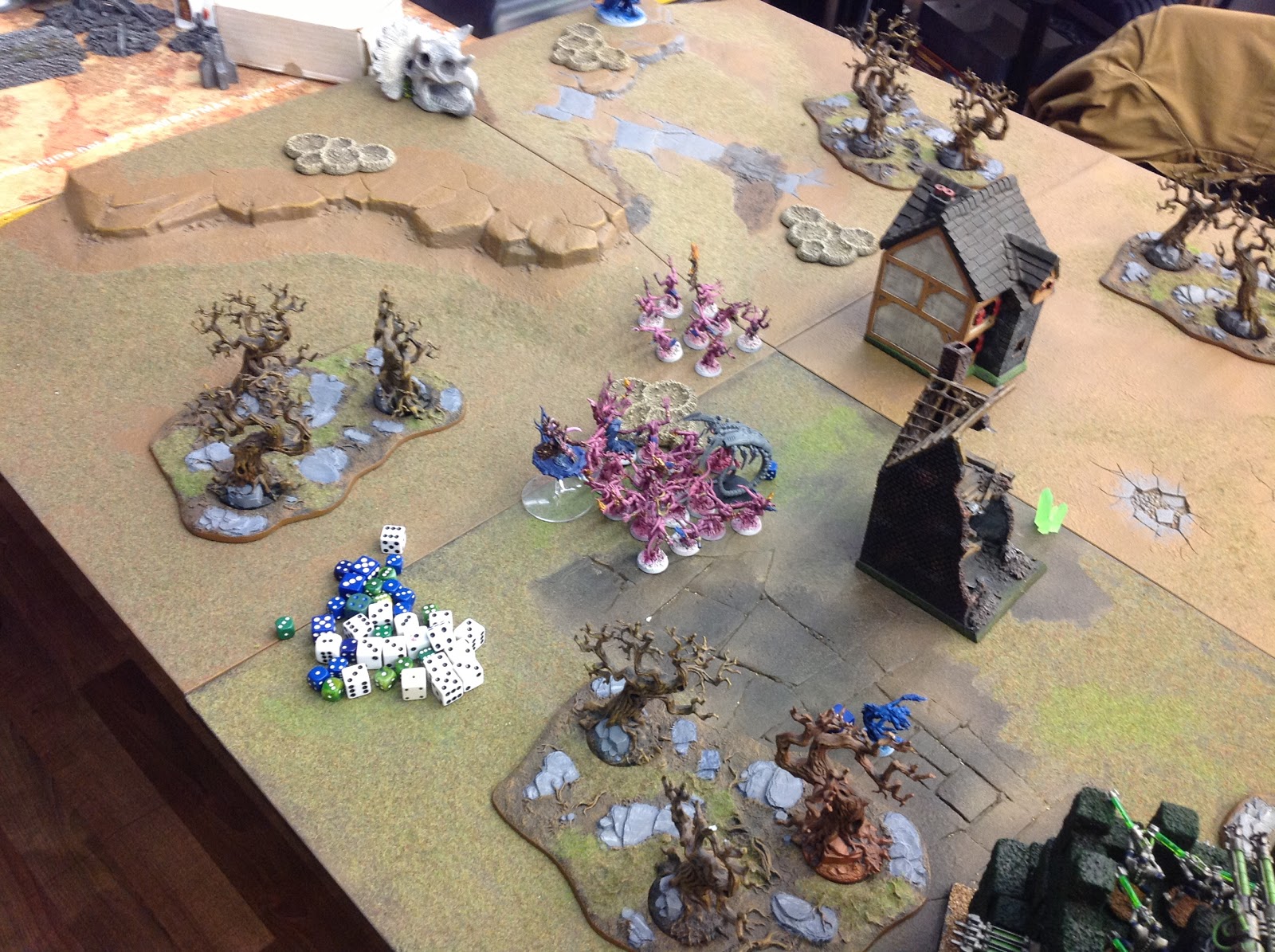 End of game.
Over all not much happened.  He killed my guys the got back up they couldn't reach the objective so I lost 3-0

Overall not a bad game.  The bastion was pretty useless.  I think I could have scaled down to a defense line and had more immortals or some other threat to bear.  In this game a monolith would have been nice.

Those flamers are nasty.  I am not sure how to combat them when they can deep strike ad slaughter squads in 1 go.  Next time I will probably bring out an IG list.  lets see how he does with jerks in tanks.