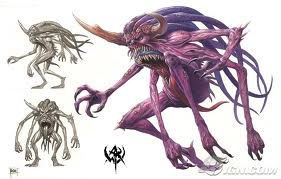 Last night I played Chosen1 from the blog Team Snake Eyes using my AdeptiCon friendly list.  He also used his friendly list. He was playing a themed tzeench list.  while some bad mishaps hurt him in the beginning he pretty much ruled the battlefield.

I would say the shooting was the win for him.  his flamers tore up one squad of genestealers his horrors did most of the rest.  His bolt was very effective taking out my zoies and tyrgon.

The shrikes are useless.  with only 3 they die really quick.  I am going to try a big squad of gargoyles.  This will also leave some more points to work with than if I shift around the genestealers, drop one or both broodlords, can get me another troop choice.  Maybe some termagants or hormagants.

It is something to think about.

questions and comments are always welcome.
Posted by Grenn Dal at 8:27 AM