Getting ready for the weekend!

This weekend is the first weekend of the month which makes it time for Fantasy Books and Games 40K tournament.  I have decided to bring my Tyranids. I have a slight variation on the list I had been using.  lets take a look.

So if we look at what I had before here we can see that I dropped the prime, shrunk the genestealer broods and added 3 ravenwers and a squad of hormaguants.  I am not sure the horamgaunts will be worth the 6 genestealers (3 from each squad)  I do know that 6 raveners should do better than 3.  I will keep the psychic power on the tervigon but I will roll the Dice on the tryant and broodlords.  nothing like a S 8 /T 8 broodlord.

I think that 40 points for a ravener might be expensive.  I compare them to genestealers so let's break it down. 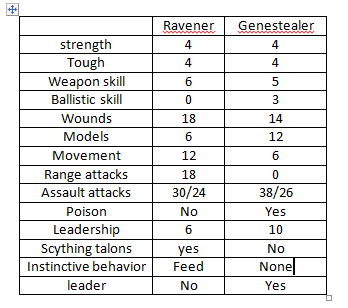 They have some similarities with above average WS, and the same S, T. The stealers will do better in combat with higher I and WS and posion attacks wich gives them rerolling most wounds and a broodlord that stands out even more.  The Raveners will have a easier time getting into combat with the beast move and lets not forget the 18 shots before getting into combat and get to reroll 1's to hit.

Some of the biggest differences is that the genestealers can operate independantly where as the raveners will break more often than not without synapse hanging about. though if they are out they get +2 attacks on the charge not + 1 so they usually have a good chance of winning the combat.

Over all I think they will both provide a solid threat for my opponent to have to consider.  We will see how they fair this weekend >.<

Have a good weekend all!