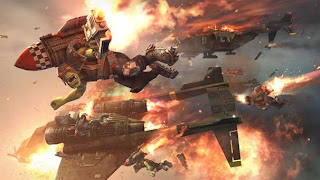 The last few weeks I have been playing my IG army.  The Vendetta is a good distraction and can do some damage. The one thing I have trouble with is landraiders.  (then again who doesn't) I still get the crappy rolls when I try to gun it down with my meltavets.  (Sigh me and the damage chart don't agree) Last night I made the same mistake I always do... move to far forward.  I need to hang back some more and fire more long range shots.

Which brings me to my next opinion.  The executioner Tank will have to be put away/converted into another tank.   I do more harm to myself than I do to others.  the last 3 games I have got hot shooting the main weapon.  I think I will drop the Ex and a Chimera and pick up another hell hound and another Vendetta.  this way I can have 2 guys flying around shooting blasting stuff while I have 2 burn-inators  running around causing havoc...

I will also drop the demo vets for grenade vets to get my 4+ back.  My last few games showed me how much that +1 save matters.  stupid AP5 bolters :)

Enough rambling about IG, like the title says, Orks are next!!  My new plan is to get a good solid 2 months with the boys.  I Now have a second plane and I think I want to change up the other one.  This will give me 2 Dakka Jets zooming around the board.  I also want to try out some Nob Bikers.  They are all the rage (>_< if you belive the interwebs) Last but not least, I want to try a weird boy.  Come on extra Waaagggghhhh.   It is funny that before 6th you saved your Waaaagh for that crucial charge, but now you use it for the extra Dakka!

I know I will not be bringing 30 boys any more. A mob that size is just to unwieldy. I think 20 boys will be good. I have to also weigh the pros an cons of bunching up.  If I bunch up then blast will love me but if I go for max spread and get charged I have a good chance of being out of the fight making me that much more vulnerable.  All things to try to figure out over the next few months.  Next week I will have my first list and maybe a summary of a game played with that list.

Either way it should be fun.   Orks always are.... unless you play against a certain ork player... no names but some of you know who I am talking about!