Battle for the Books 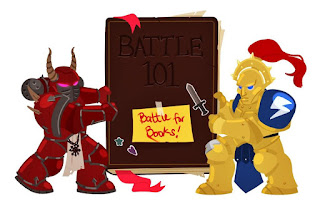 So, in my last post I talked about The Battle for the Books tournament last weekend.  Today I want to go over my thoughts and review what I remember from the games I played. Warning this is a long post. 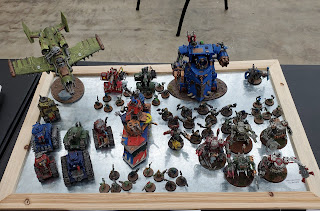 First, before I get into the games I want to go over my list.

I called this list Who Let the Grots Out. I crammed all the grots I could into the army.  If I had more Kans or more Grots I would have taken out the boys and the jet but then again I also wanted to run my custom made jet that just doesn't see the field very often.  I had thought that I had another box of grots that I could have paint up but they were hiding from my brush.

I tried to get as many of these as well as the main objective as I could.  Many people didn't have a psyker so I couldn't score Restoring Balance.  With my warlord being the Big Mek, I tried to keep him protected with grots using the stratagem grot shield.  At the same time I wanted to give him a good line of sight on many targets to help with the Man on Fire secondary. I also pulled a few important units through the games to score Spearhead.

My first game was against a marine army. My opponent army consisted of: There was an executioner repulsor, 3 large intercessor squads, a redemptor dreadnaut, a supressor squad, an elimiator squad, a captain,  a lieutenant, and an apothecary. 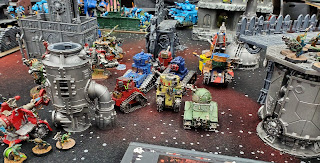 We got a game type where we chose one model as a courier and if we had to kill the courier to get the primary objective. I chose a grot and hid him in a corner. He chose his apothecary.   I got first turn and proceeded to put all my firepower into the tank. 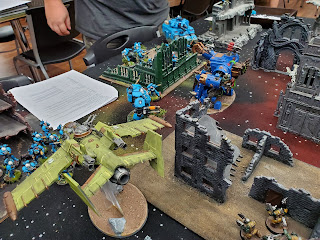 I did not take it down but it was on it's last bracket so it was hampered. I then charged in with the Gorkanaut and took out his lieutenant and most of a intercessor squads.  On my opponent's turn, he focused most of his fire into my Gorkanaut and ork boys.  He took out the Gorkanaut in his assault phase which dropped off my warboss.  This gave me a clear shot at his courier.  I took out his carrier and then took out his dread. Over the next few turns I took out most of the rest of his army.  In the end all he had left was an eliminator and part of a intercessor squad.  I had gotten all the secondaries except Restoring Balance. I was 1-0 going into the second round. 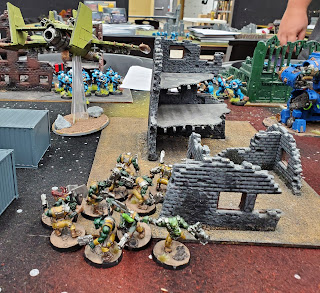 This gave me a clear shot at his courier.  I took out his carrier and then took out his dread. Over the next few turns I took out most of the rest of his army.  In the end all he had left was an eliminator and part of a intercessor squad.  I had gotten all the secondaries except Restoring Balance. I was 1-0 going into the second round.

My Second game was against The Lonely Havoc himself.  He was playing a Deathguard army with a lot of gross looking dudes and three of the new drones. 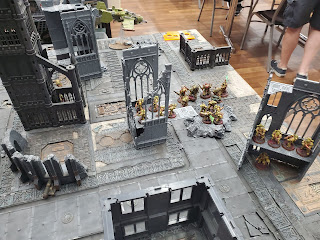 we played a game where the goal was to hold both objectives.  We had to deploy in the pointy hammer and anvil deployment.  There was enough terrain to keep my Gorkanaunt in my deployment zone. 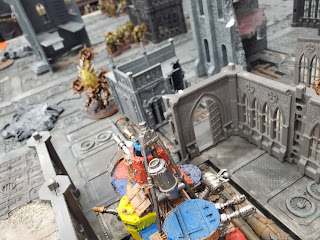 He sent out his drones and I stayed home trying to fend off those drones it was turn 3 before I could move out and I was to little to late to get down to his zone and get the point. 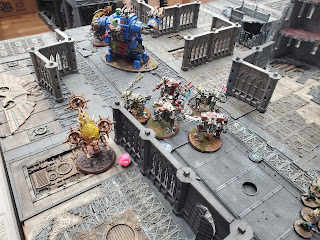 I feel I should have started him on the tellyporta I think I could have had a chance.  In the end I did get 4 out of the 8 secondaries and the 2 points for the tie.  I was 1-0-1 going into the last game. 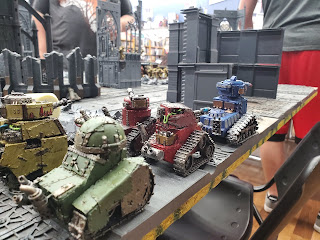 Game Three
The final game was against my friend Erik.  he was running a Deathwatch/ Admech army.  We picked the relic for game type and table quarters for the deployment.  I deployed aggressively, and he did as well. I was able to charge into his lines on turn 1 with my Gorkanaut and took out most of his Robots and Destroyers. 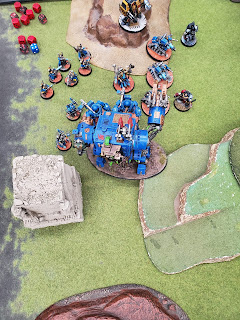 On turn 2 when he blew up Gordo every one of his units got hit by the explosions.  I then proceeded to roll 6s on almost all of his units.  When the smoke cleared he had a datasmith and a dreadnaught.  Again I maxed out on secondaries except for the Restoring Balance bringing me to a final score of 2-0-1. 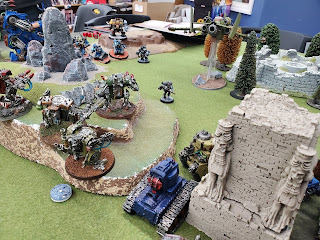 Results
In the end there were points for sportsmanship with everyone getting max points there.  either every one had a good time or everyone was to afraid to give their opponent a low score.  I have a blast with great opponents so I would like to assume that everyone did too.  There was a painting portion to our final scores the top 3 painters had points added to their totals.  In the end I finished with 45 points which was just one point more than the rest of the field to win the tournament.  I am glad I kept pushing for the secondaries in all my games they really added up.  The grand prize was a chainsword.  They were raffling off stuff all day.  I also won a box of scions.  It has been a while since I played them but my IG has a small detachment of scions. 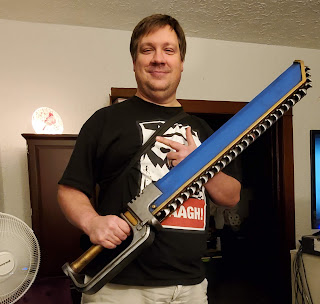 I had a great time and would love to do this again.  It is nice when you have a full day of games and there was not a WAAC player in sight. The atmosphere was relaxed and we just rolled some dice.  Speaking of laid back tournament I need to switch gears and turn my focus on getting my Shorehammer armies ready.