Greetings! Or should I say put on this hard hat?

While it says "Day 2" it should probably say entry #2, as this has been a multi-day project, but here's where we came from to where we are now. I'll add some tips/tricks about what I learned from this at the end. When last we left the project, we had four very cool pillars (that I could also use to create a vaguely water-world concept that seems to be percolating in my mind). 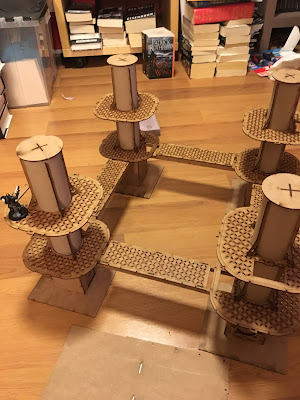 So assembly began on the base. Essentially many smaller overlapping rows of mdf lines cut very fine, having to be assembled just so. 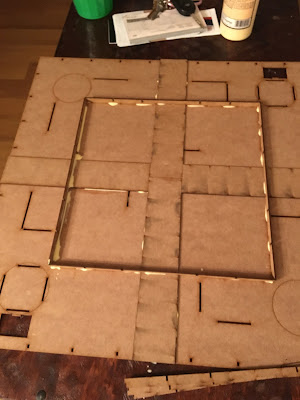 The hard part done, construction began on the buildings. A two story large one and a single story smaller one. 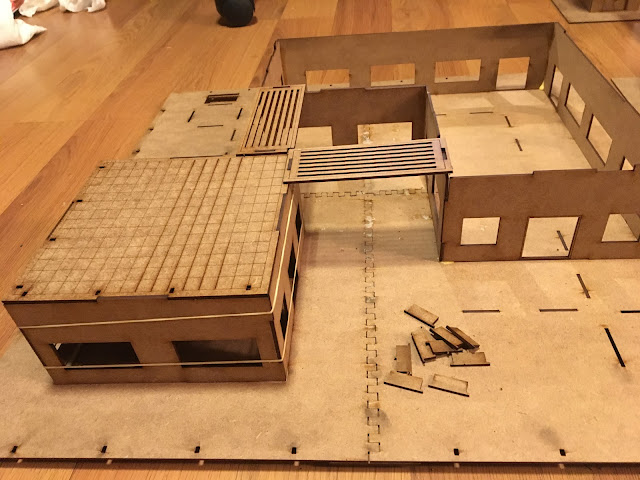 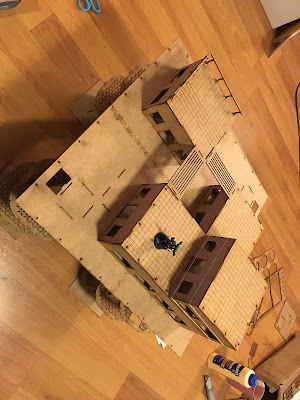 Sorry, don't know how to fix this one. The holes in the tiles are for ladders to climb through. 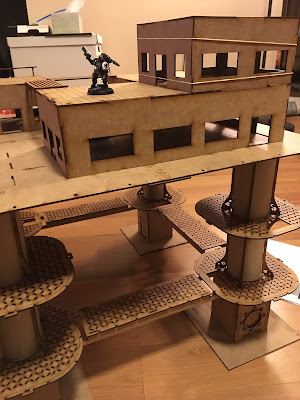 With a space marine so you can see just how high off the ground it is! 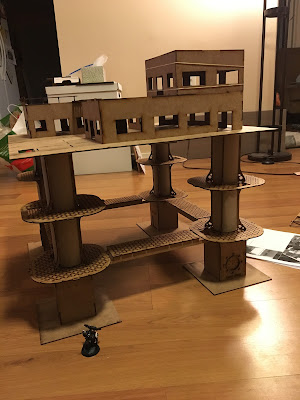 Construction stalled here for a few days until my Orlock gang took over. By that I mean they literally claimed a new base and proceeded to finish construction apace. Shotguns helped. 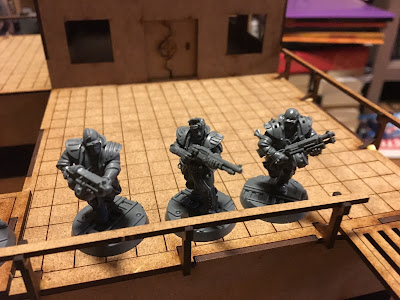 Railings added, a sliding door too. I'm not too keen on them since I'm a fan of playability, not really just immersion, and the doors are another piece to break. So I did one and I'm done, for now. 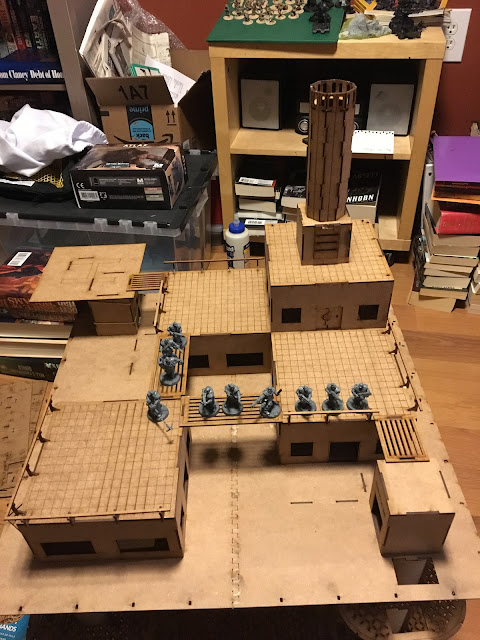 Status as of two nights ago. The chimney piece is moveable, allowing for additional cover to be placed anywhere I feel like it. 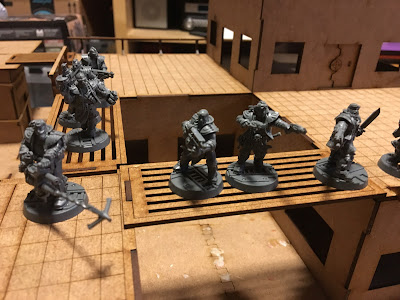 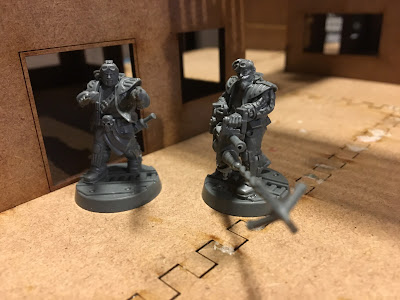 Orlocks exploring their new base. 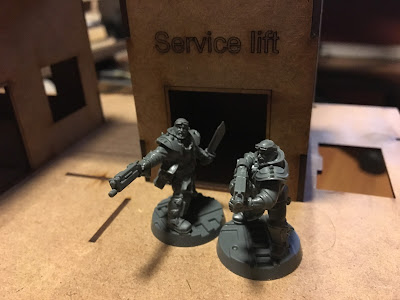 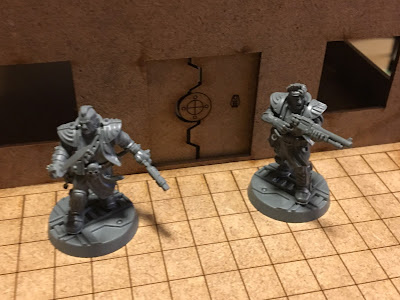 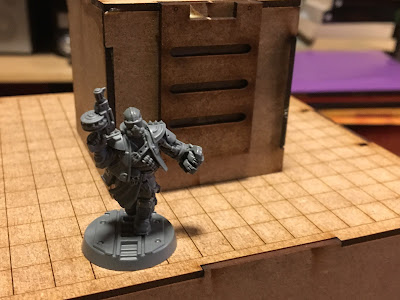 In addition to the movable chimney pieces, It also came with a generator. At first I was seriously confused about this part in the directions, as it appeared to have nothing to do at all with the rest of the build. Finally, I examined each sprue(?) of mdf and discovered the pieces. 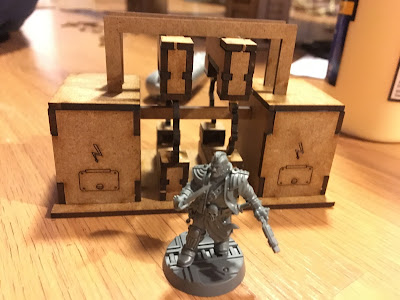 Can you see the mdf lightning pieces? They're tiny! 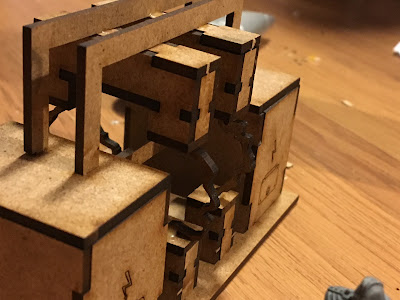 Next a quick railing build. 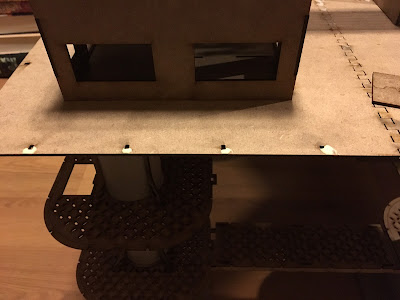 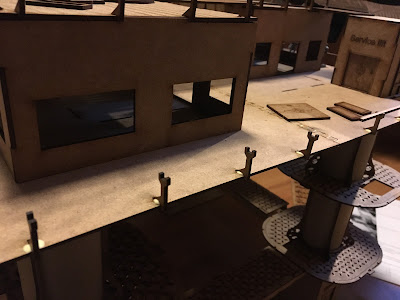 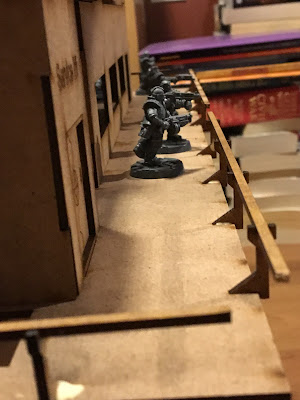 While glue is still drying, place glue on stanchions and include railing. Repeat again and again. Not shown: Use the right sized pieces of railing near the heli-pad/landing pad so you don't go into the wall. 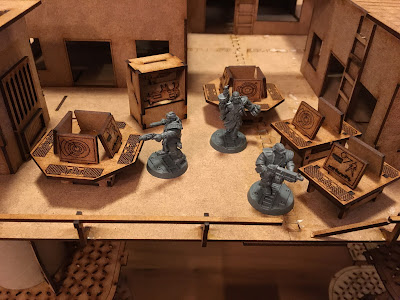 Finally, build all four control panels and both gun lockers, then assemble beds (not done, but will be done today). Add ladders and wall details for additional effect (shown above).

So overall thoughts at this moment in time.

WOW. Much Detail. Very Gluey Fingers.
And yet, very awesome. I'm really enjoying this build. Right now, I'm still debating adding the railings to the platforms below, as I think 1) They will take forever to build and 2.) I'm nervous about them breaking as it's hard to place figures in the bottom. I'll definitely do it along the walkways, but I don't really want to do it along the ring platforms. Thoughts?

Also, paint colors? I was going to try the old rusted red with salt and hairspray overdone by grey-blue since this will generally be in my desert environment board. But I'm open to other color ideas.

Also still waiting on some pipes to add more details (from china, so who knows when they'll get here) and some knitting mesh to put down as flooring details all over the place. The tops have detail but the floors don't so that will add some more realism in place of the doors.  Also mulling a crane.

Gods know I'm a glutton for terrain punishment. Oh, and this has to be done by mid-march, along with the Mars Board. Eek.