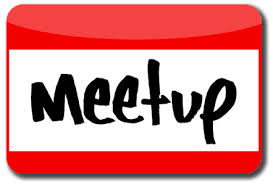 This weekend my Meetup group had a Gameday.  It turned out to be a small gathering but I had a great time anyway.  I had been fighting a cold and was sure I would make it but I was feeling better and they said get over here.  So I packed up my bugs, forgetting my tyrannocyte and mawloc, and join in the fun. 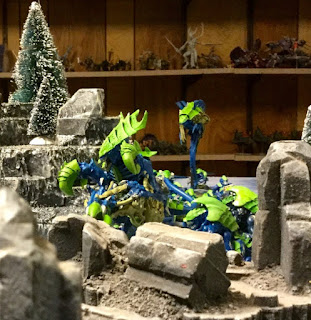 I usually stick to the same army.  tervigons, termagaunts, prime, flying tyrant, malanthrope and as many exocrines as possible.  This time I wanted to try out the haruspex, mawloc, and mucolid spores. Since I forgot the tyrannocyte, I substituted in more spores and had the haruspex walk.

I faced off an ad mech army.  Two sets of grav destroyers and a set of gun bots.  These heavy hitters scared my monsters and for good reason.  The tervigon didn't see the bottom of turn one and the haruspex vanished turn two.  I needed to deploy a little better to make use of the malanthrope's cover. 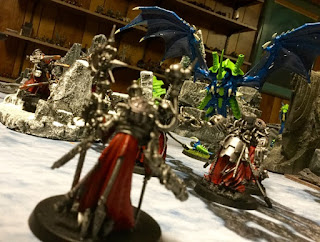 The spores are a bit of distraction, but they get shot down pretty easily.  They did their job taking some pressure off the other units, but he still had more than enough firepower to still have his big guns fire on the important stuff.

The mawloc came up on the second turn and wiped out a squad of rangers and put a wound on the robot's datasmith.  They shrugged it off and kept firing. He burrowed turn three then came up and killed two vanguard and was mowed down by said robots. 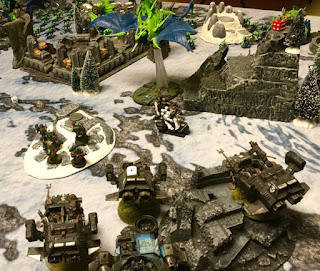 The second game was against the Dark Angels.  We played a 2000 point game and he had a Deredeo Dreadnought and a special landspeeder that had skyfire with a assault cannon and a missile launcher. I was worried about my flyers. 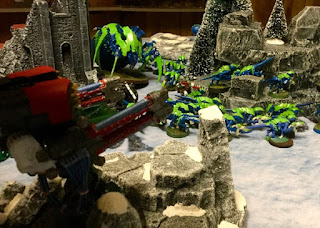 Lucky for me, his dice went frigid and my dice were smoking.  He just could not put enough wounds on my guys before we made contact.  By then it was all over. I think if he had more regular marines and fewer landspeeders he might have fared better. He just didn't have enough firepower to bring my units down.  His dice betraying him didn't help much either. 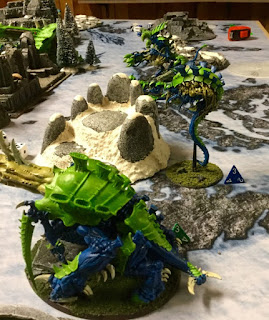 The spores didn't add much to this game.  When they came in I still had a lot of bug swarming around still.  They were just more fuel to the fire.

The mawloc came in and took out some of the speeders.  This helped to keep the pressure on and gave him another Toughnes six monster to worry about.

All in all, I might consider adding both of these units more often to my armies.  They both filled their roles well. I will have to try the haruspex another time when I remember the tyrannocyte.  I don't think it would have made much of a difference but you never know.

It was a fun day,  I look forward to playing them next time. Thanks to my friend, Kabbala for hosting, for letting me use your pictures, and the mawloc.  I need to get down in the trenches like you do to get the good shots!