Rumors: New Bugs on the horizon

There has been rumors about a couple of new Tyranid monsters coming out soon.  I found the breaking news on Faiet 212 and a picture on Forge the Narrative's Facebook page.  In case you missed them here they are. 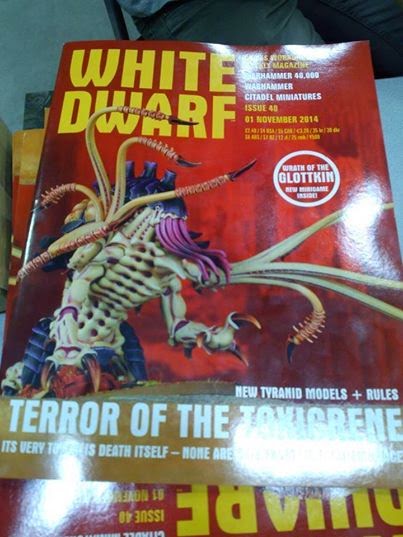 ----from Faeit 212----
Toxicrene
On a large oval base with 10 long tentacles and a face like a lictor.
A 5 wound t6 monstrous creature who is hypertoxic and shrouded. This means any hit gains instant death on a wound roll of a 6 due to a toxic cloud. This includes its close combat attacks and its choking cloud

Maleceptor
A 4 legged beast with two large scything talons
A psyker level 2, synapse monstrous creature that has an invul save of 5+. It has shadows of the warp and a 4+ save.

It has the psychic power psychic overload, which is a 24" focused witchfire. target must take a leadership test on 3d6 and vehicles count as leadership 10, failure causes d3 wounds no armor or cover saves allowed, and a causes a single glancing hit to vehicles, no cover save allowed. The maleceptor can do psychic overload three times a round, but cannot target the same model twice.

It can choose its remaining powers from the powers of the hive mind.

First I will take a look at the Toxicrene. This looks like another close combat monster that will not be able to survive most close combat encounters. Power Fists, hammers, and things of their like will just eat through this guy.  It is nice that he has shrouded but with his stats it looks like he wants to be in close combat.  If he has a high initiative, flesh hooks, and a bunch of attacks he might do ok. The problem then is that your opponent can just avoid him since he is moving a max of 12” a turn if he runs.  Most armies can avoid it long enough to gun him down.

The Maleceptor will help out on the psychic front adding in another 2 dice to your pool and comes with a nifty power. It will help get some glancing hits on some vehicles and help put a wound on a wraith knight or other hard to wound monsters.  The problem is a leadership test on 3d6 with a leadership of 10 is about 50% Then they will get an invulnerable save.  It is also for picking on one model since it is a focused witchfire.  I want to see his other stats before if it is only tough 4 then he will go down quick.    A 4+/5++ save is not a life saver for toughness 4.

All in all not what my bugs are crying for. Just like the Forgeworld monster it looks like these guys really just share some spots with current monsters.  I can’t see either one replacing my exocrine.  I might use one instead of a tervigon but the ability to spawn guants is still pretty handy even if they die when the tervigon does. I guess I will need to pick up the White Dwarf to find out.