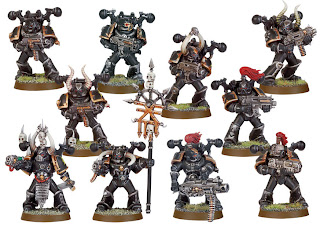 So I have finally decided to make a Chaos Space Marine army.  It will also be my first attempt at a fluffy army.  I am planning to make a Iron Warriors army.  I chose them because of what I have read about them.  From what I gathered they really didn't embrace the chaos but felt betrayed by the Emperor and the other loyalist.  They reject the "gifts" of chaos cutting off mutations and replacing them with bionics. 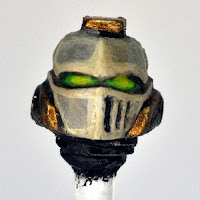 This will be a slow build with this army and prob will not see play for quite a while.  I plan on using the heads from Anvil Industies, and the bionic replacements from MaxMini to enhance my regular chaos space marine squads.

since they are the masters of siege warfare I figure at some point I will get a couple of Vindicators for them.  I don't plan on using the chaos vehicles instead I will you the loyalist one with any insignia filed off. I am just not into the whole spiky theme. 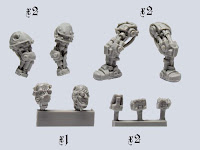 Lastly I don't expect to use any daemons in my army.  While reading the fluff I know that some of the iron warriors have turned into princes but once they do they disappear from the fluff.  I don't know if this army will ever see the game board or if it does, I don't think it will be very compeitive but it looks to be a fun long term project to grow allong side my Tau (who I have also deemed a long term project).

Well , that is all for today.  Let me know what you think. Am I going down the wrong path? Is there a Loyalist chapter that is similar in look and feel as the Iron Warriors that I should play instead?  Is it to late for me to see the "light"?