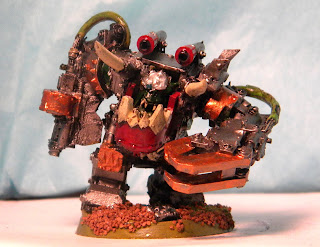 well it is another Friday. I played 40k last night, my ork list from last post against a foot heavy Vanilla Space Marine list.  My orks were victorious.  The mission was capture and control and we got pitched battle for our deployment.

My opponent did not have any terminators which let my boyz breath a lot easier.  the one big obstacle was his Land Raider.  Inside he had a chaplain and I do believe Vanguard vets.  he had first turn and zoomed his land raider forward 12 inches directly in front of my wagons.... on my turn my first wagon rammed him and exploded the raider and killed a vet then Ghaz and company moved in for the kill... unfortunately they did not make their assault through cover roll so they were left high and dry.   Meanwhile he had another assault squad tear through my koptas and then move out of range from my big squad of boys.

turn 2 he tried to get his assault squad into combat with Ghaz but was just out of range. his Vanguards did get into combat with them though and despite having 25 power weapon attacks he only killed 5 boys.  He did 1 wound on Gaz  and then 3 more boys went down to a power fist.  Ghaz and co. killed 8 of his unit.  Ghaz an Company were stuck in combat after passing their leadership test.

my turn 2 I had one battle wagon run over his assult squad and another ran over one of his tac squad.  No casualties thanks to 3+ armor.  my big mob of boyz caught up to his assault squad and killed all but the Chaplain.  Ghaz and Co. cleaned up the vanguads and moved toward his objective.

turn 3 the marines did some shooting blowing up the second battlewagon and whittling Ghaz and co down to 3 boyz a nob and Ghaz.  This was not enough to stop him.  My boyz finished off the second Chaplain and got ready to assault the scouts hiding in a building.

on my turn Ghaz cleaned up another squad of Tac marines and I rolled horrible on my assault phase leaving a bunch of boyz clustered up in the bottom of a building.  I moved my shoota boys back to my objective since they really had no target to go after.

The space marines took advantage of my boys being all clumped up in that building hitting them with a flamer and killing 9 but they still had plenty of numbers.  On my turn I did get the boys into combat with the scouts and they just dissapeared.  I moved my one remaining battlewagon towards his combat squad that was sitting in the corner the whole game while Ghaz squad contested his objective.  I was so excited to kill the scouts that I forgot to charge with Ghaz... stupid mistake.
On to turn five he shot at Ghaz and killed 1 boy.  Ghaz and Co assaulted that squad and wiped it out.  and with both objectives in had my opponent conceded.

The game went pretty poorly for my opponent with some fairly bad roles. After his failed assault on Ghaz he was going to quit.  I said it would be fine with me since he did not look to be enjoying himself but then he decided to play on.  It was a pretty one sided game from that point on though.  I am happy to play somebody but if they are not having fun it is hard for me to have fun. Oh well.

So my orks had some fun this week.  Next week.... NIDS! nom nom nom

have a good weekend