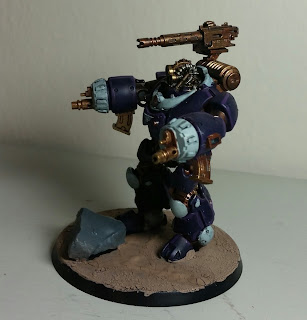 This weekend was a bit hectic.  I went to see Walking Dead at the Smithsonian, took a test in my Accounting class, bought and assembled a new kitchen work table, and played Disgaea 5 on my new PS4.  Among doing all of these things, I took some time to work on the Kastelan.

I have all the grey done as well as the highlighting, and I painting up the hoses and the lenses. Last night I laid down the Agrellean Earth on the base and let it dry.  I sealed it this morning before leaving for work.  The last part I have to do is highlight the rock.  I will probably have a showcase for him tomorrow.

I decided that I needed a bit more to make it pop.  There just was too much purple.  I added in the grey collar to break it up a bit and I think it works. 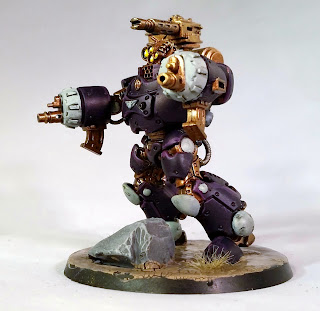 Comparing the two I think the newest one is better.  Looks like I will have to bring the otherone back into the shop.

While doing some pre-spring cleaning I found some warrior legs for me second prime. I want this guy to be the close combat version of my campaign prime.  I am going to add some crushing claws for the Maw Claw relic and then maybe some scything talons.  I might just put on some talons and magnets and use the arms from my tyrant guards for the other weapons.  That way he can have a bonesword, rending claws or the maw claws when I need them. 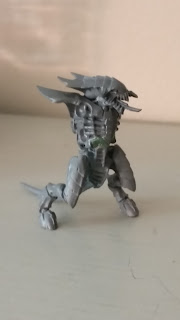 I love the ravener head.  I think the side fangs make him look more vicious.

After my Robot is done I have the Datasmith to work on and then it will be spores, termagants and this prime until the end of February.  Lots of work and so little time.

Have a good Monday.