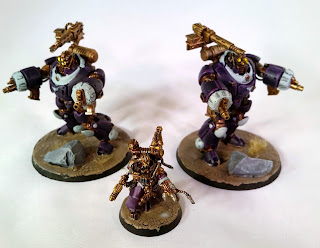 This weekend I finished up the work on the Datasmith for my Kastelan Robot Maniple.  He painted up pretty quickly.
When I was painting him up, I noticed he had a similar collar to the robots. At the time, I decided to paint it like the rest of his metal. 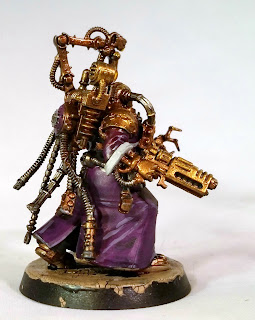 Now that I am done, after getting getting a good look at him, and how he fits in with the robots I am thinking about going back and switching it to grey to match the robots. 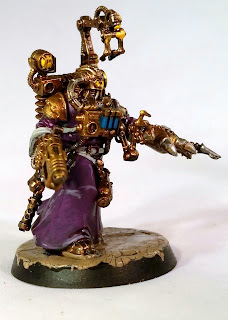 I am also on the fence on the vials on his chest.  I am thinking about adding a highlight to them to give them some definition.  They look a bit plain at the moment. 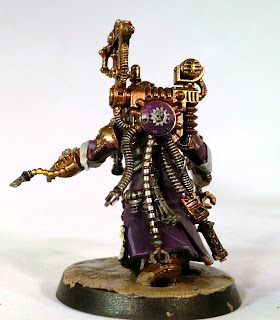 While painting him up, I was on the fence about painting the wires the flat leadbelcher like I have done across the rest of my army.  I dreaded trying to paint each a separate color and in the end I think the bare metal look works for me. 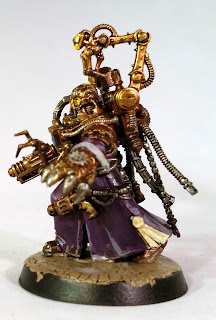 My last decision for this guy are the fingers.  Originally they were  Brass like the rest of the metal metal bits but, I though I wanted to break it up a bit.  I think it looks decent like it is but I wonder if leadbelcher was the right choice.  Should it be the accent color of grey or even Purple to further tie it into the robot armor? 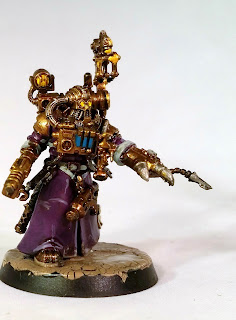 Next up are some Termagants and then I think maybe some orks.  Until then..

Questions? Comments? All your base belong to us?