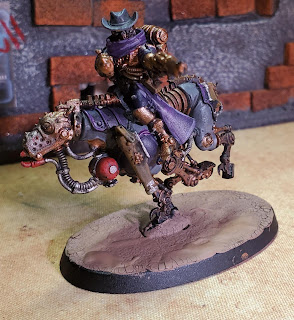 Taking a break from the Sisters of Battle, I wanted to paint up the newest Ad Mech unit: Serberys Sulphurhounds.This kit can create two different units.  The Serberys Raiders is equipped with rifles and swords while the Serberys Sulphurhounds, which I chose, have pistols and flamers. I like the the Raiders with the longer range and the ability to snipe characters but I wanted to have the flamer doggies. 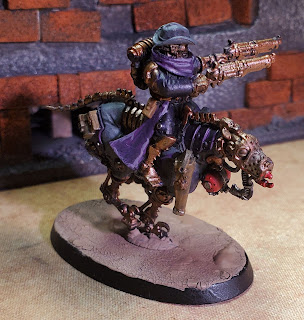 When GW previewed these quite a while ago, I knew I wanted to make them cowboys.  The guys over at Puppetswar had the perfect head, a robot cowboy. While the cowl does hide a lot of the detail of the head I am still pleased with how it turned out. 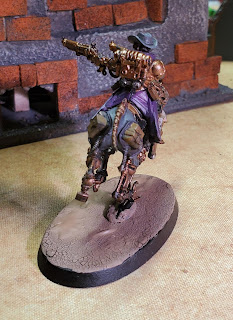 I first tried a brown hat but it was a little to much brown for the model.  I though I might tie in the purple of the other cloth on the model but I would think it would be too much of a pimp hat.  I decided on grey to tie into the hounds hide.  I think the Alpha will get either a white or black hat but I will decide that when I paint it. 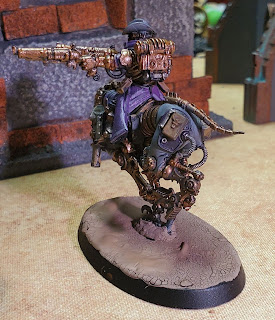 There you have my first Sulpherhound.  I have five more to paint.  I will eventually get another box to make a full squad but this is all I have for now.  I hope to get these all painted as well as a box of Pteraxii before the new Necrons come out.  That way I can concentrate on painting some xeno models as soon as possible.
Questions? Comments? There's a snake in my boot!
Posted by Grenn Dal at 10:09 AM