With the completion of my hellblasters I only have the centerpiece of the army, the fire raptor, left to complete for the league.  I thought It might be nice to see the army all set out as I look at where I have been, where I am at and finally where I am going. 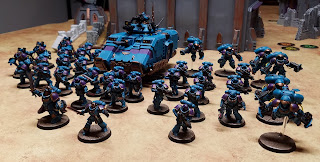 As of now I have ten Intercessors, eleven Hellblaster, six Inceptors, six Reivers, three Aggressors, a captain, a lieutenant, and the Repulsor. Not a bad little force.

I still have a few unpainted models to paint up after I am done with the league. On the table I have eleven more Intercessors, three Reivers, three more lieutenants and the ancient.  I want to get at least five of the Intercessors painted up quickly so I can field a battalion.    The others will be nice as well but are not needed like the Intercessors.

Looking ahead I would love to get a second Repulsor and a Redemptor Dreadnaught. I still would like to combine the dread and dunecrawler for a cool looking conversion but it never fit into the league. 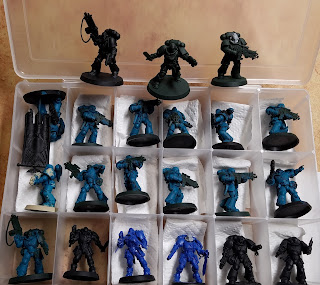 The league was a nice way to start up an army.  It kept me on task and gave me a challenge to work towards every month.  I am just sad I didn't get to play more.

Have a great weekend

Questions? Comments? Cawl's will be done!
Posted by Grenn Dal at 2:36 PM