So this week I had a surprise arrive in the mail.  Three new non Forgeworld grot tanks. I was so excited I had to assemble them. (sorry Sisters)


So back in November the site Models and Minis had a sale.  I saw these tanks at half the price of 4 Forgeworld tanks I decided to order them.  I was planning to use them during our big Apocalypse game. After not getting a update on when they would arrive for a month I reached out and contacted the company.  After several back and forths and promises that they are on the way I finally gave up on ever getting my tanks.  Then they showed up. 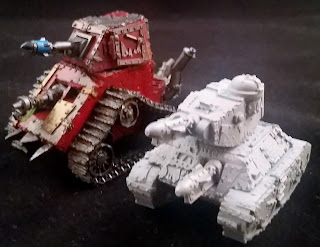 Ignoring the long delayed shipping, I really like these models. The sculpting is really good and the flash is easy to clean off. They seem a bit small compared to the Forgeworld  models but they are just as scrappy and cute. 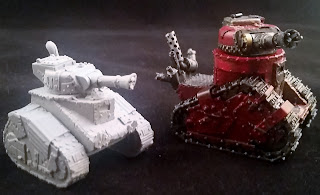 I kitted most of them with rockets because that is how I usually field them but I might try to magnetize them.  This would involve trying to break the super glue bond I used to attach them.  It is risky but who know when I will want a bunch of grotzookas.  Everyone swears by them.  I also am thinking about the low AP of megablastas. I just don’t know if the chance of a get’s hot is worth AP2.  Looks like I will need more field tests. 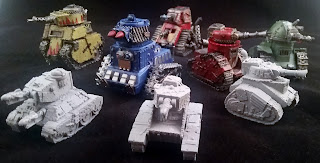 Once I decide what to do with the guns these guys should get some paint. It should be a pretty quick turnaround.  The hardest part will be deciding which color to paint them.