A New Era has Begun! 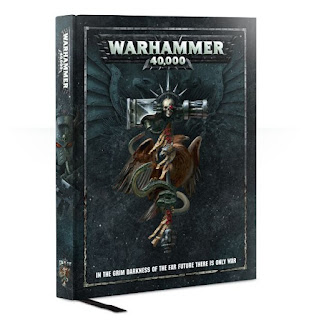 This weekend I had the chance to get in 3 small games of 8th edition.  We each played 1000 points army from a different faction.  Even though one game does not give a complete picture of how well or bad and army or unit is, it is a glimpse of what it can do or downfalls it may have. 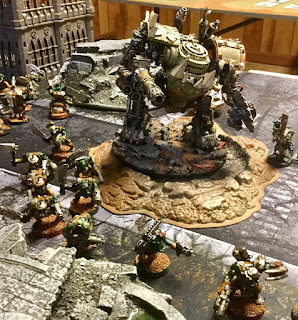 The horde is back.  I ran a couple small (20 boy) squads and the addition of Warpath and the Warboss Waaaagh! Really helps these guys out getting into combat and dealing some major damage.  I might try running them in a battle wagon to help get them up the field even quicker seeing that most opponents will try to stay out of range for a first turn charge. 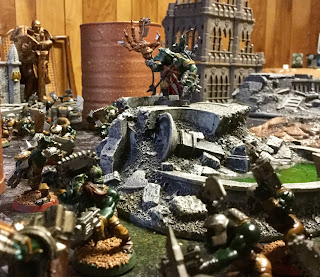 I also Proxied a Mega Dread for the Morkanaut.  I had planned to use this guy to give me the 5++ save while running across the field but the way my opponent deployed I had to split my forces.  The Morkanaut did alright, although my opponent didn’t have much to take him down.  It took 3 turns to get it into combat but once it did it was brutal. The shooting was very lack luster.  It softened a couple of raiders before charging in.  I think if my opponent had some dark lances he would have been in trouble. 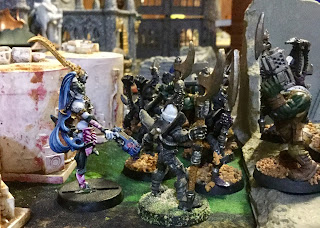 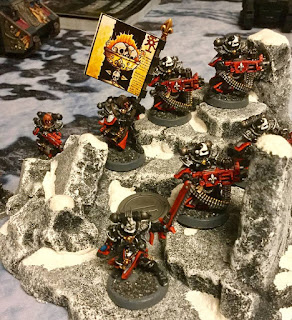 In the second game I took a very tank heavy IG list.  I had 2 hellhounds, 3 chimeras, a manticore, and a tank commander in an executioner.  I was very disappointed with the executioner seeing it went from 2 small blast to a straight up D6 hits.  I was hoping for 3D3 since the small blast normally became D3 shots but for some reason they took away some power. 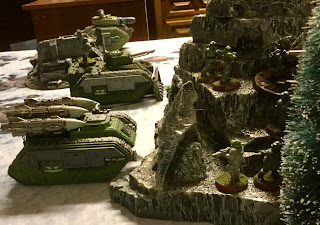 The star of the show was the manticore.  It seemed to do the most work for me.  Coming in close second were the hellhounds.  I do believe I will swap out the heavy bolters on those for more flamers.  The ignoring to hit is big in this edition. This goes double for guard since they only hit on 4s and when they move it goes to 5s.  You will not be putting out enough damage with that kind of accuracy. 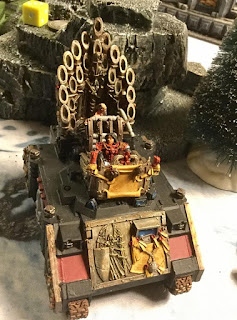 The one thing that I had going was durability.  Even damaged my tanks kept going.  In the end he just didn’t have enough fire to bring down all my targets.  If we went on to another round he might have stolen that game away from me. 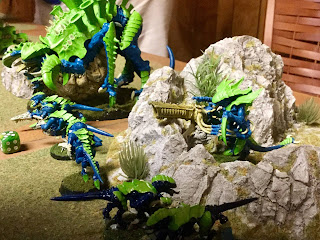 The last game saw my new and improved bugs just dashing across the field eating anything that got in its way.  Again I proxied a unit for the toxicrene and while he did not do a lot of damage he did hold the enemy at bay until the genestealers came in and wrecked face.  I did like the upgraded exocrine.  The longer range made it easier to reach targets and shooting twice made sure things died.
I am eager to try out the swarmlord and the trygon tunnels. A turn 1 charge can be an awesome thing. The faster bugs will help out where we were weak in the last edition.  With the rumors of the malanthrope only being 90 points I really want to try an old one eye bomb.  Delivering 2 carnifex and old one eye into the ranks no later than turn 2 will be a cool site to see.  Pair this up with a flying tyrant, genestealers, or toxicrene and the enemy might not know where to prioritize its firepower.  My bugs will be like Cookie Monster on a plate of cookies…. Nom nom nom. 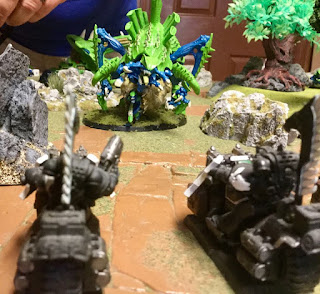 The game flows nicely.  I have to remember my psychic phases if I have them.  At least now they are not too long with only a handful of spells and the rest defaulting to smite.  A couple of big changes are the fight phase and how many wounds are all over the table.  I feel with some practice the fight phase will become less cumbersome.  I think I need some wound counters to keep track of wounds.  I have a couple of ideas and will post them on here if they pan out.  I also saw a few nice ones out there if my ideas don’t work out. 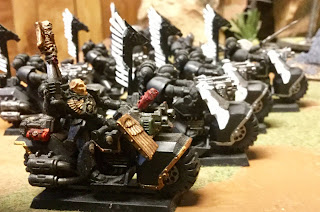 A minor complaint I have is all the randomness of the weapons.  That D6 might be awesome! It also has an equal chance of being crappy.  If you roll like me, you will see the crappy side more than the awesome side.  I wish most of the D6 were changed to be more like the dunecrawler.  The dunecrawler's neutron laser has D6 damage but a roll of 1 or 2 is considered a 3.  This really nullifies the bad luck rolls.   Then again, this is 40k, random is always a major factor so I really shouldn’t complain.

So in conclusion 8th edition is fun.  I look forward to playing more games and getting the hang of all the changes.