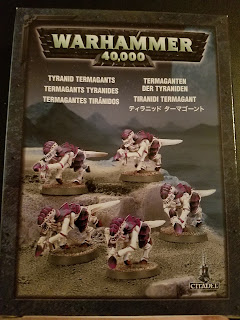 In 8th edition, the role of the lowly termagant has changed slightly.  Sure they are still cheap little guys that help bubble wrap our larger monsters from charges.  The difference now I don't need the never ending supply of models since the tervigon doesn’t make new units unless I set aside points for it.  This means that I don’t have to worry about not having enough models when it is time to make more guys since I am only replenishing models that have died.  So, when I found a fresh box of termagants I thought why not makes some hormagaunts.

The two units are very similar.  I even have some hormagaunts that I modelled as termagants.  So how hard would it be to go the other way. I found out it is not too hard. 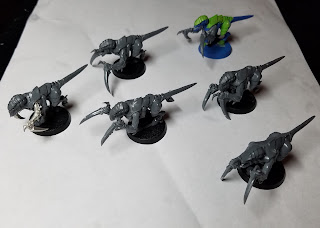 First up I cut off the front arms.  I tried to make the cut as flush as I could.  I then tried to touch up the chest and arms from where they were molded onto the front arm a gun.  After that I took some leftover scything talons (I admit these are probably from some genestealers so a little big) and cut off the ball joint so it can join with the flat socket. 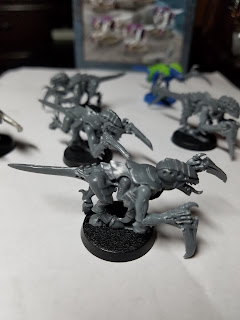 I find the result acceptable.  After I paint them up and I mix them in with 14 other friends they will fit right in.