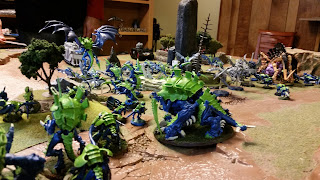 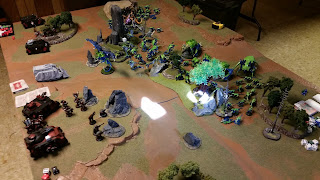 We played 2 large games. The first one was a 2 v 1 where it was my tyranids versus space marines and sisters of battle.  The lack of anti-air units on their side left my tyrant free to fly around and attempt to take out the supporting tanks.  He did perils as usual but lucky for me he didn't get grounded. We ended the game early so we could play another game with a 4th member who came in late.  I think if we went to turn 6-7 I would have had a hard time pulling out a win. 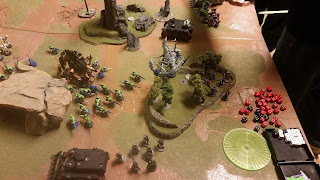 My tervigons ended up not creating a bunch of extra troops. This could have cost me late in the game as the numbers of my horde was dwindling and all I had left were my monstrous creatures. As usual, the exocrines performed well.  I need to work on when to use the 6 shots and when to use the blast.  I think a couple of times I used the blast where the shots would have done better. 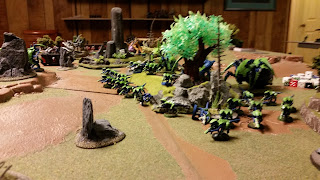 I want to try some thing different so I used 2 squads of raveners and a squad of shrikes and while they all got into combat, once they cleared out a unit they were sitting ducks for bolter fire in the next turn.   The walking tyrant was a waste.  I don't think he did much besides give synapse which the tervigon could have done just as well.  I need to look at a different load out to get him into the fight if I am going to use him again. 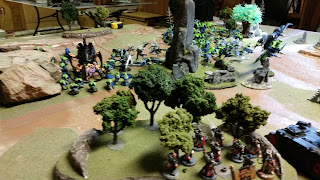 Looking into updating the swarm I think a third exocrine would be nice.  I think I will add back in my cover makers: the venomthropes and malenthrope.  I think they are a big asset to the team.   Lastly, I think I could take out the tyrant and guard and add in a carnifex with a drop pod for some back line scares. Not that I think he will be awesome but it is something different. It will also give me some distraction from my oncoming units. 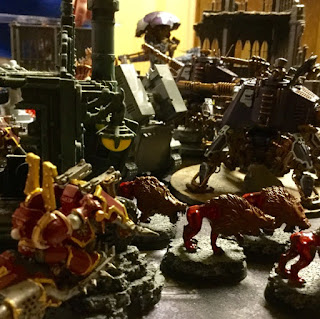 The second game was my Skitarii partnering up with some space marines versus Khorne Daemonkin with some Nightlords (blood angels)  This was my first game with the skitarii so I knew I would make some mistakes and sure enough  I did. 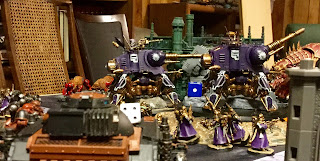 First, I assaulted on turn one after infiltrating.  I should have caught this one early on.  I need to figure out what to do with the infiltrators. right now they feel like sitting ducks.  My second mistake was applying the debuff of -1 toughness outside of combat.  I confused the vanguard  power with the infiltrator's power. Luckily this did not really change the outcome of the game. 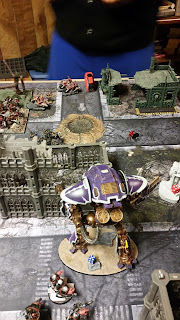 The dune crawlers did pretty well.  I think they need the servitor arm though since they got caught by a mauler fiend and just died to it's attacks. I should have had some units screening in front of them, live and learn I guess. 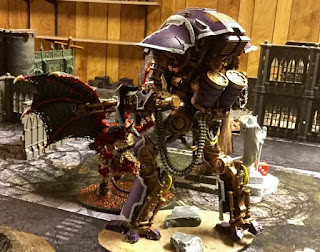 Lastly the knight did as well as expected.  He went around stomping on units laying down the big flame template and being a pain in the butt.  He killed a bloodthirster and several other troops. but he is only 1 model and can't be everywhere.  They had him down to 3 hull points and might have been able to bring him down in another turn or two.


I think the consensus is that he is an apocalypse unit.  While it can be brought down it is just a bit overpowered for casual play. I have the feeling that the super heavy and gargantuan creatures are just too much for casual play.  I will keep him out until a apocalypse game comes up. If I was playing competitively then sure but I want everyone to have fun.


So until I finish up the army my Skitarii goes back to rebuilding and bolstering their ranks.  The Knight goes back to being a display piece until needed for the big games and my nids get to prepare for their next meal.  Which might be next month with a little luck.