Mechanius Troops are the Servitors

So the big rumor this week is that the Sevitor guys are actually the troops.  This does not rule out the priests as troops as well but with the limited count of models I would doubt there would be 2 different troops in this release.  That is unless this kit makes a troop and another slot along with the priests making a troop and another choice.  Right now all we have are rumors and some rules for the Servitors.

Over on Spikey bits forum Captain Citadel left us with this info:

So it looks as if there is 2 types: Ranged and melee. I also heard about a high stregnth AP 1 shot as well but I can't find it any more.  I was probably dreaming.  The sad news is with these guys coming out as troop I actuall might want an ally for the Skitarii.  I could see a small force an HQ these guys and a group of robots helping out my quick little bugger.  I guess we will have to see. 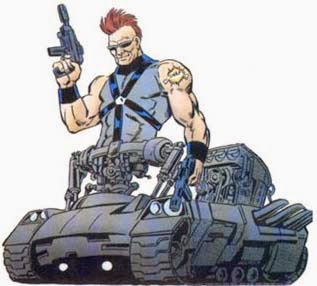 I has seen some daydreamers saying that there might be a codex to rule them both and I won't have to get either of the other 2 codicies. Then again, the armies might lose some of their fluff or special rules if used in a combined codex.  Oh well, I am a long way from playing so I will worry about it later.

In the end I think I am still going to stick to a Skitarii force.  I like the looks and rules.  If only the dragoon had some ap2 melee attacks....