Shard of the Void Dragon 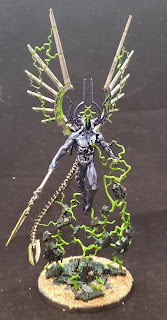 With the Nightbringer finished it is only fitting to work on his brother the Shard of the Void Dragon.

I ran a couple of polls in my Facebook groups asking if I should get the King or the Dragon. The King actually won by one vote but, when my local store was having a sale, they were unfortunately out of the King so the Dragon won by default. 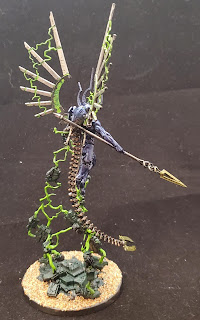 I went with my metallic blue for the skin while using the green that I used for the skin of the Nightbringer on the rocks. The green electricity will tie into the swirling vortex. Finally I used the same green nail polish on each of the weapons. In essence I had the same color palette for each model but each had a different primary color.

This model was a challenge. I tried to do some blending from the wounds. I use Runefang Steel that I blended into the blue. I am sure it could have been better but I am still working on my blending. While I consider him done I might go back and add some white highlights to the electricity to give it a little more pop but or some edge highlight to the rock.  I think I have done a decent job and I just don't want to mess up what I have already have done. 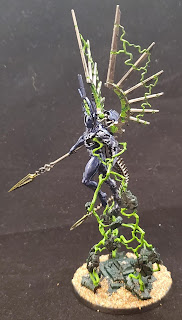 Next up are some ophydians. I found these to be the hardest models to put together so far. I need to be patient in-between steps and that is just hard for me to do. Wish me luck!