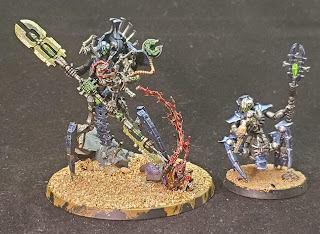 So I know I said I was going to finish my Pteraxii before working on my Necrons but the Illuminor was calling my name.  I picked up the big guy last week, built, and painted him in time for the 9th Edition release. 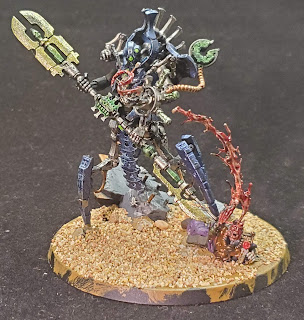 As you can see he is much bigger than the previous version.  Looks like the Primaris are not the only ones upgrading themselves. He is almost twice as big as the old model and it is a much better sculpt than the old finecast model. 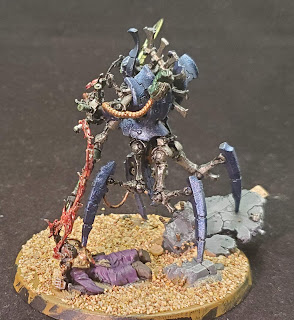 He changed up his rules as well adding a new Empyric Overcharger rule causing any Psyker to perils on any time a double is rolled for a psychic test within 9" of Szeras.  Not the greatest psychic defense but better than nothing.  He also has a rule where he can upgrade a unit if he kills a model in the fight phase.  I never really tried to get him in combat since he was more of a support character but it looks like GW wants him in thick of things. 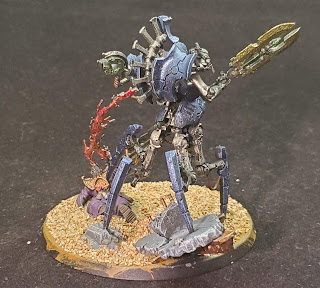 Another suttle hint that GW wants him in close is his weapon.  It used to be a 36" Assault 1 S8 -4AP with D6 damage.  Now, it is 18" Assault D3  S8 -4 AP with D6 damage.  Even though it was one shot I liked the longer range.He could sit back and stand behind some troops and deliver some pain from a distance.   The Necrons  are a bit lacking in long range shots and with this change they lost another option.  I feels like the new Necrons just want to be in your face even if their troops suck at combat. 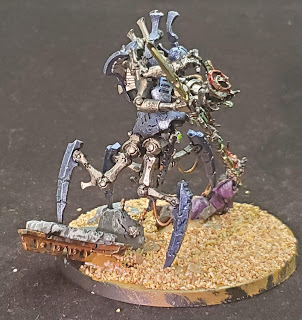 I still have some tidying up to do around the base.  I also want to do some more detailing on his victim. But he is close to being done.  I still have some time before the new box set comes out so maybe I will get those Pteraxii done.  Have a good week everyone.
Questions? Comments? Pew pew pews!
Posted by Grenn Dal at 1:56 PM